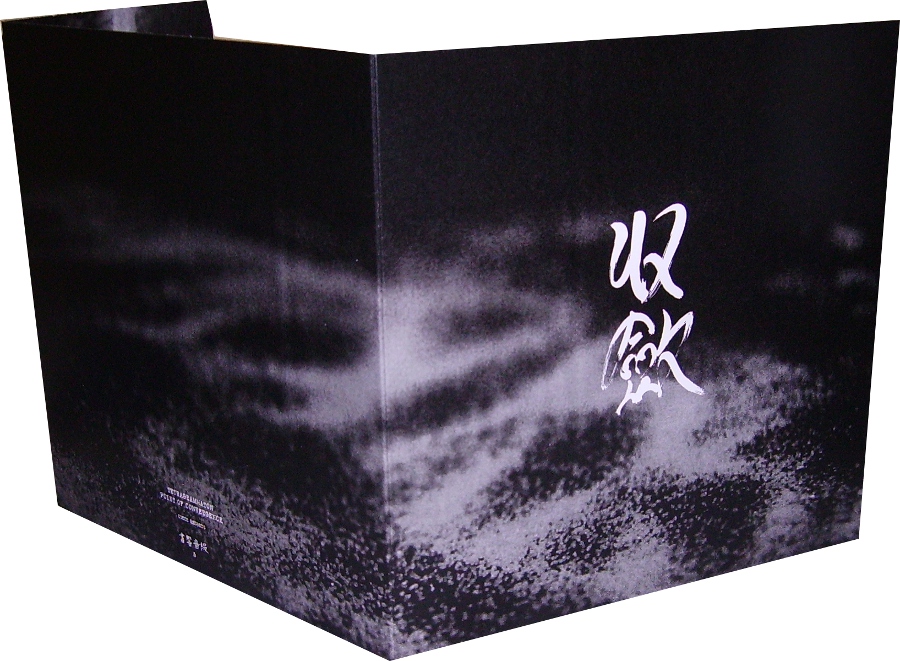 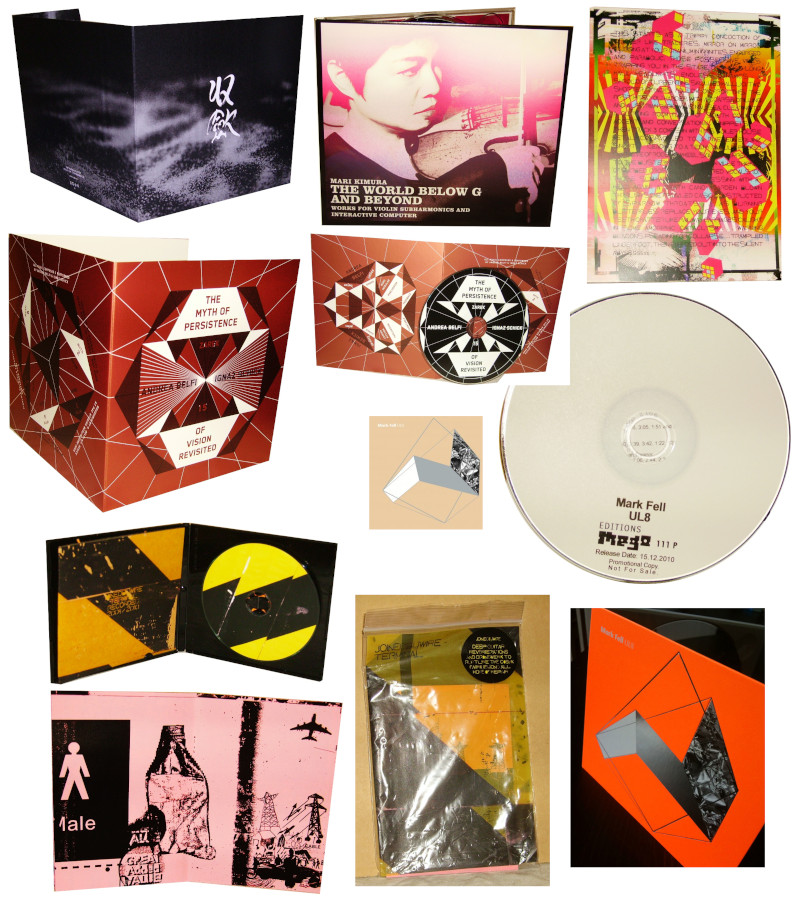 Another enjoyable set of sprawling drone and percussion music from the cosmic trippy psych-improvising trio Tetragrammaton, whose Point Of Convergence (UTECH RECORDS URCD032 / SHOKYO ONTEI 5) album just seems to keep on spinning into oblivion with its lengthy tracks that just won’t quit. I get the impression this threesome could keep on churning away long enough to fill a six-CD box on any given afternoon. When you look at the credit listing it feels like the balance of instrumentation is in favour of percussion, and that they can’t leave their collective flats in the Shinjuku district without drawing snide comments from the neighbours about “armoured tanks” or “living batteries”. Yet spin the disc and what emanates mostly is huge slabs of deep meaty drone music, emerging from the outsize saxophone (even the keys require two derricks to operate) of TOMO, who also finds time to operate the hurdy-gurdy with both unshod feet. Cal Lyall supplies keyboard and guitar work, firing heavily psyched-out acid salvoes from that monstrous axe as needed. If you can endure the overall shapelessness of their assaults, and indeed even count that approach to be a blessing and a boon, then by all means strip naked and dive into their black pools of musical asphalt, from which you’ll emerge caked in briny tar and embedded with exotic shellfish. Jamie Reed’s cymatic cover art is something you’ll want to put on the wall alongside the cover to the famous swimming pool LP by Yoshi Wada.

Long overdue notice for Joinedbywire, the angsty English combo whose debut album Black Axis 1-4 spoke many volumes about the personal pain and sufferings of these Bath-based players. They’ve released Terminal (NO NUMBER) themselves as a 3-incher CDR in an edition of 50, in a thoughtful and striking package that dwells on the inescapability of burial inside landscapes packed with menacing pylons and other agents of death. Their intensified approach to spiky guitar noise and gritty electronic drone is impolite, unhealthy, and psychologically twisted; everything a maladjusted listener could desire, in fact. Littered with barely-audible echoed voice segments, samples and loops that will haunt your tormented soul forever, these 20-plus minutes of clogged-up sound are deeply affecting, English to the core, and mesmerisingly lovely in spite of the band’s avowed intention to “rupture the cosmic fabric beyond all repair”. Arrgh – ashamed to say I’ve had this one in the backlog queue since August 2010, but here’s hoping you can still buy a copy.

Arrived November 2010, one fine package of art music from Mutable Music in New York. At this time we must note the mad violin cavortments of Mari Kimura, who makes powerful use of the subharmonics from her strings of diabolique charm on The World Below G And Beyond (MUTABLE 17542-2), sometimes solo or interfacing with a computer set-up in extremely avant-fashion. Baritone singer Thomas Buckner is represented on one track as well. No matter how insane, over-wrought or dissonant her music may become, Kimura remains in full control of her instrument, at times conveying the strong feeling that she’s wrestling with a particularly wilful and restive big-eared bat who wants nothing more than to return to his fruit caves. but Kimura’s having none of it.

Very nice to see an old favourite Ignaz Schick turning up in such well-designed livery on his own label; The Myth of Persistence of Vision Revisited (ZAREK 15) is one of the most handsome geometric covers we’ve seen here for a while, with a title straight from the pages of Jorge Luis Borges (or rather perhaps a literary critic writing about Borges). It’s a duo with Italian percussionist Andrea Belfi, and Schick contributes bowed objects, a turntable, and a “looper pitcher” to the improvising picnic. Attractive fuzzy surfaces and effects throughout, but in terms of performance it’s rather a subdued outing from the duo, where percussive objects are brushed endlessly around with circular arm movements as though they were making a chocolate cake mix without the aid of an electric whisk.

Here’s another corker of precise electronic minimalness from Mark Fell, not very far apart in style or release date from his Raster-Noton record Multistability. UL8 (EDITIONS eMEGO 111) seems determined to take the idea of stripped-down process music about as far as it possibly could go, exhibiting a severe and single-minded preoccupation with the interaction of electronic signals with a loudspeaker and not much else. According to Fell’s story, it dates back to his early amazement with the Celestion UL8 speaker when growing up in York, and how to him a single synthesized square wave had more power, oomph and sheer noise-poetry than 100 LPs of heavy metal guitar. If Mark Fell had been the technical consultant for synth-pop bands like The Human League, popular music of the early 1980s woulda taken a radically different turn and the pages of the NME would have been virtually empty during those crucial years. Incredible, inhuman and impossible music, that at root is “about” nothing more than its own means of production, yet still generates sublime results. Take this one home and try it out at high volumes, be your speakers Celestion, Wharfedale or Rogers, and see if you can train your brain to keep pace with its ultra-rapid and unfathomable developments. Visually, I offer an image of the promo edition I was sent and two web images, one of which is created by Peter Rehberg.