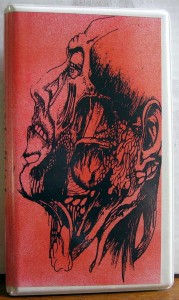 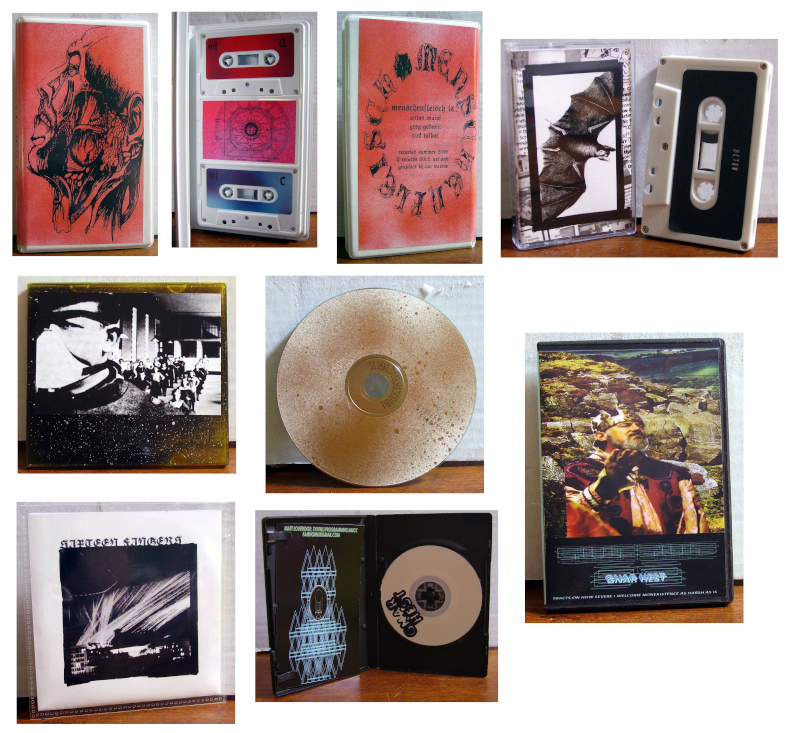 Fine package of alienated spew from LF Records in Bristol which we registered in the packing bay on 4th January 2011. LF013 is a split C30 tape by Betty and Little Creature. The Betty side starts out with some unbelievably fine chaotic, fractured electronic and collage monstrosities, after which it settles for dishing out nightmare drone chords cut open with distressing samples of agonised human shrieks. Little Creature proposes that we swim in large vats of tension-filled electric sound on their side, and also delivers some examples of lo-fi acoustic outsider-rock in the mode of Sebadoh, which is pretty testing listening; a shade too attenuated and incoherent for me, but it effectively limns a portrait of strung-out urban desolation. An unsettling little monster of a tape decorated with a picture of a black bat spinning to its doom in among a collage of magazine texts and pictures of the streets. “A couple of my favourite droogs in UK noise today,” claims label owner.

I found more substance for my shredded eardrums on the self-titled “double-album” (LF012) released by Menschenfleisch, two long cassettes of ugly grind produced by the trio of Anton Maiof, Greg Godwin and Nick Talbot. Hot weather, alcohol, sweat and vomit all seem to have played a part in the realisation of these four scorching sides of abrasive electrical sewage, where the pumping devices are working overtime to dredge foul substances up from below the surface of the earth and numerous crystal radio sets are tuned to inhuman stations on planet Mars that are fit to disrupt clear thinking. Fuzz, distortion, shrieks and feedback are clogged together in such thick clumps it’s a wonder they were able to breath in that foetid swamp of a studio. However, it’s not a totally remorseless set, as the simpatico trio have found inventive ways to give each other space to unleash their respective table-top horrors, and the music offers strong dynamics while still remaining true to the chosen aesthetic of the coarse and stinky. Ian Watson (Phantomhead Recordings) drew the visceral cover art of a flayed man stoically accepting his intolerable situation; a visual motif which has been inseparable, it seems, from industrial and noise records since about 1980 onwards.

Greg Godwin (who also happens to run this excellent label with its tiny hard-to-get editions) also records as dsic, whose corrosive noise records have never failed to elicit enjoyment in this writer’s neural capacitors. His Roman Birdhouse (LF016) is a mini-CDR packed with five short stabs from his acid-filled fountain pen, and the hyperactive and tuneless noise delivers such weight and volume that it’s hard to conceive these grumbling beasts were put together inside a computer. Maybe they weren’t, and instead he uses his laptop in magical ways to subdue supernatural forces (semi-human imps and demons) which beset him as he seals himself inside his private performance space to realise these growly scrawls. There’s a plausible theory about prehistoric cave paintings that suggests they could have been executed by artists retreating into a private, visual world of their own and conjuring visions; which is why many of them are located in very hard-to-reach places, such as at the back of a narrow cave. On recordings like these, dsic resembles a modern cave painter wedged in just such a tight space. Will he emerge alive?

Similar sympathies are elicited by the self-titled CDR by Sixteen Fingers (LF014), which exists in an edition of 20 copies only, and is deliberately intended as a prime example of irredeemably hopeless electronic despair. Some tracks are angry and fragmented, like a blind and infuriated teenager smashing his head into a television set, but my favourite tracks are those which exactly resemble the thought processes of chronic desperation, all interiority and inevitability, where sheer futility is all that can be gathered in one’s mental fingertips as you feel your very brain unweaving itself like rotted fibres. Whoever made this ultra-edgy record is seriously up against the barriers; proof that noise like this can be truly therapeutic if left in the right hands. Let’s hope the creator exorcised at least some of his two thousand inner demons. An essential blast of true mental sickness!

Gnar Hest is Matt Loveridge, crediting himself with synths, programming and “muck”, always an essential ingredient in the compositional process. His Tracts On How Severe I Welcome Nonexistence As Harsh As Is (LF 017) is another mini CDR, and oddly enough turns out to be the most “melodic” of this batch. Sequenced layers, drones, rhythmical throbbing and restless knob-twiddling coalesce for twenty minutes to create a very thick wodge of analogue electronic meat, which Gnar Hest slices into huge hefts with his sword while ladling heavy gravy from his free hand into your slop bowl. I’m sure it wasn’t his intention, but this comes across as a kind of wonky and drunken Rick Wakeman record, or some forgotten out-take from the Mo Wax vaults fed through a fourth-dimensional blender. The creator is apparently quite young and fresh-faced and the label is touting this record, partly tongue-in-cheek, as a species of avant-garde underground dance music. Expect to see a heavy 12-inch slab from Gnar Hest in BM Soho any day now.