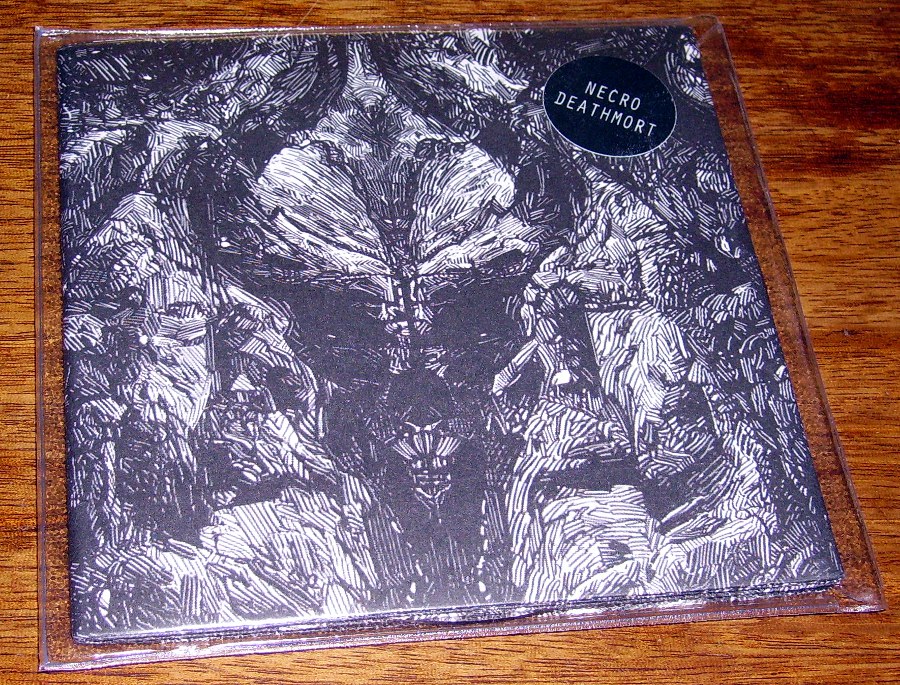 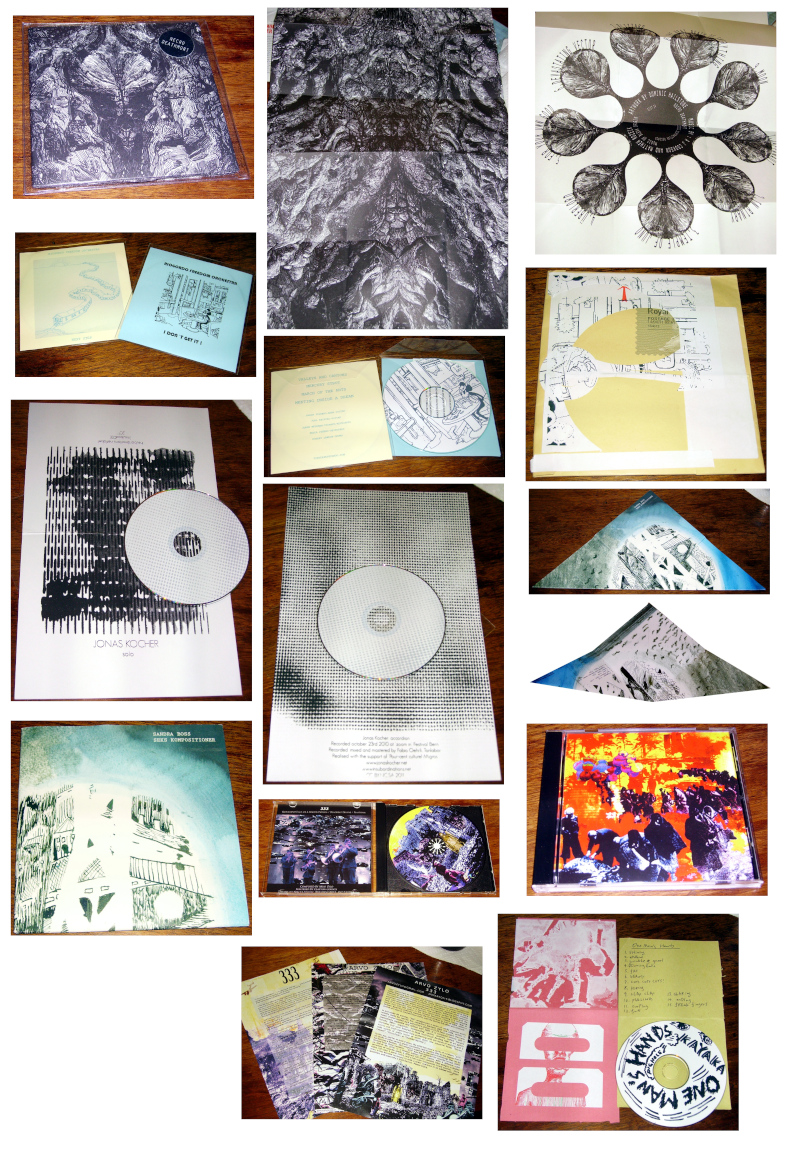 Arrived 12 May 2011: Necro Deathmort with their Music Of Bleak Origin (DISTRACTION RECORDS DIST24); last heard from Newcastle duo Rozeik and Cookson in 2009, and what they create is a vaguely sinister form of electronic instrumental music laced with many beats and great attention paid to detailed, richly-encrusted synthetic drones. This polished, blackened ambient-dub music is like a slightly darker version of Massive Attack made in a smaller studio, although the track ‘Devastating Vector’ edges towards the sort of synth-laden excess with a rock beat which Richard Pinhas is creating these days. I don’t quite hear enough metal guitars for my liking in the Necro Deathmort mix, but the disc pounds out plenty of entertaining and polished grooves. Remarkable fold-out cover poster is drawn by Dominic Hailstone.

18 May: two CDRs of restrained and friendly jazz-tinged improv from the Riogordo Freedom Orchestra, titled I Don’t Get It! and Next Step (TINYTAPES NO NUMBER). The core combo is Javier Denis, Jorge Weinken, Robert Lawson (who runs the label), Alain Pignero, and his young daughter Paula; these shapeless and relaxed sessions exude a balmy sort of charm and the friends obviously enjoy playing together. The records seem a little quiet to me, but the microphone has managed to pick up some of the friendly atmosphere of the live venue in Malaga, which adds to the ambience.
Email: [email protected]

Sandra Ross sent her Seks Kompositioner CDR (NO LABEL) packaged in a nifty home-made foldover cover. This Danish sound-artist is still at school in the Royal Academy at Copenhagen and perceives herself to be working in the acousmatic and electro-acoustic traditions. Some decent creaky wooden-slat effects mingle with processed electronic fragments and deep-throbbisome drones in semi-random ways, but the work on this 20-minute release feels tentative and unfinished, barely composed at all. You may want to sample the free download on her site before you order a hard copy of this.

Jonas Kocher is the Swiss accordion player last noticed here about a year ago with his Materials solo release. Solo (INSUBORDINATIONS INSUBDCD 03) showcases him doing it in a live environment. We’re told that “contrasts” is the keyword here, and Kocher does indeed cover all the bases from extremely high to extremely low notes in the course of this 35-minute piece, causing his instrument either to growl like a grumpy musical bear with a bad cough or squeal like a bemused pipistrel with a bottle of Aqua Regia in reach of his tiny claws. Kocher continues to perform his squeezing actions quite slowly and deliberately, with lots of quiet passages where nothing much appears to be happening at all. While I appreciate this is part of the restraint and discipline of his chosen minimal path, the performance feels stiff and wooden to me. He’ll have the last laugh though, if he gets invited to join Phosphor in Berlin.

17 May: Kayaka‘s One Man’s Hands (PIGHOLE MUSIC PHO21) is another home-made release, sent direct by Kaya Kamijo in North London who also appended a hand-written note and track list. 15 cuts of rough electronic music, mostly built around crazy mutations and filterings of programmed beats with random synth doodles thrown into the spinning candy-floss wheels, all recorded direct onto cassette tapes. Not essential music, but it is quite experimental in certain interesting ways; I sense the creator is onto something with this very free-wheeling approach. It feels quite hands-on and has a primitive vibe which appeals. I see our noisy friend Horacio Pollard has some connections to the label, and it looks like most of the catalogue is available for download too.

16 May: oddity of the month for May comes from Arvo Zylo in Chicago. His 333 (NO LABEL) release is a quite overwhelming mix of chaotic elements, where manic organ riffs and repeated loops are pitched against large gusts of disquieting and alien noise blocks. For all of these three long tracks, there is a constant air of alarm, as though things are going to get wildly out of control and potentially dangerous at any second. Patterns do emerge from the apparent chaos and fug, but this is definitely one teeth-clenching roller-coaster ride where you need to strap yourself firmly into your armchair before clicking the play button. The collaged cover artworks are printed in garish, acid colours and their imagery tends to mimic the mayhem of the music, particularly the pink dayglo chickens running over what looks like an endless field of scrap metal. “Alcohol-soaked, dark and solitary” is how the creator describes the making of this intense and strange album of circuit-bending and warped hip-hop approaches.