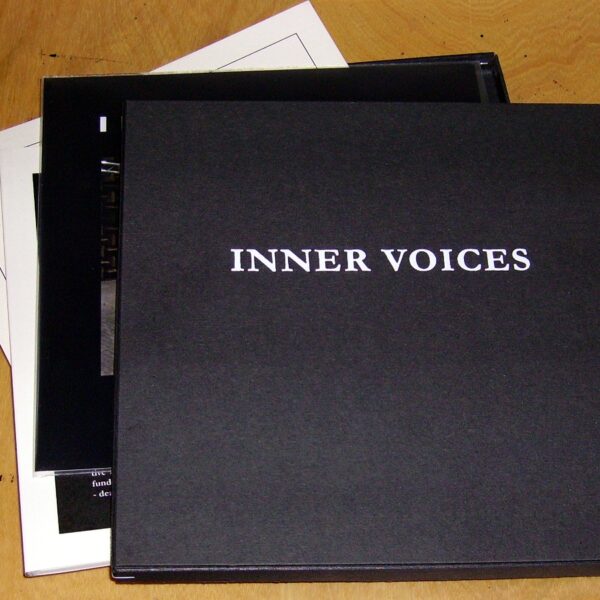 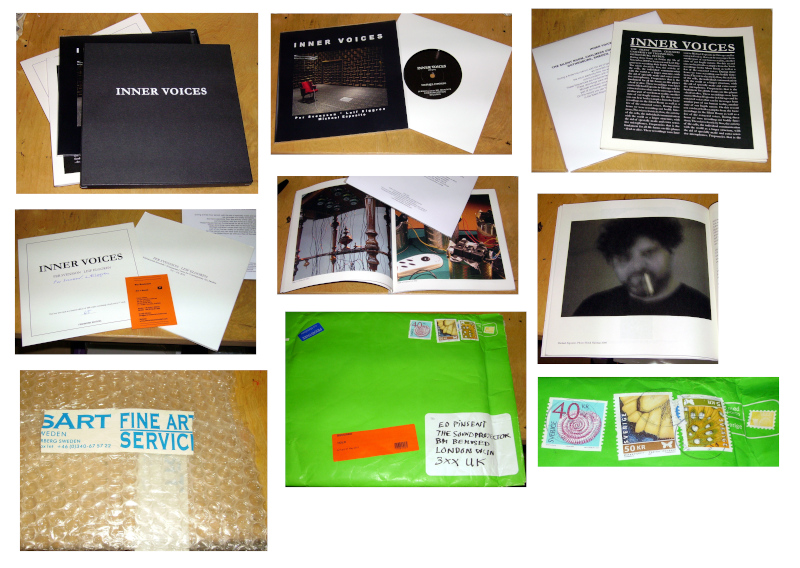 Inner Voices (FIREWORK EDITION RECORDS FER 1085) is another limited-edition art-object release from Per Svensson in Sweden. As you recall he was kind enough to send us his Intergalactic Box in 2008. Whereas that work was quite a memorable example of his more outgoing performances and installations, suggestive of his enthused communion with all sorts of exciting cosmic parties taking place across the universe, this one is as title indicates a much more inturned and introspective work. He worked with Leif Elggren and the two artists sealed themselves in “The Silent Room” at the Chalmers University in Gothenburg, there to make specialist recordings of the internal workings of their bodies. The assumption is that “all life forms…dead or alive” have certain common frequencies, characterised by Per and Leif as electricity flows and cell activity. We’re in a crossover realm of science, body art and sonic venture which is outwith my mental span, and it’s no wonder they needed highly sensitive microphones to detect and record these events so small, they can hardly be said to have taken place.

Resultant recordings from this intensive three-hour workout were sent off to the American researcher Michael Esposito. Chicago-based Esposito is both an artist and one of the world’s foremost researchers into EVP, or electronic voice phenomena, and he’s a singular fellow who can trace ancestral links back to the partner of Samuel Morse and to Thomas Edison. Matter of fact I seem to recall that the idea of finding dead voices recorded on tape can also be traced back to Edison. Needless to say it’s the name of another Swede, that of Friedrich Jürgenson, who has become frequently associated with this area of speculative research 1. Esposito conducts his work as part of “Phantom Airwaves” and has released not a few records and films that relate to the theme.

Esposito’s job in this case was to mine the recordings of Per and Leif’s bodies, and extract any voices he might find. What he did find ends up on B side of the 33RPM seven-inch record, while the A side is the original source material from the two miked-up Swedes. Amazingly, it seems he did succeed in locating something unexpected – but I won’t spoil the surprise, in hopes that you will seek out a copy for yourself. The A side is mostly a set of rather quiet grey drones, and as a listening experience this record may tend to be rather a minimal affair, but a different sort of minimalism to that (say) released by Winds Measure Recordings, which I have been thinking about for the last ten minutes ever since that idea about “cell activity”; it reminds me of the Cell Memory release, although it has to be said Ben Owen’s label, while extremely metaphysical in nature, has never delved explicitly into the matter of psychic research.

The release is packed in a fine box with lots of related images from art exhibits, past and present, inside a full-colour booklet which also has explanatory notes printed in English and Swedish. I found Leif’s Table Of Death, with its speakers adhering to the underside of a highly-polished and oppressive piece of antique furniture, particularly affecting. The image of the silent room itself, with its rather disquieting red chair, is to me just one step away from this famous print by Andy Warhol from his “Death and Disaster” series. An exhibition by this title took place at the Kristianstad Centre for Contemporary Art earlier this year.