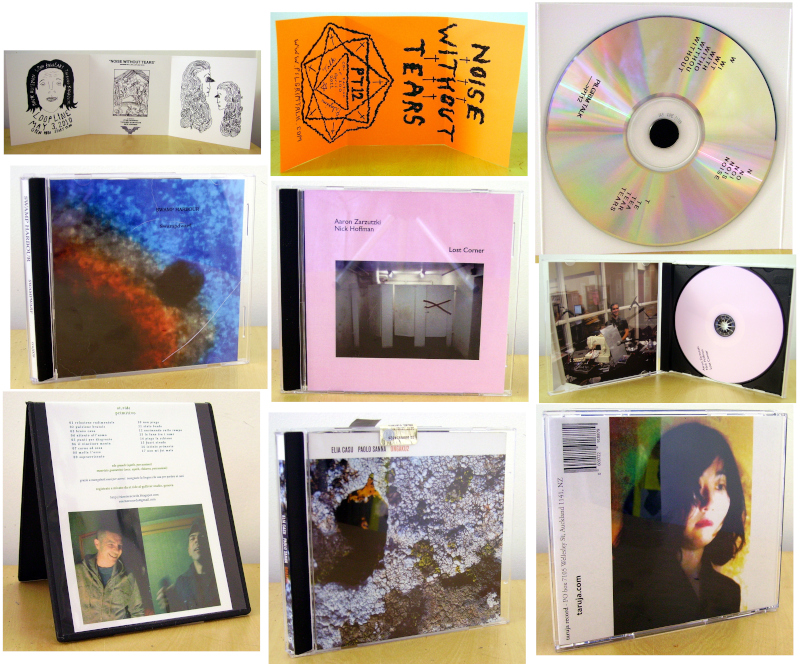 Enigma of the day is Noise Without Tears (PILGRIM TALK PT12), a recording of extremely minimal dimensions recorded at Loop Line in Tokyo. Japanese players Utah Kawasaki and Takahiro Kawaguchi joined up with American Nick Hoffman for this 2010 event. What ends up on the recording is mostly not much more than an ambient room recording, with occasional crackle from an amplifier, some background voices, and other uneventful events. The party livens up for the second half of the first track, where the trio manage to create a bewildering and slightly chaotic sprawl of tiny electronic noises and hums, much like generators and small electrical household gadgets going wrong. We have heard similar recordings made at Loop Line from a few years ago on the Presquile Records label, but different creators were involved, and just as I thought I was getting a handle on the mysterious movements behind these sub-atomic antics, along comes this puzzling release to add further leaves of invisible papyrus to the archaeological mystery. The original issue came with a see-through lathe cut record which I think has now sold out. The CD artworks (drawings somewhat reminiscent of Denis Tyfus), and the title might of course lead you to expect something quite different from this record, but one prevalent image I find is a scrawled pentagram and the title is a reference to Aleister Crowley’s Magick Without Tears; this and the image of the long-haired creatures with bulging cones for eyes suggest the intention here is ceremonial, trance-like, mesmerising.

Another strange one from Nick Hoffman is Lost Corner (ILSE 4) where he collaborates with Aaron Zarzutzki for a piece which was performed live on the air for a Chicago radio station in 2010. Be prepared for one hour of baffling sound art, full of percussive scrapes and bumps, where the “what is it” factor never lets up for a moment as we wander around a virtual warehouse of objects and events – as though two cargo handlers from the docks of New York were let loose inside the brains of Max Ernst and Rene Magritte, and started shifting around their respective catalogues of images as though they were shipping containers and wooden crates. The photo inside the release gives us a clue as to the activities: arranged on a circular table in the studio is a sewing machine, a crumpled piece of tinfoil, a thin sheet of metal and perhaps a chrome tyre hubcap (or a glass ashtray). These accoutrements are surrounded by effects pedals, portable mixing desk and microphones. Behind this table sits a grinning young man. In short this is close-miked “object-soundart”, which has virtually nothing to do with music creation, and is a strain of sub-culture which we have seen associated with the work of Jeph Jerman, and to a certain extent with the improvisers on the obscure CDR label TwoThousandAnd (run in the UK by Anthony Guerra and Michael Rodgers). Not exactly a “thrilling” release, this sonic jumble nonetheless has its own discreet charms, and puts the above record in a certain context where it makes a bit more sense. Released on Travis Johnson’s ILSE label.

I’m sure I received a whole bundle of CDs from Elia Casu, the Italian guitar player, but they are probably buried in another shopping bag and I can’t lay hands on them. For now, we’ll make do with Ongaku2 (TICONZERO TCZ009-1), a duo work he recorded in the studio with the drummer Paolo Sanna in 2008. Largely a guitar and percussion record, with occasional additions from zither, waterphone, and scraped objects, the album presents a strange mix of wayward avant-rock soloing, dissonant tones, emptied-out meander-scapes, desolate vistas delineated by a few scraps of percussion and guitar echo, and generally perplexing art-noise and abstracted instrumentals. If you’re a fan of the Fred Frith-Chris Cutler duos from the 1980s and 1990s, this will appeal to you; it’s much more about experimental free noise creation than following any of the precepts or etiquette of improvised music. I get the feeling all 11 tracks come from a single recording session and have been chopped into convenient slabs for our enjoyment, sometimes repeating certain sections to restate underlying themes, but it’s mostly a long voyage of exploration through the cranial channels of these questing Italians. Be sure to check back when I find the other albums from this Casu fellow and his “axe”.

Also from Italy we’ve got another growly groover from st.ride, whose Cercando Niente we heard and enjoyed in late 2010. On Primitivo (NIENTE RECORDS VOLUME 7) the duo of Edo Grandi and Maurizio Gusmerini once again blast forth with a disjointed collection of ugly urban anti-songs made with synth, percussion, guitar and a yelping voice full of brutal passion, perhaps bewailing the cramped circumstances induced by current economic squalor and other psychological restrictions that characterise modern man’s dilemma. 17 songs mostly around 2 minutes in length (gotta love that economy, that directness), each one a variant on the alienated howl of pain and refusing to follow any conventional rules of song construction, resulting in brilliantly ill-fitting and broken sensations as the tunes lope back and forth like wounded monsters cross-bred with hand-made robots fashioned out of birdcages, gear systems and old cartwheels. Every instrument burps out vile non-musical noises as though constipated – the synth has indigestion, the guitar has a splitting headache, and even the singer’s tongue has swollen up like a sponge. This is music whose very reason for existence is to express inexpressiveness and blocked emotions; facing the predicament where the very language of music is inadequate to express the conflicting and seething emotions that bubble in these Italians’ mental cauldrons. If you’re a fan of English post-punk music from the early 1980s with its “angular guitars” and other attempts at flirting with disfunctionality, this record will deliver if you want something even more raw and basic than that. It’s the real deal!

More “barely works” music from Swampdwarf, whose Swamp Harbour (TARUJA TRUJ009) is a CDR sent to us in June this year. This New Zealand combo have been playing for about six years and certainly embrace the DIY and lo-fi aesthetics with a passion as they trade their respective instruments (fuzz guitar, fuzz organ, fuzz drums) back and forth. Right away the sound of the record hits home – that clammy, moist, atmospheric heat-haze that typifies so much music from this country. I suppose they are closer to conventional rock than st.ride above, but their simplistic drum patterns and trance-inducing jam sessions never fall into the trap of turning into structured songs with repeated sections and middle eights. Instead, they just let rip and play – wallowing in the glories of distortion and amplification, and simply enjoying the business of abundant noise production like children playing with powder paints, wisely keeping each song around the 3-4 minute length rather than inflicting 30-minute guitar solo epics on the listener. Lively, messy, fun, and much more rewarding than some of the swampy and pretentious slow drone music that sometimes emanates from this part of the world.