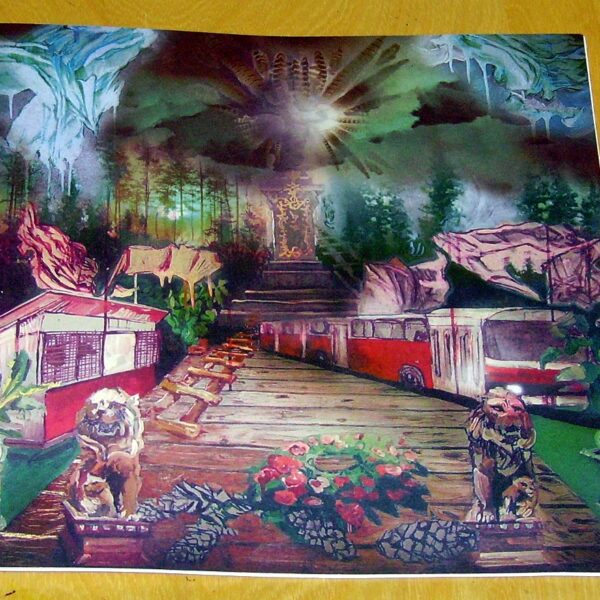 Easterndaze (AUDIOTONG NO NUMBER) is a useful compilation of music from the “Eastern European Sonic Underground” from 2010, an area of music which represents quite a gap in my knowledge, in spite of Zeromoon’s excellent efforts to expose a lot of music from that region. Countries represented include Hungary, Poland, Romania, Slovakia, Serbia and the Czech Republic, and stylistically the survey pulls every which way – percussion music, beats and electropop, stripped-down guitar instrumentals, weird chants, bizarre atmospheric episodes…full list of names and projects represented here can be seen in attached photograph. They are all very good and despite some concessions to what I suppose to be commercial Western contemporary dance music, everything here has a strong identity whose distinctive flavour I cannot quite place. There is a stern and unblinking character to the music which appeals mightily, perhaps indicating something of the stoic forbearance of those who dwell in these lands, not that they’re incapable of entertaining us (in a very eccentric way) with these musical experiments. Only a couple of tracks near the end of the comp disappoint by coming close to faceless ambient dronement, but the remainder is highly pulse-worthy and individualistic in the odd turns of mind it represents (e.g. a title like ‘The Misfortunate Mr. Terp’). The deal here seems to be that it’s not actually for sale and if you want to get a CD in a printed cover you need only pay costs of postage to Audiotong, who offer all the music for free download in a wide variety of supported formats. Meanwhile if you want to enjoy a taste of more music in similar vein, spin your hobnailed boots to Easterndaze and fill them with digital murk while ye may.

Denis Kolokol is Proud To Be Loud (MATHKA NO NUMBER) on this, his debut CD, but he’s not a heavy metal guitarist or table-noise denizen. Instead this Ukrainian sound artist is a programmer and coding expert coming to music from the world of IT, whence he admits a deficiency in how he responds to music – he’s always sought to analyse its structures, rather than respond to it emotionally. On the four tracks here, he spends two of them applying his analytical ideas to the guitar playing of Alexander Chikmakov, adding his own electronic interpolations to the fractured constructions; and there’s the 20-minute title track, a multi-channel installation artwork in the electroacoustic mode and using the voice of Carmina Escobar. The enclosed sleeve notes take the form of an interview with Kolokol, whose approach to composition is influenced by mathematics and chaos theory; he would probably consider himself to be more of an “organiser” than a composer. Only the Chikmakov cuts appeal to me, because there’s some real musical meat going down under the conceptual layers of process; the multi-channel piece is accomplished, but seems very staid and even quite conventional in its approach, in spite of Kolokol’s challenging notions. Even so, there’s a clarity and transparency to his methods that is quite plain to read for all who hear and wish to decode them, which is a refreshing approach. Boguslaw Bachorczyk’s cover art might be intended to reference the first Led Zep album.

The Italian composer Alessandro Bosetti is constantly full of surprises for me. I have never quite fully understood the earlier works I heard from him on Bowindo, Absinth, GROB and Potlatch, but I also savour that feeling of mental bafflement, of information not quite within my grasp. On Royals (MONOTYPE RECORDS MONO034) we hear three lengthy compositions based around texts, read out and performed by a quartet of actor-singers on ‘Gloriously Repeating’, while the composer adds idiosyncratic musical backdrops using stringed instruments, piano, electronics, field recordings, and more. Frankly I have never heard anything quite like it – the compositional form seems to be aping the natural rhythms of human speech and deriving most of its patterns and structure from the way the texts are spoken, but that doesn’t begin to account for the eccentric and exciting twists and turns of the composer’s jumbled layers of percussion, inexplicable dangling notes, and unexpected intervals. True, overall it does have a slightly effete “preciousness” about it, especially in some of the delivery of the spoken material, but this sense soon evaporates as the piece progresses. I think ‘Gloriously Repeating’ is a fragmented masterpiece of tricky layered thought processes, cast into music. It’s like a very precisely co-ordinated descent into lunacy, proceeding at the gentle pace of a horse-drawn cart on bicycle wheels. If you could imagine an inverted form of Third Stream chamber jazz combined with the texts of a more upbeat version of Samuel Beckket, that might come close. You might prefer ‘Life Expectations’, which is slightly easier to groove to and a piece where Bosetti does all the voices himself; this cut is like a Weather Report CD skipping badly while a mad European tea-party is setting up a salon in the next room. Orchestrated madness at its finest!