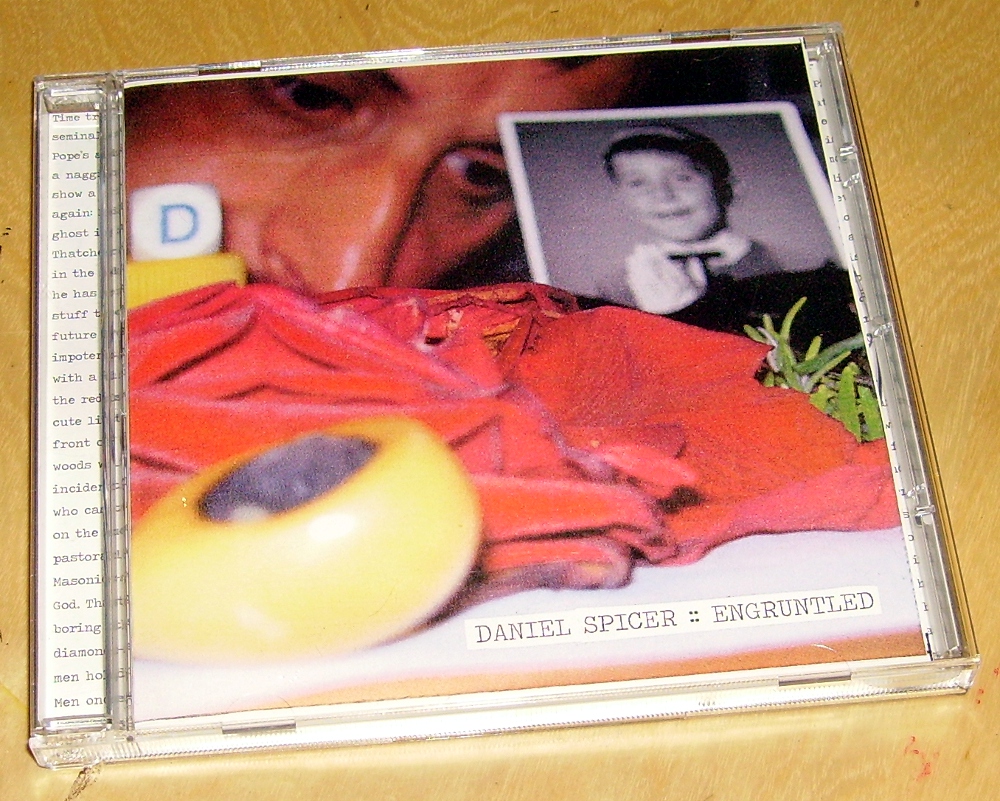 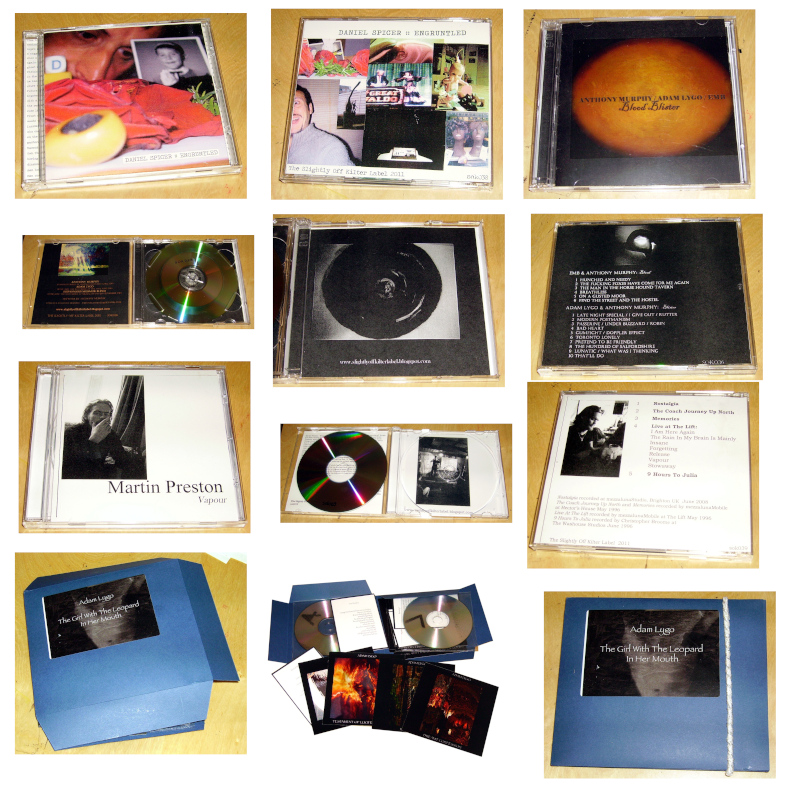 From June this year, we find the Brighton-based label Slightly Off Kilter releasing these poetry records. All four of these poetry releases are distinctive and truly experimental items, evidence of vital and exciting talents at work; and I should have written this post sooner as two of them are already sold out by now. The mighty Adam Lygo, creator of numerous releases of surreal and apocalyptic guitar noise, unleashes the bats from his spoken-word muse on The Girl With The Leopard in Her Mouth. Open this lavish hand-made package to get to two full-length CDRs of eerie mumblings and murmurings whispered into an echo chamber to the accompaniment of wispy and wraith-like drone music, the lyrical content littered with images of dreams, mirrors, light, and broken pictures of stark alienation and loneliness. The actual verbal content is largely obscured by these processes, yet the emotion and meaning shine through unmistakeably. These compelling and relentless streams of information summon up the requisite dream-state in short order. Recommended listening to all wide-eyed insomniacs and fans of Bill Nelson records who want to take their personal dream-quest to a higher level! Notice…all texts are supplied on little folded inserts and there are numerous artwork panels to further induce hallucinatory states. Line by line, pulse by pulse, Lygo is becoming the embodiment of the French poets in the film Orphée.

On Engruntled (SOK038), Daniel Spicer recites six separate poems over a single 34 minute track, often overdubbing himself, and adds some low-key non-determinate noises as backdrops to his voice. Many techniques: punning with synonyms and Joycean jumblings, passages in Latin, basic and earthy “pastoral” imagery, many lapses into Anglo-Saxon cursing, with each unlikely tale enhanced with numerous grotesque and startling images. Spicer is also capable of a non-verbal moaning noise, not unlike the improviser Phil Minton, and adds even more unsettling layers to his bizarre tirades thereby. Plenty of eccentric and black humour to savour too. I’d have liked the CD to be slightly louder and better recorded, but there’s real potential here for Spicer to one day make a spoken-word set as distinctive and unforgettable as The Post-Nearly Man. At his best, he seems to come close to creating private incantations of rough magick. Numerous local talents involved in various capacities on this release, including label boss Paul Morgan, the drone-guitarist Hobo Sonn, and Jason Ward, who adds xylophone and flute. A true oddity!

I sense Paul Morgan has a talent for seeking out and nurturing truly visionary personalities who have been overlooked and remain invisible to most of society. Such a description might fit Martin Preston, who performs numerous poems on Vapour (SOK039) in the space of 24 intense minutes, many of the pieces recorded live at small venues in front of an audience. Certainly the most “artless” of the records on the table today, this is a radical, electrifying document of a unique outsider voice. The centrepiece is ‘Live at the Lift’, nine minutes of ranting on which this uncompromising figure unburdens his soul through seven short vignettes, each one a clear-eyed vision of street life delivered with an unblinking stare; between these tales, and the good-natured but abrasive way he jostles and insults the audience, it becomes clear that Preston is a man who has seen too much of the cruel injustices that beset us all. And he’s suffered his own personal setbacks, dyslexia and Huntingdon’s disease among them. On these live cuts, Preston will wrench you out of your comfort zone in seconds with his strident and insistent voice; some listeners might prefer the more ambiguous cuts ‘Nostalgia’ and ‘9 Hours to Julia’ which at least temper some of the anger with musical backdrops, but the latter is a punky-reggae episode of strident chaos that John Cooper Clarke ought to applaud, and the former (with doomy music by Morgan) is simply a waking nightmare. Small press editions of this man’s poems, and a novel, exist; but you’ll want to initiate yourself with this release, 24 minutes of some of the most painful honesty and rawness committed to disk.

Poetry and jet-black gothic darkness combine on Blood Blister (SOK036), a project where the poems of Anthony Murphy are enhanced with the music of Euphonious Murmur Blend on a short three-inch disc, and by Adam Lygo on the longer full-length CD. Murphy’s poetry is quite different to all of the above; not especially confrontational, but his voice sounds resigned to the wearisome futilities of everyday existence, whose tedia the author details with minute attention to detail bordering on the maniacal. There is a matter-of-fact clarity to his words, and his delivery, that makes a nice contrast to the Lygo disc for example, where the strategy has been to obscure as much content as possible. It should take about just ten minutes of experiencing the dour and rain-sodden delivery of Murphy before you’ll be sucked bodily into his age-worn and care-lined world, and soon every tree will appear gnarled, all books worm-eaten, every apple in the bowl rotting away. As to the musical content, Lygo’s contributions are abstract but listenable electronic noise charged up with plenty of echo chamber. Euphonious Murmur Blend by contrast produces long tracts of nerve-shredding electronic synth and guitar noise, not especially high in volume but certainly designed to induce tension and hate. This tactic brings out the bitter and vengeful side of Murphy, whose poems for this disc are bilious stories of frustration and denial, just dripping with sarcasm, barbed sentiment, and an undercurrent of sheer menace. His every word carries a frown.