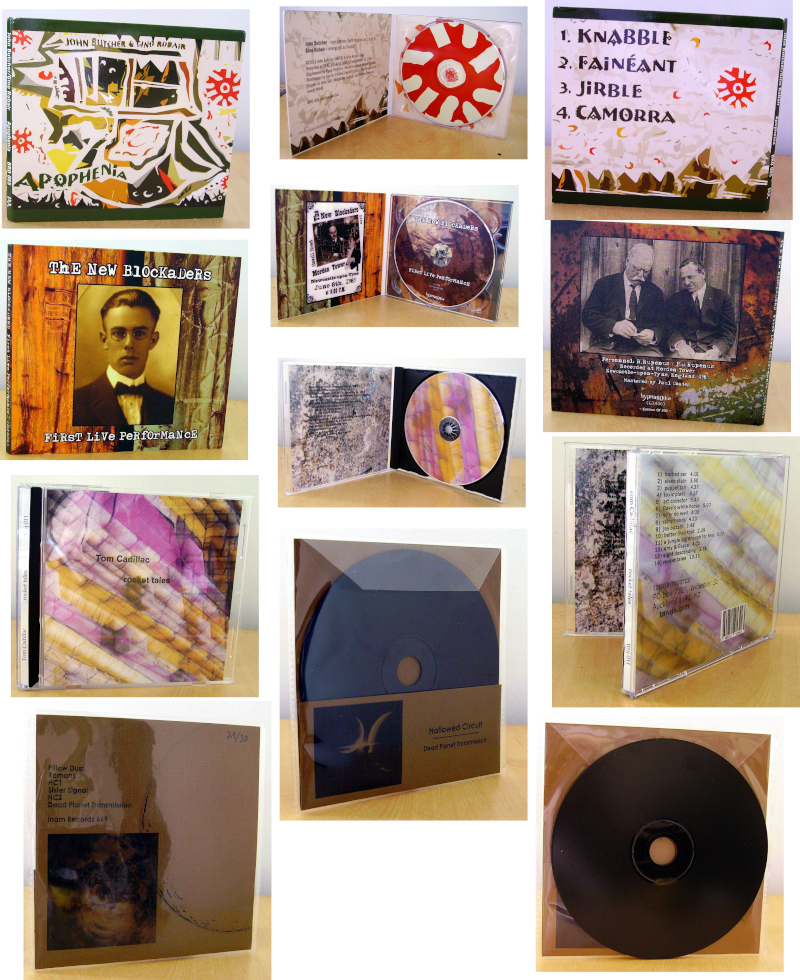 John Butcher and Gino Robair combine personalities and styles to abrasive effect on Apophenia (RASTASCAN BRD 065), the former with his saxophones, sometimes playing them in “motorised” mode, and the latter with his “energised surfaces”. Know what you mean, Gino…my surfaces are already getting energised just by coming into tactile contact with these non-specific, process-based rotary abstractions. I certainly enjoy the lite-industrial creakery of ‘Knabble’, although you may prefer ‘Fainéant’ which, among its nine minutes of duration, has some moments recognisable as a parping saxophone, hooting freely like a circular-breathing owl, and a snare drum or equivalent item being scraped like an unfortunate ox paying a visit to the tanner which didn’t quite work out in line with the expectations of that bovine. ‘Camorra’ is another superb swipe of ringing and resonating clatterability, where inanimate objects have their hidden voices revealed by the patient caressing of Gino’s sensuous massage, but the real tour de force is ‘Jirble’, nine minutes of steady and ingenious improvising whose core body mutates from a mysterious murmuring mixed-drone cloud into a palpable wail of near-animalistic howls. Imagine slow-motion cement monkeys pushing in vain against the bars of their cages, steel bars that ring and vibrate in an endless corridor. Aye, this deep music can come across as a stern and challenging listen, while the cover art, colourful blobs splurged out from the autopen of Dennis Palmer, reminds me of the sort of humpy-jumpy free playing jazz LP that John Zorn, Fred Frith or Bill Laswell might have released around 1988. Arrived here June 2011.

The First Live Performance (HYPNAGOGIA GIA06) of avant-noise industrial supremos The New Blockaders took place in June 1983 in Morden Tower in Newcastle. Here it is again on CD, with a wealth of splendid artworks printed in full colour, as usual displaying old photographs from the 1920s or 1930s in a highly ironic way. Inside the front flap is an image which I take to be a facsimile of the original poster for the event, juxtaposing men in tuxedos and ties with some old-fashioned machinery that might be a lathe, a sewing machine or some brass plumbing. At this early-ish stage of their development, R. Rupenus and P.D. Rupenus concentrated on creating an unpleasant churning din, much like rocks rattling inside the blades of an old-fashioned lawn mower which you had to push across the ground. I call it the “broken rubble” sound, as opposed to the later “roaring dynamite blast” phase of TNB. Apart from the complete lack of musical dynamic of any sort, the abiding effect here is one of disjunctive, purposeless, neutered energy, a compacted metaphor for the dysfunctional organisational state of any modern agency – be it government, business, academia, or most especially the arts. This is not the first reissue of this music, so prepare (once again) for claustrophobic, nihilistic Hell.

Another CDR from Taruja Records in Auckland. On Rocket Tales (TRUJ 011), Tom Cadillac provides his own eccentric and unbalanced take on the minimal electronica genre, with his wonky analogue synths and slightly dubby drum machine rhythms. His producer George Andrews contributed some help with the drum programming, and there are occasional guest musicians such as the violinist Vicki Johnson, but this is a Cadillac solo studio production. With its rough edges and rather charmingly “odd” keyboard sounds, this is unlikely to be mistaken for a slick piece of imitation Kosmische or a clinical drop-forged Mille Plateaux production from the icy studios of Cologne, and each short instrumental track hobbles along the squelchy pathway in a fairly compelling way – at times like a slightly punkier version of Ptôse, with more warmth and wheeziness in the sounds. He works best when he keeps the “riffs” simple – two or three notes at most. Attempts at “soloing” or stabbing out a slightly more sophisticated melody with his fingers find the player getting unstuck. The only other drawback is the limited sonic range of the album, and the fact that all tunes seem to be in the same key, but these factors may assist with any mesmerising benefits you may hope to derive as a listener. Arrived here in July 2011.

From Ryan Huber’s microlabel in Indiana, we have Hallowed Circuit with Dead Planet Transmission (INAM RECORDS 669). Five examples of variations on sustained noisy-drones, which largely stay in one place and create interesting textures through subtle interventions. ‘HC1’ and ‘HC2’ are subdued humming whirligigs of whine and radio static, but ‘Pillow Dust’, ‘Remains’ and ‘Sister Signal’ are all strong examples of controlled noise eruptions. They soon become overcharged and overloaded with feedback, loops, crusty layers and general detritus piled on with a generous hand, creating that sense of suffocating excess which is one of the “signature” marks of the music on this label. I haven’t checked, but this may even be Huber himself recording under yet another alias. The title track ends the disc and aims for an “epic” sweep of dramatic mixed-chord science fiction deathscape arena music, sending astronauts spinning into a vast black hole or dooming them to face a horde of alien enemies on a hostile planet. Got this in June 2011 but as mine is numbered 29 of 30 copies, it may well be sold out already.