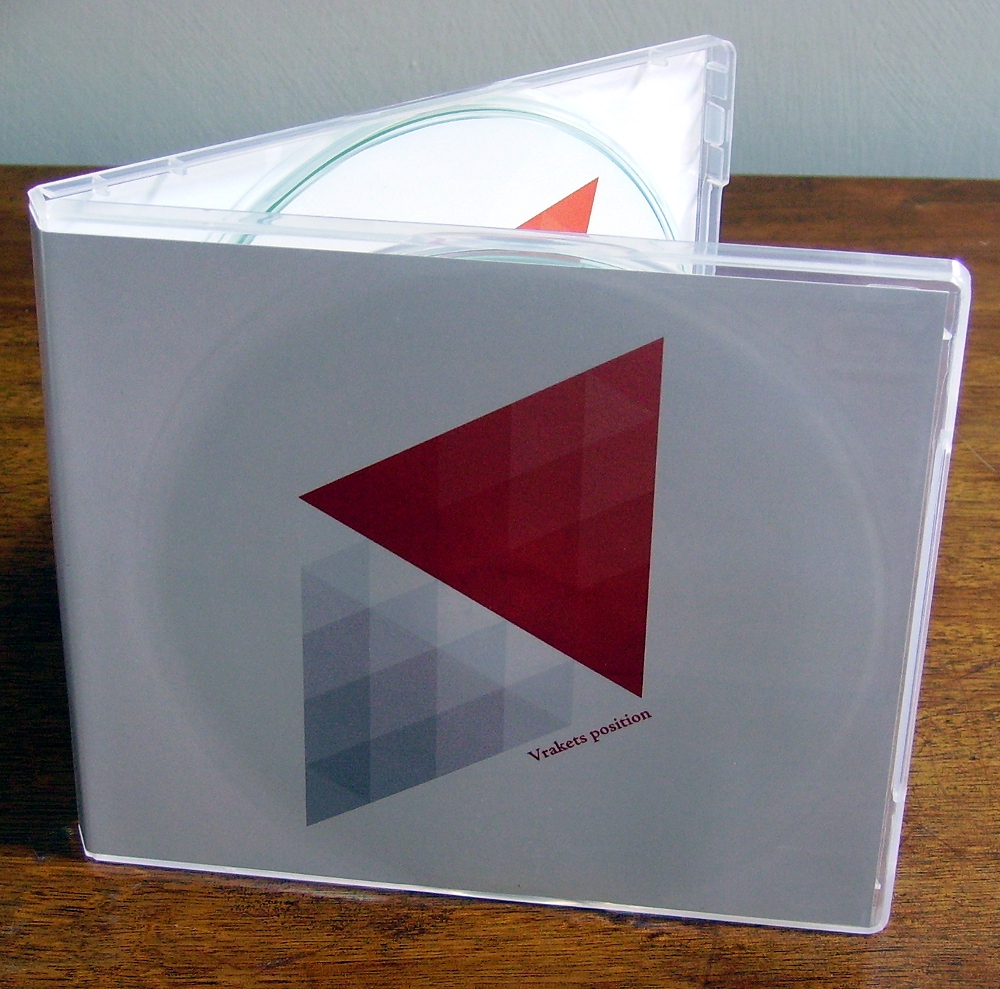 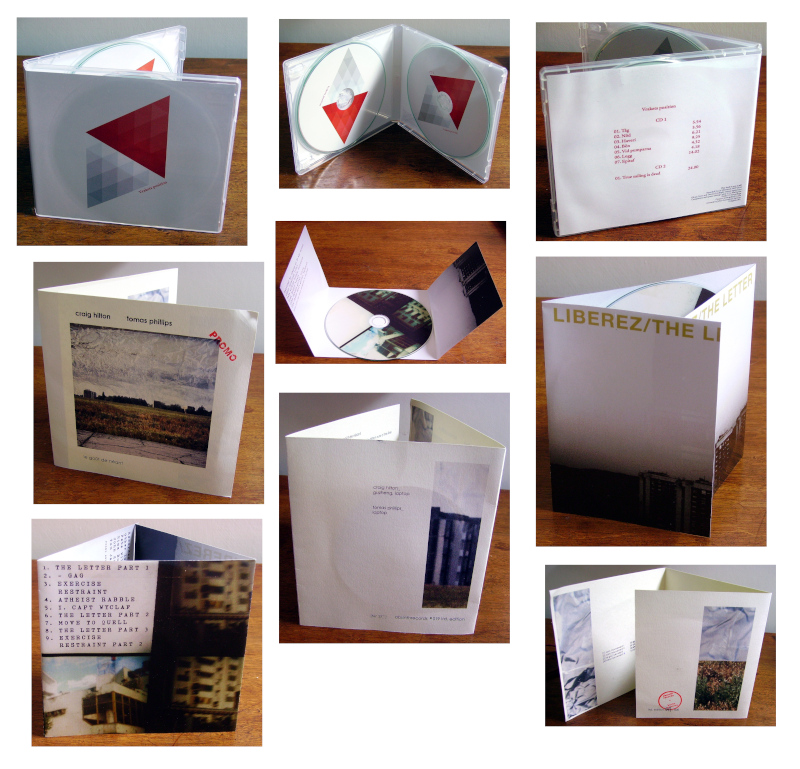 This double-CD by Vrakets Position (VRAKGODS 001) arrived late April 2011. It’s two guys from Sweden who make one heck of a deuced fine 100% improvised din using just guitars and synths, maybe some effects pedals, a rhythm box…veering somewhere along the slopes of avant-rock, free noise and even freer improvisation, the combined simplistic and unfettered musical thumping howl they make is utterly splendid. Göran Green and Tommy Lindholm are old friends who were in a punk band 1978-1982, and after the break-up of that combo continued making music together on cassettes from 1988 onwards. Now it seems they’re both over 60 years old and still find they have a hunger and passion for playing that is undiminished. So along comes this set offering over 70 minutes of music, all drawn from their recent period of creativity which started in 2007 – freaky psychedelic-ish jamming and soaring feedback din, enigmatic atonal songs, near-romantic ballads, and just plain old freeform fuzz out noise. One trademark that distinguishes their mixed-up emotional splurges is a strong sense of rhythm and repetition, and there’s hardly a song among the seven cuts on CD1 that doesn’t massage your brain into a glorious state of tranced-out bonelessness, simply by dint of mindless repeat thumpage. It’s a soft-hard sound that insinuates itself into your body like so much cotton wadding, which then proceeds to swell up when moistened and cause your carcass to turn inside-out. CD2 is slightly less of an all-out zonkermaroo, offering one single 24 minute floor-wiper called ‘True Sailing Is Dead’ (a line from ‘Horse Latitudes’ by The Doors, as any fule kno). This item is more of a wishy-washy synth based wailer that ebbs and flows like a miniature whirlpool and is (for me) marred slightly by the annoying voices at the start, but even so I can see th’ track might turn out to be a beguiling mystery swamper with its numbing repeato-patterns and general air of opacity, something it shares with its sister CD. One of the real nice surprises of the year this, and recommended too. Allegedly, the boys from Northern Skåne have hundreds of cassettes dating back to 1978, so keep an eye open for more releases from those carrier-bags of buried treasure. By the way their name translates (roughly) as “Position of the Wreck” in English, and after playing the first disc, you’ll understand exactly what it means.

Here’s a gem I’ve left festering at the bottom of the box for too long, the LP The Letter (ALTER ALT05) by Liberez released in May 2011. This English avant-rock combo were formed by the recording engineer John Hannon and the drummer Pete Wilkins, both former members of Woe. The group was soon rounded out by the addition of guitarist and keyboard player Tom James Scott, who’s had a couple of releases on Bo’Weavil. Their secret weapon is the vocalist Nina Bosnic, whose highly unorthodox role in the band is to pour her ominous spoken-word texts in the microphone, producing recordings which are themselves looped, repeated, and heavily processed in the studio workflow. Indeed it seems that it was one of her texts, a private diary-like recounting of an incident from her home country, that sparked the catalyst causing Liberez to cease tinkering with lo-fi home recordings and start to gain an identity of its own. Once you hear Bosnic’s looped sprechtsing (especially on the title track, split into three separate parts) you’ll quickly discern the overlap into avant-garde sound poetry and Steve Reich tape loops; and the whole band are studio-wise experimenting noiseniks almost on a par with This Heat or The Pop Group. In fact the whole Liberez mission statement involves intelligent notions about deconstructing traditional apprehensions about band dynamics, and moving widely and freely into areas of wild experimentation and music production, freely admitting influences from avant-garde composition in a meaningful way (instead of simply namechecking every European composer who’s ever had a release on the Philips silver series or spliced a tape within spitting distance of Pierre Schaeffer). All I know is, I loved their claustrophobic and catastrophic bass-heavy sound within ten seconds of hearing it, and the LP lives up to its title, performing like a dispatch of urgent news from a strife-torn corner of the contemporary world. Highly recommended listening!

Now for some richly disquieting “art music” on the great German label Absinth Records from Tomas Phillips, joining up with guzheng player Craig Hilton on Le Goût De Néant (ABSINTH RECORDS 019). A guzheng is a grotesque Chinese zither-like instrument kitted out with a peculiar number of strings, at least three times more than a normal guitar, and in fact the exact number of strings can change at any given moment, accounting for its controversial status in the stringed instrument world. As for Phillips, he is armed with the ubiquitous laptop and must be held responsible for transforming portions of this music into the many-layered, dreamy, slightly threatening and ambiguous sleepwalker drones we’re dealing with today. So far, everything about this feels wrong. The duo take their inspiration from the 19th-century French Bohemian layabout Baudelaire, a man so brimful of laudanum and opiates that in the end he could only put his trousers on in the morning with the aid of a mechanical derrick, and while three of the cuts here are called ‘Sans Mouvement’ (parts I-III), a highly apt description of the poet’s physical condition for 90% of the time, the centrepiece is the title track which translates as the “taste of nothing”, a sensation which one can only assume was the ultimate goal of Charlie B and all who followed in his decadent footsteps. While the preceding tracks are quite musically droneworthy and resemble supersize cellos brought in on slow-motion speedboats across an ocean of glue, this ‘Goût De Néant’ track is much more disjunctive and event-laden by comparison, passing through unpleasant sickness-states of low rumbling, nerve-shredding jangling effects, heavy mixed chords like twenty cathedral organs, and odd passages of mysterious silence. Great attention to detail here in bringing this 24-minute delirium of unwelcome physiological conditions to fruition. What an unreal record; it’s even more disturbing to hear the guzheng, which we usually consider to be quite a lively instrument plucked at happy events like weddings and drinking parties, being pressed into service as an instrument of ashen-faced doom and jaded world-weariness. I hope that Phillips and Hilton, now known around Europe as “Laughing Boy” and “Smiley Gus” respectively, get together again soon so they can realise a sonic tribute to the poems of Edgar Allen Poe. Now that, I would buy!