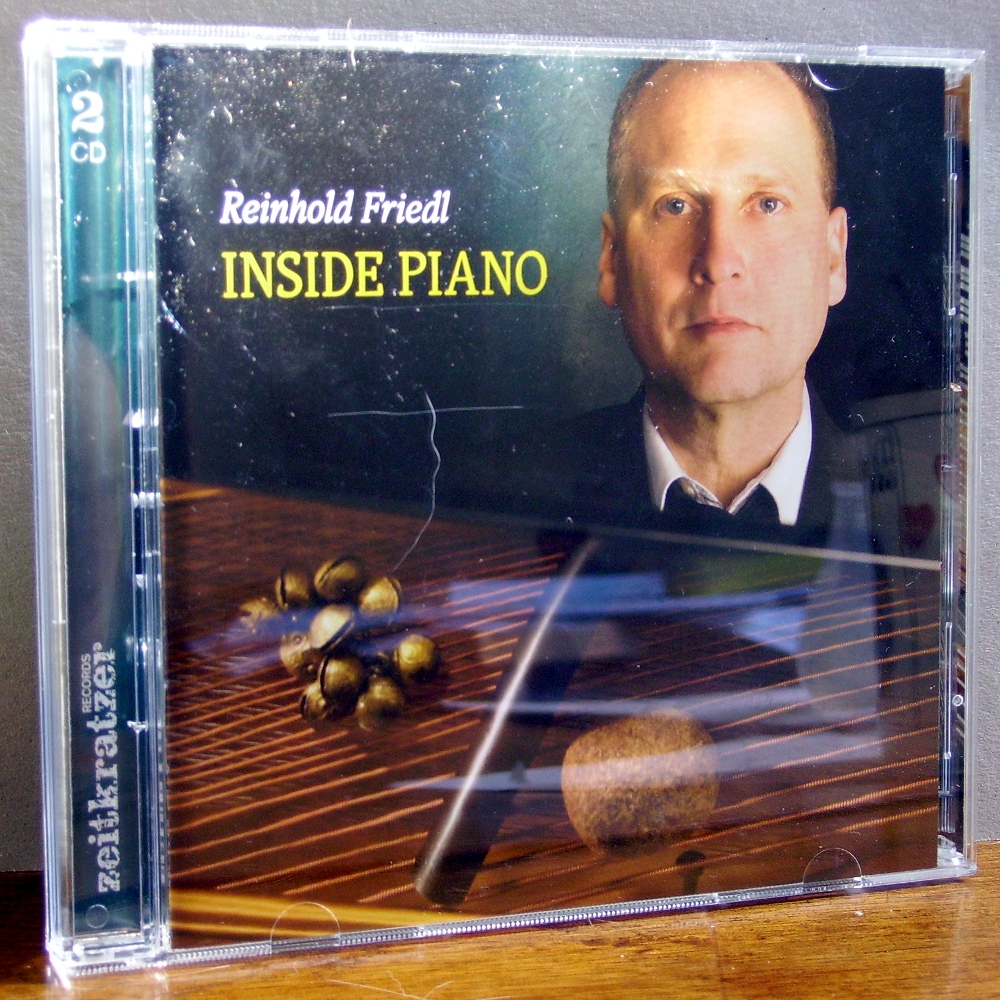 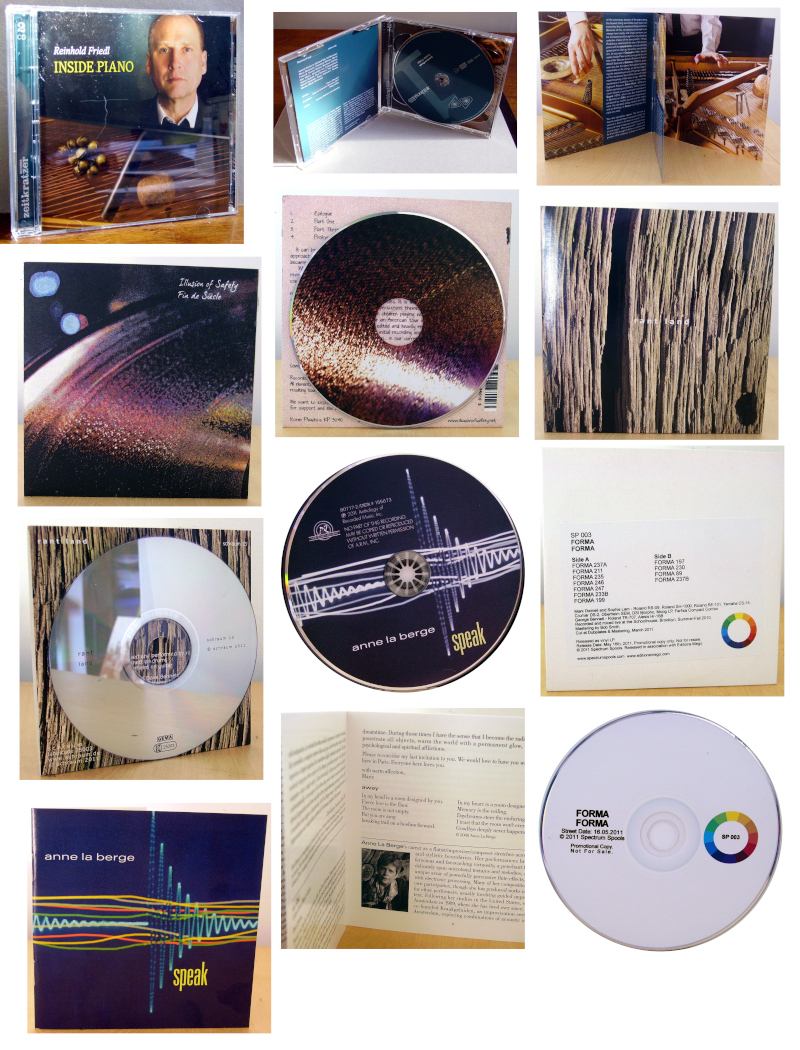 Few have worked as hard as German composer and musician Reinhold Friedl to re-energise and update 20th century avant-garde music, most notably with his exciting Zeitrkratzer ensemble pieces. Here he is doing it solo on Inside Piano (ZEITKRATZER RECORDINGS ZKR 0013), an abundant double-disc set of his own piano compositions using his own robust and lusty approach to the prepared piano, amply illustrated with mouth-watering colour images giving us plenty of close-ups of the action – springs, cymbals, screws, glass tumbler, stone and bells on full display in the exposed interior of his Steinway D-274. The long set includes his 40-minute piece ‘L’Horizon Des Ballons’ on disc one and a number of relatively shorter thrusts on the second disc, but there is enough complex musical information here to keep your academic brow furrowed for months and slake your thirst for dissonant timbres as surely as eight glasses of Rhenish wine spiked with certain juices by a cabal of Stockhausen, Boulez, and the janitor who worked in the Darmstadt building. “The piano is a strange hybrid of a percussion and string instrument”, Friedl begins in his accompanying essay, proceeding with an assured scholarly sweep of the klavier’s history that takes in Liszt, Chopin, Debussy, Hindemith, Rubenstein, Henry Cowell, John Cage, Mario Bertoncini, Franco Evangelisti, and Michael Konig – and that’s just on the first page! Musically, he explores a large range of cutting-edge practices and methodologies to bring forth plaintive singing voices from the wired frame, including the breathy caress of the e-bow, the sadistic scraping and scratching attack, the hideous wail of “noise piano” hammerings, wobbly objects laid on the strings, piping, vibrators…a very full panoply of possible effects are extracted, in what he calls “orchestral music out of the piano”. This also exists as a vinyl collection from Hrönir, a release which contains additional music not on the CD. Simultaneously mesmerising and nerve-jangling music, these electrifying compositions verge on the transgressive and commit amazing acts of sonic violence, yet do so very quietly and unexpectedly.

For Fin De Siècle (KORM PLASTICS KP 3040), Daniel Burke (Illusion of Safety) and Kurt Griesch were invited to revisit their 1995 LP tour release of this name, which had originally been heavily edited for the vinyl format. Now here it is as a 66-minute disc, where the exact nature of their interventions and restorations remain rather unclear (“our straight lines eventually formed perfect circles” is all Kurt can tell us), but it ends with an Epilogue and begins with a Prologue, suggesting the creators have found a way to make their own music perform some sort of reversal of the laws of time. Burke has been known to immerse parts of his musical brain in the darker side of the aural whirlpools that separate a man from his spectral counterpart, but ‘Part One’ is a gentle mysterious drone that includes a little birdsong (or digital facsimile thereof) and is almost pastoral in its small-scaled, sweetly-tempered throbs pulsing in the ground like little seeds in springtime. ‘Part Three’ includes urban field recordings which mutate into a vaguely airless machine-like drone, much like riding an endless elevator to the highest floor of an impossibly high building, where all the other passengers in the car just stand and stare silently from under the brims of their hats. Enigmatic, minimal, compelling.

Fine set of guitar and percussion instrumental music from Rant, which is the team of drummer Merle Bennett and guitarist Torsten Papenheim. At first spin, some of the tracks on Land (SCHRAUM 13) create an impression that we’re in for a set of avant-rock lite-grunge and post-punk angularity, but in fact Rant display a fine precision and deliberation in their crisp work which is extremely engaging – stark shapes, minimalism, mystery, weight. The guitarist never leans on loud amplification, distortion or mindless riffing to fill three minutes of time; instead every note is considered and weighed in his mind before emerging with the clarity of Kenny Burrell’s Gibson as recorded by Rudy Van Gelder. The drummer may appear to be marking time occasionally, but I dig his imaginative approaches to beat-provision (one track uses an old-fashioned typewriter), and he knows exactly when to leave yawning gaps in the continuum for purposes of dynamism and tension. So what may have first appeared as a strain of rock music (as slow and stately as Earth, for example) clearly owes more to cool jazz of the 1950s and (in places) even a little bit of dub-influenced drumming. The only slight drawback is that this mannered approach can become slightly stilted, and you sometimes wish the duo would just pull off their socks and swing a little more. Even so, investigate these compacted miniatures and unpack their statements as best ye may. Recorded in Berlin by Dave Bennett.

Californian flautist Anne La Berge spent some time in Holland as a performer and improviser in the 1990s, until about 2000 she grew more interested in using electronics, computers and texts to realise her own compositions. Some of these recent text-based works are showcased on Speak (NEW WORLD RECORDS 80717-2), including my personal favourite the 25-minute ‘Drive’ which starts with the strange story of a woman in Alabama who invented the windscreen wiper (emerging in the form of an imaginary interview invented by La Berge) and ends with a medical lecture about the uterus, read out by two English voices and cut up by computer methods. Their voices, that is, not the uterus. In between, gorgeous tracts of flute playing, improvisation and unusual electronic music are laid out like road signs on this episodic, avant-garde electro-acoustic road trip. An eccentric and wonderful work, a bit like Laurie Anderson but with less information and not as confusing. There’s also ‘Brokenheart’ from 2007, where La Berge reads out a medical text with the mannered distance of all good conceptual performers, along with computer-controlled music interacting with the piano of Cor Fuhler and the percussion of Steve Heather. Gently and insistently, she persuades her computer systems to generate gentle and fascinating half-random triggered samples that keep your listening body as buoyant as a cork in the Pacific. ‘ur_DU’ combines some heavy-duty breathy flute playing which verges on the sound of gargling, with a lecture on uranium and radium. ‘Away’ is more of a systems-piece, written for Stephen Altoft and his 19-tone trumpet, and demonstrates the way La Berge’s computer patches approaches the familiar minimalist’s task of carving up microtonal scales in an ordered way. However, I get the impression this imaginative and passionate composer/player is not very much indebted to the New York school, with her drones as generous and inclusive as those of Pauline Oliveros and her humanistic approach to fracturing narratives to reveal deeper truths about mankind, rather than to set up alienating devices. You will warm to this record very quickly and soon yearn to hear more of her work.

Forma (SPECTRUM SPOOLS SP 003) by Forma exists as a vinyl LP, the debut release by three electronicists from Brooklyn – Mark Dwinell, Sophie Lam and drumbox man George Bennett, all playing the finest equipment on offer from the synthesizing houses of Roland, Moog, Yamaha, Oberheim and Alessis. Delicious and highly melodic kosmische-influenced music where not a space is left unfilled with colourful sweeps, mechanical beats and processed sounds. This is the third release on Spectrum Spools, a label run by John Elliott and managed through the Editions Mego imprint. Elliott is a member of Emeralds, another American combo who have earned many namechecks and cross-references to German electronic music of the 1970s; Forma in particular are described here as part of the “NYC minimal synth scene”. An uplifting and entertaining record with its head in the clouds and its feet on the surface of the sun, it oozes warmth and untroubled good vibes.