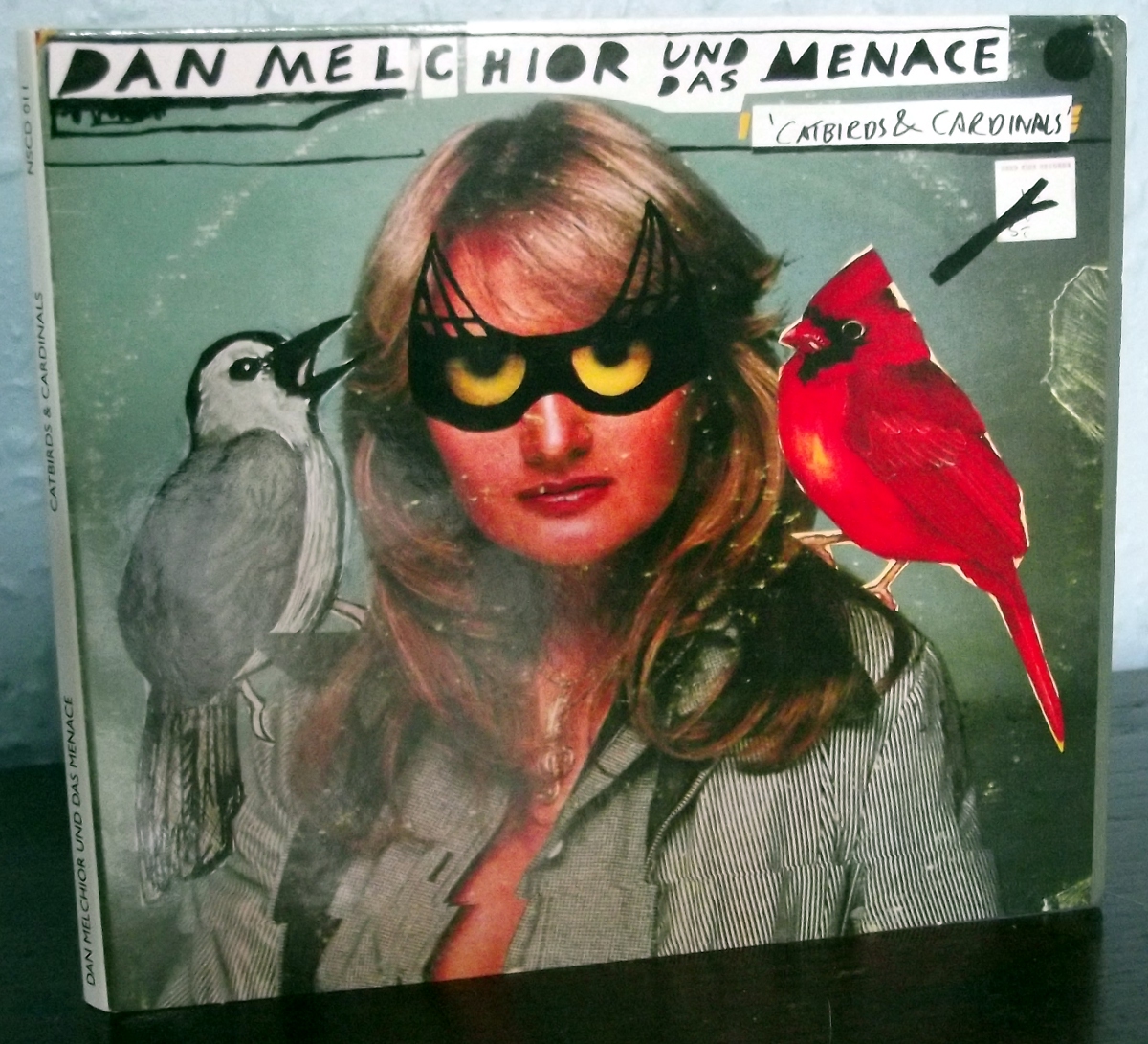 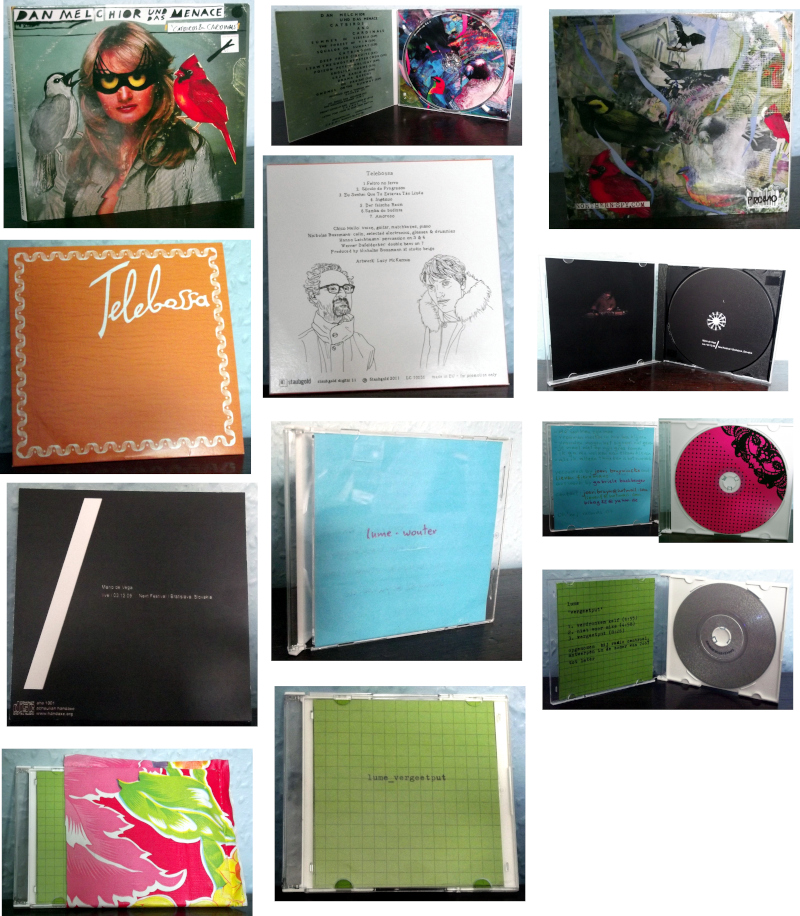 Dan Melchior is an English singer-songwriter based in New York, and his Catbirds and Cardinals (NORTHERN SPY NSCD011) was recorded in North Carolina and is credited to Dan Melchior und Das Menace. It’s a fine piece of idiosyncratic songcraft and raucous music, based around heavy reverbed guitar, simple beat-combo percussion (played quite loudly), and enhanced with eccentric production details – almost at times as if Van Dyke Parks were slumming with Sham 69. Dan throws himself heartily into each song, pouring out his unusual lyrics with conviction and passion and making no attempt to hide the mannerisms of his English accent, while around him the musical backdrops take off like festive skyrockets, at times feeling ramshackle and home-made yet always delivering a thick and solid whomp of sound. A kind of post-rock lo-fi update on the Phil Spector Wall of Sound with elements of primitive rockabilly thrown in. One glance at the cover artworks from his back catalogue also reveal him to be a talented collage artist too, and a good fellow with a winning sense of oddball humour. I’ve no idea if this release is the best place to start investigating, but this warm and life-affirming blast of skewed clattery popsong is highly recommended. I have no hesitation at all in dubbing him the Kevin Ayers of the present day.

Songcraft of another kind from Telebossa, which is the duo of Chico Mello and Nicholas Bussmann, occasionally joined by Hanno Leichtmann and Werner Dafeldecker on Telebossa (STAUBGOLD DIGITAL 11). Mello is a Brazilian-born guitarist and singer who now works in Berlin (where this was recorded) and is also a composer and festival favourite in Europe. Enhanced with minimal percussion, light electronics, and the highly responsive cello work of Bussmann, Chico presents us seven songs sung in his home language and set forth in a very friendly conversational style, creating a rather dreamy, languid atmosphere with his relaxed guitar strums on this quiet album. This modernistic take on samba and bossa nova may not be something you’d want to dance to, and may lack the fire of early Caetano Veloso, but Mello’s unique identity gradually rises to the top of this particular shot of coffee. I just wish there were a bit more espresso and a little less foamy milk.

Another Berlin-based musician is Mario De Vega, originally from Mexico City. Live At Next Festival (ACHEULIAN HANDAXE AHA 1001) is a superb document of him performing at the Next Festival in Slovakia in 2009, armed only with a setup of modified turntables, live electronics, and certain unnamed objects. Just 32 minutes long, but this is a glorious jumble which sits halfway between noise and electronic music, veering from spirited attacks where his turntables spatter and spit out uglified voices from behind the walls of sleep, to surly passages of deep-bass rumbledy-drone noise. An extremely vivid recording which only adds to the sense of moment; it’s clear De Vega is a stand-up man who confronts his demons in the public arena without fear, and doesn’t need any artificial props or sweeteners to leaven his menacing bread of noise. You’d definitely want him in your gang as driver of the getaway car.

Got a couple of unknown oddsters from Lume, who may be the duo of Joevi Bruyninckx and Lieven Fieremans. Wouter (OHNO! RECORDS 07) is a proper pressed CD yet has a hand-made cover lettered in coloured pens, and musically the contents are certain to completely baffle you in just 20 minutes. Six tracks, every one of them different, odd, and totally inscrutable. A minimal percussion piece, a tape-loop glitch item, a recording made in the kitchen, some groany-noise set to a clumsy rock beat, absurd household-appliance drone-noise, and the final 8-minute track which features mysterious upright bass meanderings and spooky brushed percussion. To listen is like meeting two young men with their hooded coats zipped up to the top, faces concealed, and not quite knowing if you’re about to get into a vicious knife fight or a fun-filled juggling contest. Likewise, few clues to be found on the three-inch item Vergeetput (NO NUMBER), but this is a slightly more coherent set of unusual rumbling noise delivered in the continuous manner, and may have something to do with Central Radio in Antwerp (or may simply have been made using radio sets). It’s quaintly packaged inside a piece of gaily-coloured plastic shower curtain. As with Wouter, what Lume do is not unpleasant to listen to, it just feels slightly pointless. Both releases conceal a sense of playfulness beneath an impassive visage; Lume feel like they ought to appear on stage wearing cardboard masks with “Experimental Musician” printed on the foreheads.