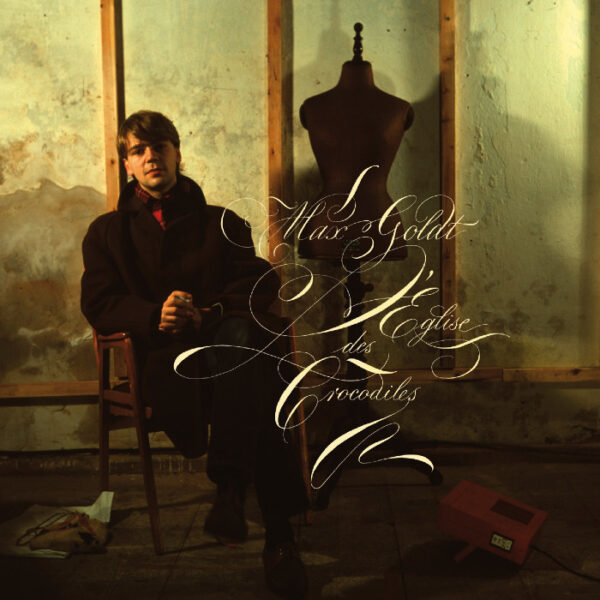 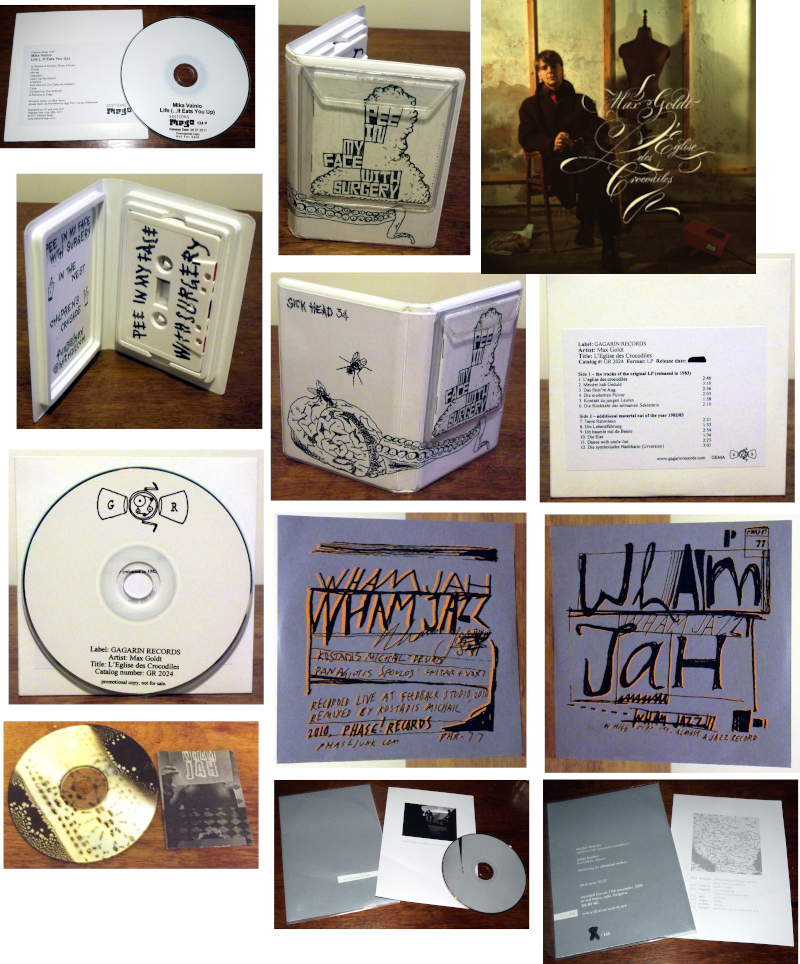 A cassette it be…short in length…Pee in My Face With Surgery, an American absurd noise combo comprising Fritz and Jaime from Peeesseye. In the Nest c/w Children’s Crusade (SICK HEAD 34) it be called, released on a small Glasgow label. Feedback noise shalt ye hear, guitars being unplugged and replugged, said devices raising considerable objections in the process. Shouting men using the alien tongue. Percussive cymbals punctuate these non-moments. A forgotten tea ceremony where tea is not actually served, instead a repulsive liquor dredged from the liver tract or brains of a dead crow is poured into china teacup. A small booklet of nauseating ink drawings is inserted for further repulsiveness. Brief though it be, this release will inflict a nasty dose of indigestion on the listener, whose consequences may be felt in the belly for long to come.

Max Goldt has won many accolades as a refined and well-dressed German creator active in many spheres beside music, including essays, comics books, spoken-word records, and prose. I would imagine his satirical bent (and I use the word advisedly) has endeared him to Felix Kubin, a known wag whose Gagarin Records released L’Eglise Des Crocodiles (GR 2024) on an LP in March this year. Side one compiles all the tracks from a deleted (probably rare) 10-inch LP of this title released in 1983, while side two serves up some related and unreleased bonus cuts from the same period. It seems the lyrics for this item, with its Quay Brothers-styled title, are both darkly humourous and slightly disturbing, not that I would know because they’re printed along with English translations on the inner sleeve of the LP which I haven’t actually got. 1 Musically, however, it’s an absolute killer – David Bowie’s “Berlin” period rethought as lo-fi homemade cabaret disco. Goldt uses strange and minimal percussive metal tapestries not unlike aspects of the Technical Drawings LP for this label, which was made by Americans but arrived in my hands in the same package. Also elegant piano fugues, lyrics sung in a snide and “knowing” tone, incredibly basic electronic effects, and a stripped-down studio methodology whereby he manages to make everything appear childishly simple. I always admire a creator who can pack a treasure chest of ideas into the length of a 3-minute (or less) track. Even if Goldt’s satirical dimension is lost on this non-German listener, this particular crocodile is something you should “snap up” immediately.

Now here’s another curio from the same label that brought us Slicing Grandpa. Wham Jah are the duo of Kostadi Michael (drums) and Panagiotis Spoulos (guitar and vocals) and they play for 28 minutes on Wham Jazz (PHASE!RECORDS PHR-77), a live studio recording which has the sort of piercing presence you could use to cut up sheets of steel. While the drummer works hard to bring form to the piece with his sporadically rock-inflected crash-footed approach, the guitarist strives to impair your nerve endings with his jangly, ill-fitting anti-riffs delivered in fractured bursts and making much use of slidey high notes to inject venom into your muscular system. This tension-inducing effect is not lessened by the near-constant shrill alarm siren of FX-ed feedback that drenches all. They seem to work better when ignoring each other; when the duo assert confluence and meet somewhere in the middle, the results are a little more pedestrian, but undeniably energetic even so. Think of Lightning Bolt without the costumes and masks and comic book imagery. Sometimes this pair are joined by the synth player Pavlos Gkousios (he doesn’t seem to be on this record), and when this happens, one can only imagine the amplified high end going into the stratosphere.

Another day, another record with a sandpaper cover. Action Mecanique (FLEXION RECORDS FLEX_001) was recorded by the excellent sax player Michel Doneda and Jonas Kocher with his accordion during 2009, as part of their Eastern Europe tour where they took in Sofia, Istanbul, Sarajevo and Belgrade. Despite the title, very little of the mechanical to be found in this instinctive improvised music, even if it does crawl along at the pace of a wet limpet on a reef. Slow and minimal process-improv was what they brought to the Balkans, and the watchwords were “explore and question” while they kept their actions as simple as possible. High-pitched and near inaudible long tones are alternated with very brief flurries of staccato action or slightly chaotic gestures, and gradually the record imparts a deep sense of tension and anxiety as all the intensity felt and heard in the room that day is drip-fed into your own personal environment, where it accumulates steadily. Flexion Records use Creative Commons licenses and make all their records available as downloads after the numbered editions have sold out, so you should stand a chance of hearing this as a download.

Life (…It Eats You Up) (EDITIONS MEGO 124) is the pessimistic conclusion of Mika Vainio, and who knows what personal disasters hath befell him to induce this vision of life as nothing more than a trip on the inexorable conveyor belt to the slaughterhouse. To demonstrate the oppressive and consumptive aspects of daily existence, he assigns quite cruel and depressing title elements to his music on this new album / double LP, a list which includes screaming, blood, humiliation, imprisonment, loneliness and hunger. Powerful themes. A friend of mine was recently recounting the glory days of Pan Sonic in the 1990s and remembering he wasn’t quite ready for their very advanced music at the time, but thinks he could manage to listen to it now. What then would he make of this intense groaner of electronic noise? It has little of the clinical chilled perfection of Pan Sonic’s precise music, and instead advances boldly into messier, more unkempt and raggedy eruptions, making uncertain and stuttering statements, and at times shading into the heavy textural music so beloved of Peter Rehberg’s more recent manifestations. Doubt, fear, and agony abound; the only feature that has remained constant since the 1990s is Vainio’s well-judged sense of remorseless brutality, and he still keeps piling on the pain in spite of your protestations. A tremendous amount of variety in this scrunched-up, digital hurt-fest; Vainio may put much of his raw material through the virtual car-crusher, but there’s a lot of non-stock vehicles arriving on his private trashheap and every compacted wreck ends up looking different to the last. Even a cover version of a rock song by Iggy Pop (‘Open Up and Bleed’) is transformed by this process into a turgid, digital monster, barely able to move its distended tentacles. The original album cover looks pretty bloodthirsty and brutal too, with startling images of beaten faces, meat, and blood-splattered tables. With ponderous lead-lined records like this one, Mego continues to forge its reputation as the home of a new and evil strain of updated Industrial music.