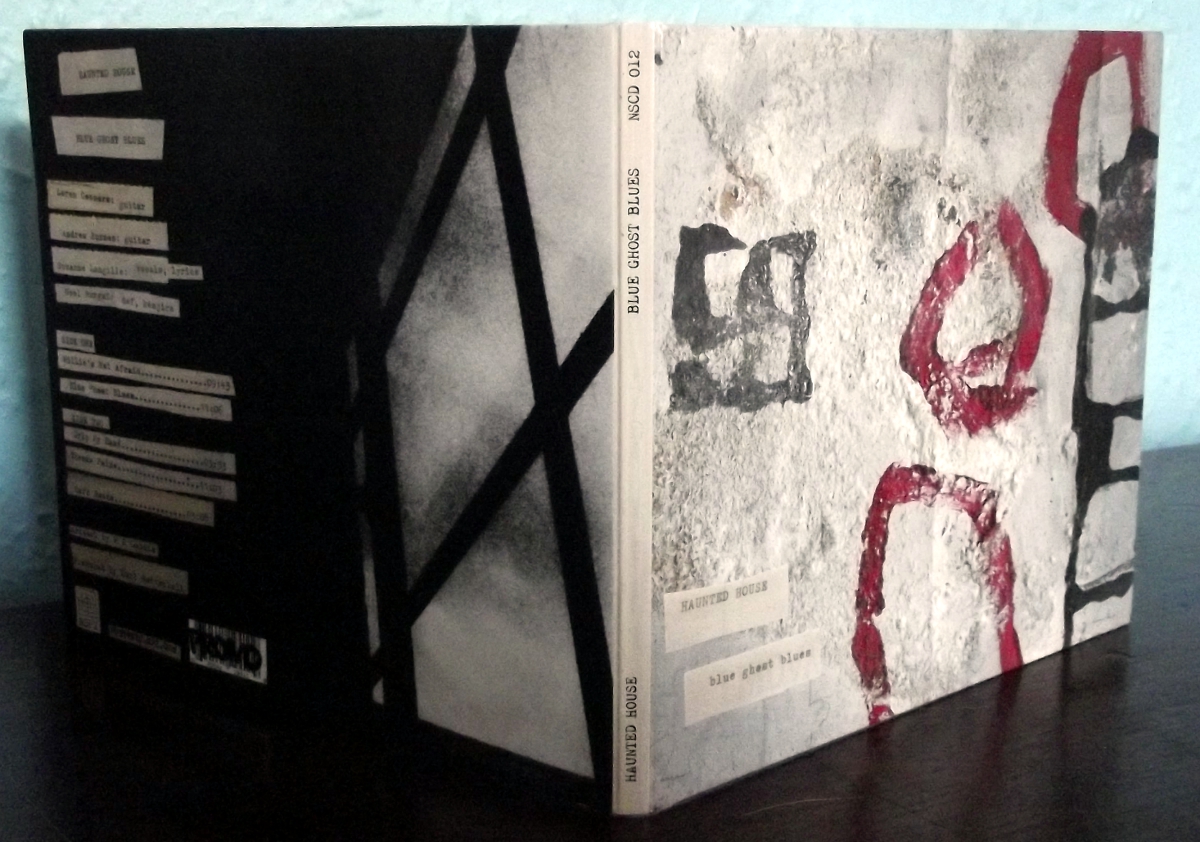 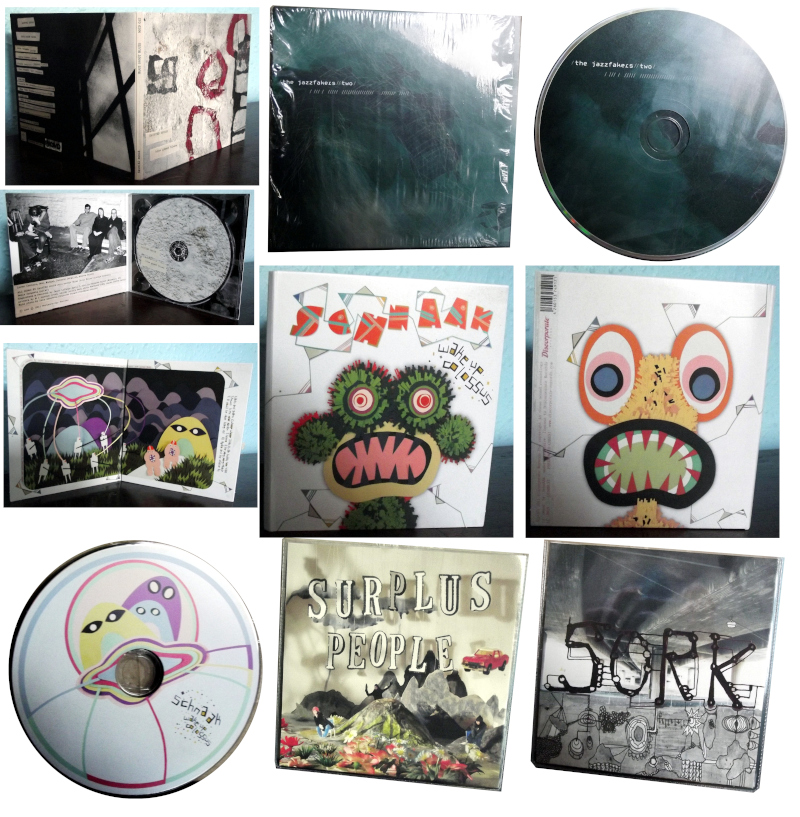 The guitarist Loren Connors is here with the Haunted House band on which he’s joined by singer Suzanne Langille (a long-term collaborator of his), plus additional guitarist Andrew Burnes and percussionist Neel Murgai. Blue Ghost Blues (NORTHERN SPY NSCD 012) happens to be their second album as a band after one they made for Erstwhile about ten years ago. Although three of them also appeared on a CD for Secretly Canadian in 1999. This one is quite a grabber; I was initially attracted by what I took to be the rock-like sound of their lengthy workouts, finding much heavy electric guitar noise. But the more you listen into it, the less like actual “rock music” it seems, and you need to look to art-guitarists like Keiji Haino, Matthew Bower and Li Jianhong for comparisons. One prominent feature is the complete absence of conventional bar structure – ‘Millie’s Not Afraid’ just keeps chuntering down the endless road for nine minutes without once shifting key, as straight and unstoppable as the Super Chief. Another highly useful feature is the superb percussion work by Murgai – he’s playing the daf and kanjira, both types of frame drum, in a manner that clearly doesn’t fit the conventional four-beats to the bar rock mode, plus he’s avoiding the clichés of cymbal crashing and bass-drum malarkey that even Sonic Youth’s drummers couldn’t escape. A third anti-rock hallmark is the vocalising of Langille, particularly on the title track. Unlike your average Patti Smith wannabees, she doesn’t feel the need to fill every available minute of the song’s space with pearls of wisdom from her lyric book, and I’m deeply impressed by her minimal interjections – fractured lyrics, barely fitting the underlying rhythm, highly poetic in nature, in a pale voice sounding distraught and strung out. Meanwhile both guitarists are working up their private rainstorms, clouds of fogged-up near-noise which only just form into a single chord; and choppy rhythmeering slices of right-hand work that confound our expectations at every turn. Again, this track is all of apiece, a single howling lament of ghostly doom that sticks tenaciously to the work at hand without varying tempo, pitch, timbre or applying anything to do with song structure. That’s pretty much side one of the vinyl edition; I’m expecting more great things when I hear the flip. To my discredit, I never got “into” the solo guitar records of Loren Connors in the 1990s, and on evidence of this I need to do some serious back-pedalling. Meanhile, this release is very recommended!

Now here’s a side project of Robert Pepper from PAS in NYC, The JazzFakers in which he plays violin and electronics and is joined by the sax & synth player David Tamura, bassist Raphael Zwyer, and drummer Steve Orbach. Two (PAS RECORDS 011) is an immensely enjoyable record of lively instrumentals propelled by angsted funky basslines in hock to James Chance and The Contortions, while violin, sax and keyboards add jazz-inflected top lines and occasionally scrabble up the surface with a frottage of electronic white fizz. Indeed the intention is to combine avant-gardish noise elements with “mainstream hooks”, and the formula works well, even if the band sometimes come across like weisenheimers. The drummer attempts pastiches of various swing and fusion rhythm styles with an audible smirk on his face. As the band name and track titles will clue you in, all the musicians are slightly poking fun at jazz (especially fusion and funk-jazz LPs of the 1970s and virtually anything featuring Jean-Luc Ponty, Chick Corea or Ramsey Lewis) but also cheerfully admitting they don’t quite have the chops for the job, as evidenced by the endearingly clunky piano riffing on ‘Fakin’ the Rapture, Fakin’ the Jazz’ for example. For those listeners of a more adventurous inclination, the track ‘Kenny G Voodoo Ceremony’ has virtually no melody or beat, and is largely a free-form electronic fuzz-out of atonality with spooky echo effects on top. Nifty item, only the indifferent sleeve art disappoints.

Another fun item is Wake Up Colossus (DISCORPORATE RECORDS DISREC17) by SchnAAk, which is two fellows from Berlin, the drummer Johannes Döpping and Mathias Jähnig, who probably plays everything else. Between them, these two hi-energy zanesters probably subsist on a diet of fortified coffee, ten cups of it, to wash down 18 bowls of Coco Pops cereal every morning. Once they get in the studio, hyperactive mayhem breaks out like a rash on the backside of a six year-old with impetigo. Ten examples of sophisticated contemporary pop music with elaborate drumming, playful experimental studio technique, and an overall sense that their mixing desk was full to overflowing with new ideas and new content at all times, as if even a 48-track console wasn’t enough to contain all their explosive energy. The album is crammed with elements of avant-garde composition, pop music, hop-hop, crazed heavy metal guitars, and ultra-fast drumming that even Boredoms couldn’t keep up with; and usually you’ll get all the above shopping list and more, packed into a single song, like the perfect candy bar that contains nuts, toffee, biscuit, raisins and marshmallow in a thick coating of milk chocolate. Full marks for excess, stylistic insanity and hyper-energy in the music; the weak link is the vocals. The singer is somewhat affected and seems listless, bored, although this is probably a post-modern ironic pose in keeping with the faintly sarcastic tone of the album, which is a shame as he’s got a very smooth and soft alto range to his crooning and a distinctive twang to his fake American accent. Can’t understand the lyrics, of course. As you can tell, half of me is is unsure where to put myself with this odd record; I (and you) might want to hear more of the players’ other activities, including The Season Standard, Kayo Dot and Tarentatec.

Surplus People / Sork (SURPLUS01) is a vinyl split by two Swedish-Finnish bands, and it’s the first release on the Swedish label Surplus Recordings. Actually it’s pretty much the same line-up in both bands, it’s just that Surplus People evolved into Sork when the drummer joined the band, and there’s not much appreciable difference between the songs or music styles on each side. But this is all OK with me. The band(s) self-consciously imitate post-punk rock of the late 1970s and play a retro-styled organ and fuzzed bass guitar with a clunky drumbox, to accompany the shrill and shouty vocalising of Magdalena Ågren; all told the nearest reference point might be Lilliput. The addition of a trombone to ‘Toxid Time’ makes for one of the oddest instrumental passages you’ve ever heard. Entertaining, they all play well, the LP sounds great and has many uplifting moments where connections really sparkle between the musicians, even if the singer lacks enough genuine emotional force to give real internal meaning to the songs.