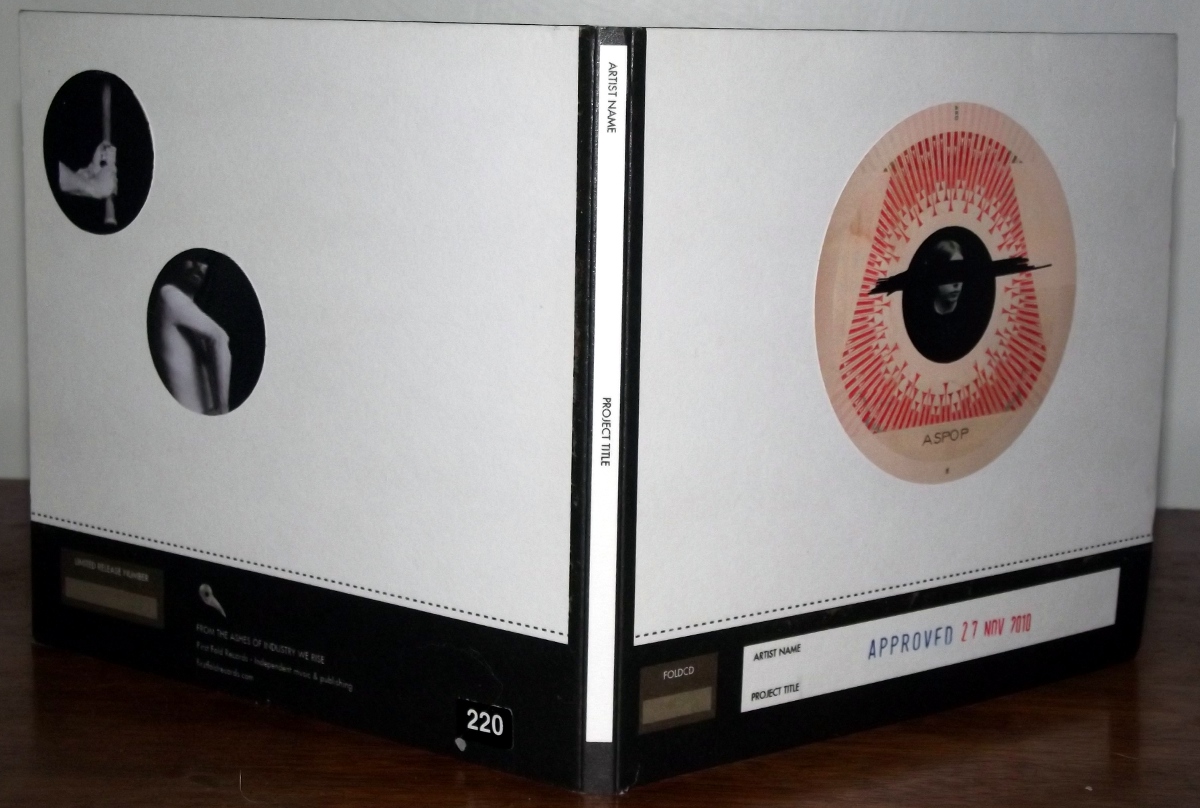 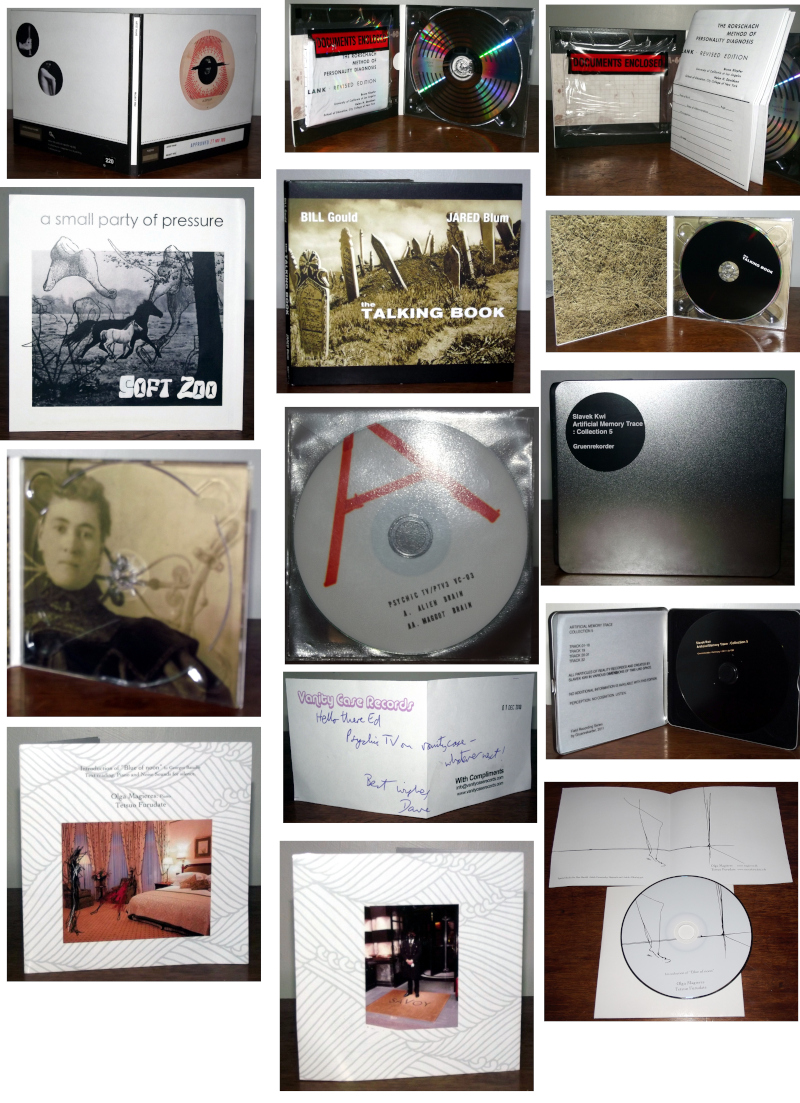 Small Cruel Party at the Zoo

An unsettling item of ambiguous electronic music is Soft Zoo (FIRST FOLD RECORDS FOLDCD011), a record credited to A Small Party Of Pressure, a cabal of mummers which includes the massed talents of Justin Wiggan, Mark Vernon, Anders Gjerde, Hild Sofie Tafjord and Lois Laplace. Some of these names I recognise and have even enjoyed their work in past years, but none have ever appeared in quite such strange and shrouded disguise as this. Faintly murmuring and non-melodic synth tones and electro-acoustic treatments float around in heavy syrup like menacing jellyfish in this fairground of the paranormal, where all the sideshow barkers whisper in unknown tongues, and I don’t even remember buying my entry ticket. As to disguises, even the CD cover gets in on the act, attempting to mislead and distract with confusing or inaccurate information; the spine simply states “ARTIST NAME / PROJECT TITLE” in a generic fashion, the cover stickers give glimpses of visual information that is puzzling, there are errant numbers, and what does the date stamp “APPROVE 27 NOV 2010” mean? To cap it all, they insert a piece of paper which when unfolded turns out to be the form for a Rorschach test, clearly implying that as listeners we will find within this music reflections and apes of whatever secrets lurk in our murky brain-pans. Enter this labyrinth by all means, but be sure to bring Ariadne’s golden thread before ye confront your inner Minotaur. The centre-piece ‘Skin’ is an agitated noisy growler which suggests a lot about the seething Id that lurks at the centre of this psychological maze, but remainder of record tends to reside in the area of Nurse With Wound or The Hafler Trio, and very expertly done too. “From the ashes of industry we rise,” is the motto of the record company that released this head-scratcher.

Music of my Mind

The Talking Book (KOOLARROW RECORDS KACA 027) is an album which probably would like to cross over into similar zones of psychic ambiguity, but as title suggests it’s far more concerned with narrative elements, however non-referential and unspecific they may be. Bill Gould used to be the bass player in Faith No More, and he teamed with the experimental sound-scaper Jared Blum to produce this set of rich drone-form pieces packed with plenty of tasty textures and maintaining a dream-like sinister aura at all times, through careful monitoring of images transmitted via the “Oneiric Helmet Device” while in the studio. It’s made with guitars, pianos, voices and perhaps some resampled vinyl LPs for that extra analogue crackle layer. Many of these sound sources are subjected to intense processing and reprocessing, and cleverly aligned to form ingenious layers where we can “see” several sound layers at once through the windows of their immediate neighbours. Cover photos of nameless Victorian lady and picturesque tilted gravestones (note non-Western lettering thereupon) add further mysterious clues.

The Clones of Dr Funkenstein

Did someone say “psychic”? How about a Psychic TV / PTV3 release on a small private press UK label Vanity Case Records? I have a CDR pressing in front of me but Alien Brain Vs Maggot Brain (VANITY CASE RECORDS VC-03) came out as a limited edition 12-inch vinyl item about one year ago. The A side is a piece of doom-tinged psychedelic freakery showcasing the crisp axe-work of Jeff Berner, which keeps the listener in a state of drooling anticipation for a good five minutes before letting rip with generous gobs of mind-frying excess. True believers in this kult band may prefer the flip, which turns out to be a cover of the famous Funkadelic song (of all things), sung by the man Gen himself and transformed into a mutoid piano ballad with the help of Jess Stewart’s overwrought romantic keyboards, then propelled into further pompery by heavy wah-wah guitar and drumming. Nick Cave couldn’t have done it better…I’m not as clued in on PTV’s work as I should be, and this is probably not a “typical” release, but I wasn’t expecting anything quite as, erm, dramatic as this slice of theatrical eccentricity, as heavy and unexpected as a Lardy Cake spiked with thorazine. Whatever next, indeed. Well, the second part of this trilogy, with a cover version of ‘Mother Sky’, is available now.

Ah, here’s something a bit quieter from Slavek Kwi / Artificial Memory Trace. Collection 5 (GRUENREKORDER Gr080) is housed in the familiar Gruenrekorder metal cigar case, and it’s 32 tracks of unidentifiable sounds. In fact we’re positively discouraged from trying to work out what we might be hearing to, if I understand correctly the stern admonition ‘Perception. No Cognition. Listen’ which is printed inside. Other sound-artists may be content with the term “field recordings”, but Slavek Kwi insists he deals in “particles of reality” which are “recorded and created in various dimensions of time-like space”. It’s an absolutely beautiful thing, more like a force of nature (or several forces of nature) than a contrived work of art. Listen for all 79 minutes and you may indeed experience the cross-dimensional teleportation effects that are hoped for, as you focus your interior microscope viewer and your mind is lost in wonder and engagement with these quiet, intimate, and unearthly soundings. Where Chris Watson would like us to share the miracles of creation through sound recordings supplemented with meticulous written documentation and tied to specific earthly locations, Slavek Kwi prefers us to leap into the experience “blind”, and feeds us raw, pulsating information through both ears without the aid of contextualisation. Hone your perceptive skills with this excellent release.

Invitation to the Blues

Since we seem to have grabbed up a handful of brilliantly perplexing records today, what better to fit the bill than Introduction Of “Blue Of Noon” (MONOTYPE RECORDS MONO 029), credited to Olga Magieres and Tetsuo Furudate. Olga, an Academy-trained Polish musician, is providing piano improvisation on her Steinway, and the born-again Industrial musician Furudate is making other unknown sounds. You might understand my slight trepidation in approaching this disk as it includes a reading from the written work of Georges Bataille, the transgressive French writer, on track two; and I long remember Furudate as the co-author of World As Will, a Nietzsche-themed series of abstract noise records he’s made with Zbigniew Karkowski, from which I’m still reeling after hearing the second volume in 2002. So I anticipated some violence or general sense of darkness, but instead this turns out to be a gorgeous hour of dream-like lyrical oddness, with virtually no explanations and completely inscrutable in its strange logic. Its many cultural layers are deployed like cryptic crossword clues to create a very specific effect, and many of the resonances are lost on me, but it’s a shopping list includes not just Bataille but also Chopin, Bach, Gershwin, and Harry Warren; a strange mix of surrealism, spoken word, classical chamber music, and tin pan alley, all shot through, disturbed and desiccated by Furudate’s singular humming and electronic howling sounds, his dissonant metallic shrieks, and his stern-faced near-silent utterances. The concepts extend to the oddness of the sleeve art; are these wire sculptures in a hotel room, or simply a doctored photograph with line drawings added? This release is certainly something to puzzle over, but it’s also a fascinating record of avant-bizarritude too.