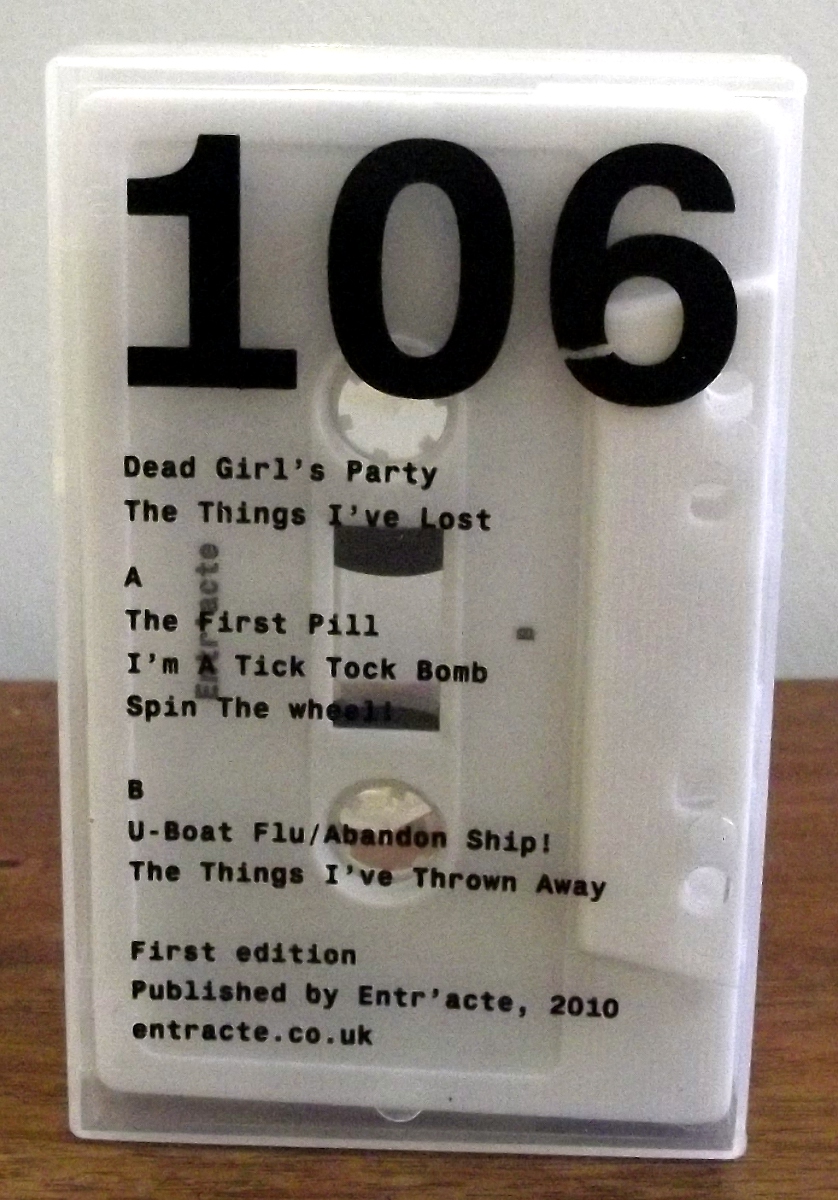 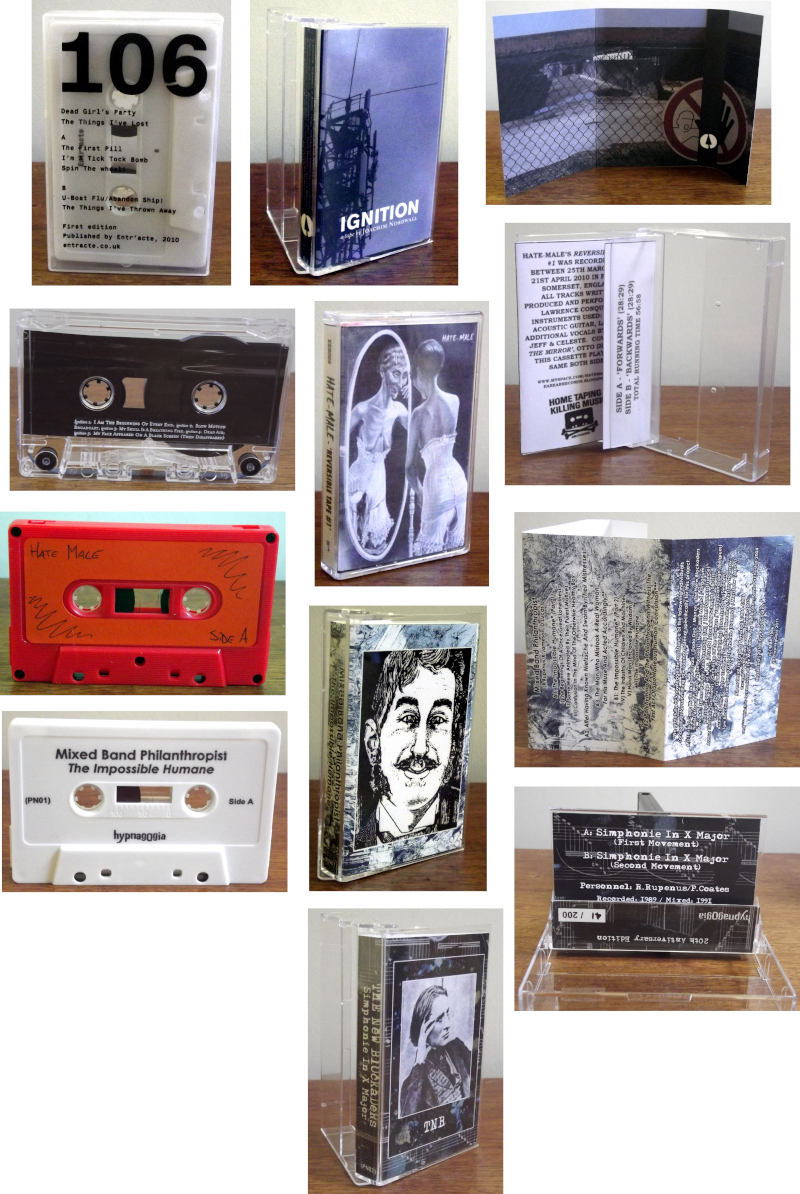 Some fine cassettes pulled out the boxes of late. Dead Girl’s Party is a Scott Foust (Idea Fire Company) side project where he teams up with Matt Krefting, who I think has occasionally played in live IFCO lineups. The Things I’ve Lost (ENTR’ACTE 106) combines droning synths, electronics, radio waves and guitar with vocal wailings, tending to convey a raw sense of desperation and futility on dirges such as ‘The First Pill’ and ‘U-Boat Flu’, or a postpunk-riddled anger on ‘I’m A Tick Tock Bomb’. Their spare sound and interminable repetitions are highly commendable, and at times the tape harks back to Foust’s first band XX Committee from the early 1980s, although Dead Girl’s Party are not quite as suffocatingly intense. Foust would probably disavow it, but I think this 2010 release could appeal to listeners of the so-called “Cold Wave” genre, and with its generally bleak tenor it sometimes feels like a lost record from the United Dairies catalogue.

Swedish electronicist Joachim Nordwall has penetrated zones of deep gloom and anxiety with his grimoire-styled work as one half of the noisy Skull Defekts, but his cassette Ignition (ASH INTERNATIONAL ASH 8.9) contains five rather subdued drone-pieces made from analogue synthesizers, fed through effects and computer processing, and most of them purr along quietly in the layered idiom with tinges of the sinister curling around at their edges. Assembled over four years and in several different international locations, the actual musical content of Ignition may not be large, but your listening pleasure is delivered by the subtle changes in timbre and texture that are gradually enacted. Largely a slow-moving album, although there are passages where sequencer rhythms and patterns are overlaid together to create vaguely hypnotic op-art effects. Using the cassette format appears to have enabled Nordwall to really stretch out into infinite lengths in ways which are not possible on the CD, even. The mysterious track titles, almost like chapters from an existentialist horror story, do not exactly inspire good cheer.

Just mentioned English noisester Hate-Male the other day, and I forgot we had this odd tape from him also. Reversible Tape #1 (EAR EAR RECORDS EER006) is a powerful electro-acoustic experiment built out of voice tapes, guitars and laptop processing, but it’s the voices – echoed, overlaid, multiplied – which form the core of the work, and three friends add their voices to Lawrence Conquest’s to supplement the eerie vox humana wall. In the context of Hate-Male’s other brutal releases, this tape is quite subtle and approachable, and might be a good starting point if you’re tempted to investigate this creator’s world of surreal insanity and sonic violence. The keynote of Reversible Tape #1 is sheer gaping horror rather than violence, and the unsettling Otto Dix cover painting which reminds us all of the fleeting joys of youth and our own approaching mortality, is just the beginning. A truly grisly ghost-train ride in both aural and psychological terms, and the light at the end of the tunnel is a long way away. The tape purports to play the same content both sides; the B side may run backwards, but I can’t verify that. 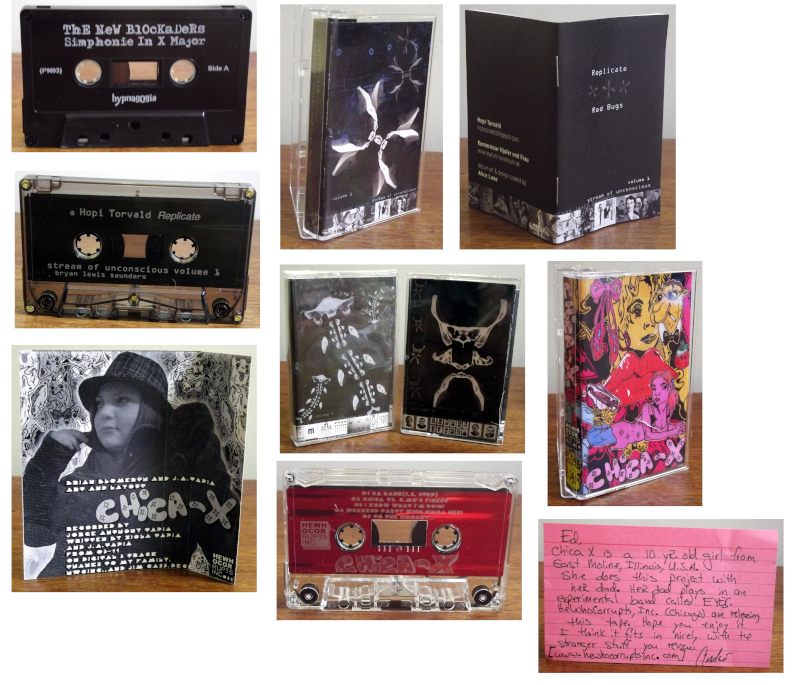 No less unsettling are the Streams Of Unconscious (NO LABEL) tapes sent to us by the American writer and performance artist Bryan Lewis Saunders. Three volumes I know of so far; the first is Replicate, a collaboration with Hopi Torvald, and Kommissar Hjuler and his wife with Red Bugs. Saunders has been documenting his sleep-talking and dream states for many years, even recording his own sleep-talking on tape. For this series of projects, he sends out the tapes to musicians and sound-artists to refashion them as they will. Torvald creates a suitably ambiguous tapestry of nightmarish ambient music, whose very disjunctiveness does its level best to follow the twists of Saunders’ mind. For this side of the tape, Saunders’ continual mumbling becomes one more element in the mix, and the overall effect will gradually unhinge your mind. Full transcriptions of the sleep-raps are included inside little printed booklets with the releases. The Kommissar Hjuler side is quite different, looping and repeating a single short phrase of the sleep-talking as the basis for an invented song, a dark nursery-rhyme plucked from the deepest recesses of the brain. The endless repetition of ‘objects…supernatural’ will probably send you to the bughouse in short order, but since Hjuler is a Dadaist nutcase of the first water anyway (and I sincerely mean that as a compliment) he is a perfect candidate for a marginal aural experiment of this nature. Also pictured, not yet heard: Volume 2 with Razen and Classwar Karaoke Friends, and Volume 3 with Evil Moisture and Wehwalt. If you’re a fan of the record Dion McGregor Dreams Again, prepare for something so powerfully odd that McGregor will soon seem positively quaint and charming in comparison.

More Richard Rupenus product arrived in September and November, cassette reissues of existing works, both in limited editions of 200 copies. Mixed Band Philanthropist‘s The Impossible Humane (HYPNAGOGIA PN01), mostly recorded 1984-1984 and now remastered by Paul Coates; and Simphonie In A Major (HYPNAGOGIA PN03) by The New Blockaders, a 1989 recording originally issued on vinyl in 1991, now here with new sleeve art. These items have already been covered in previous issues of the magazine, and this is just to let you know the tape versions exist.

The Chica-X (HEWHOCORRUPTSINC) tape is an oddity we’ve had in the box for some time now sent to us by André Foisy of Locrian. The story behind it is explained on the enclosed letter written on a bright pink index card, which I have photographed. Chica-X, just ten years old at time of recording although she’s been doing it since age seven, sings her take on modern electropop and raps her little heart out; the way she intones “To the library…and step on it!” is sheer brilliance. I thought this release might be somewhere in the area of The Shaggs (untutored / naïve expressions of pop music) but of course it isn’t; Chica-X is clearly as well-informed and sophisticated as you’d expect from a 21st-century urban American youngster and probably has more street smarts than the average X-Factor wannabee from Solihull. The main listening interest here derives from her distinctly odd and highly-enthused way of burbling out the words in her thin but feisty voice. If anything, the musical backdrops supplied by her Dad are the boring bits; he may play in an experimental band, but here he’s transformed himself into a cheap karaoke machine. Not sure about availability of this tape, but these five tracks are available as a digital download; and there are YouTube videos of Chica-X too.