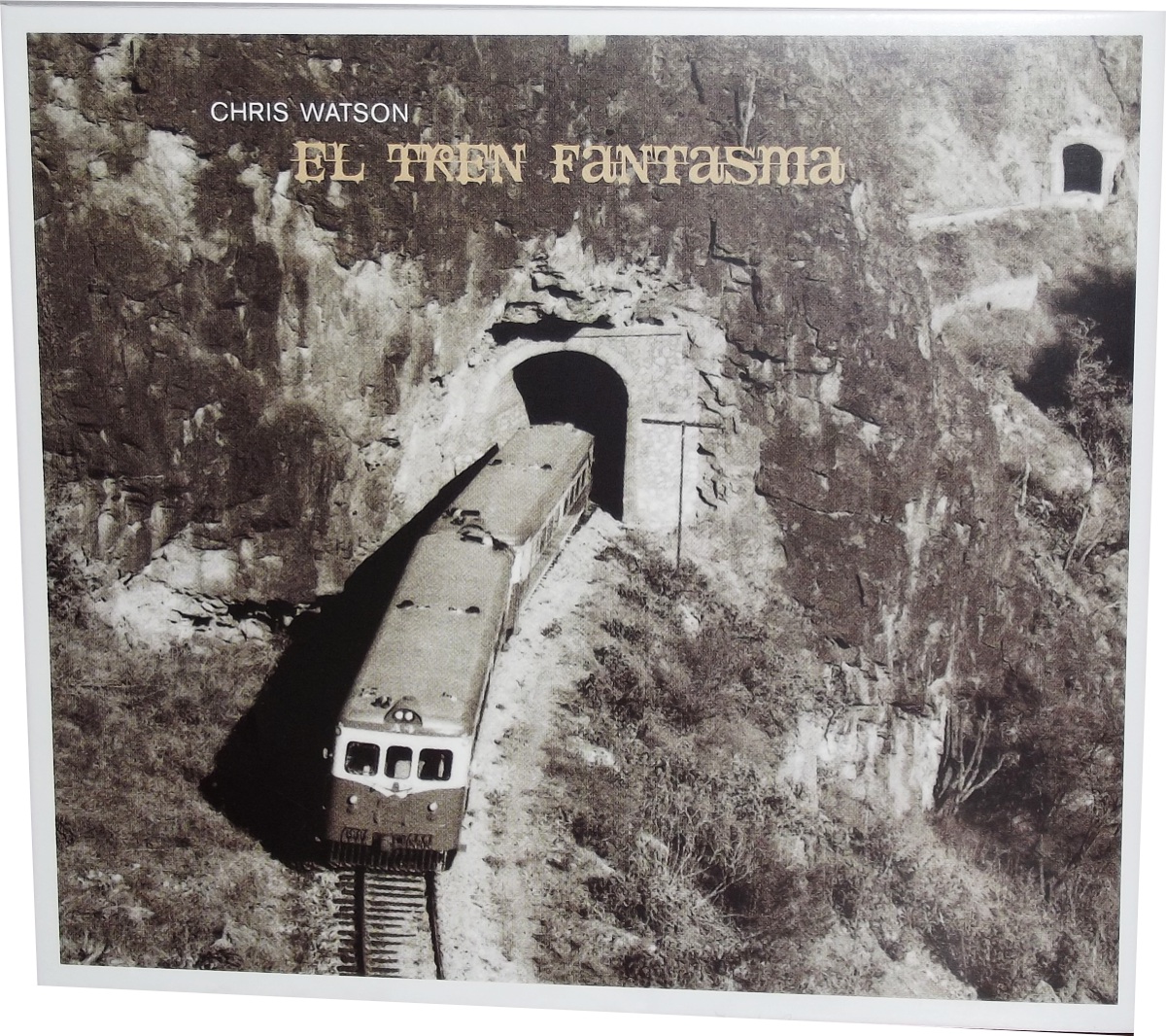 Chris Watson‘s El Tren Fantasma (TOUCH TO:42) is a new work where he’s using his field recording and editing skills to create an elaborate electro-acoustic collage, a suite of ten pieces which almost tells a story. It has something to do the with Ferrocarriles Nacionales of Mexico (whose logo even appears on the disk artwork) and “the music of a journey that has now passed into history”. When he began releasing his intense field recordings as music CDs to be listened to, Watson pretty much served up pieces of nature in the raw, including animal roars and bird song from some far-out exotic locations, and did not really attempt to tell stories very much; instead the trademark of his exacting liner notes was to detail the recording equipment used, give very precise map locations, and the precise time and date. He was the sonic scientist logging his experiments, in case anyone wanted to repeat them. Later, with the African suite on 2003’s Weather Report, he started to meld, merge and elide several recordings together, creating a much more narrative-like epic sweep across time and space, and also building a very exotic and “impossible” vision of reality. I would situate this “Ghost Train” record in this latter vein. With the splendid old photographs and map drawing that adorns the cover, this composition is a piece of sonic “magical realism”, Gabriel García Márquez as a series of vivid sound portraits. There are recordings of engines chugging along, on some quite antiquated machinery by the sound of things, and several stopping points in the journey where the listener is immersed in bird song, insects buzzing, and all the things that make the environment so vital and alive to Watson’s sensitive mics. The journey is framed, like a poem that uses ring-composition, with a railway announcer’s voice speaking in Spanish and English; while we’re exhorted to board the ghost train at the start of the piece, the final track sadly announces that the service is now closing down. It’s my guess that both of these clips must have been contrived in some way (they don’t feel like authentic documentary captures), but either way they are pure poetry. In the second one, this anonymous woman has so much finality in her tone she sounds like the voice of God, closing down the world.

Another way in which Watson’s technique has evolved is the fact he now allows post-production treatments; the most noticeable is that the sound of the engine machinery has been heavily processed so that, for a good deal of the record, it doesn’t really resemble a train at all, but has been filtered down into a series of digitally-smooth clunks, thumps and clanks. To put it another way, we’re hearing digital music that is fashioned using the rhythm of the train as a trigger device, like a studio drum programmer with his “gated drums”. In like manner, train whistle recordings are heavily echoed and stretched until they turn into ambient drone music. At first, this seemed to me to run counter to Watson’s original ethos of authenticity and truth in documentary recordings. But then it’s clear that El Tren Fantasma is not a documentary at all, but a valedictory paean for a vanished age of locomotion (something which is even more under threat with the menace of high-speed trains this century). As such, these treatments succeed in rendering the train into a true ghost, an echo of its former self, and its phantom runnings through tunnels and over dusty tracks become that much more poignant thereby.

It remains to mention two related precedents for this release. The first is Runaway Train (ASH 1.9), a 1994 release on Touch’s sister label Ash International. This is a “found” tape rather than a composition, but it has a life-or-death subtext which is not too far removed from El Tren Fantasma. The driver of Runaway Train may be about to end up as a ghost himself. There’s also something indefinably compelling about the distortion of the voices on both records; unexpected messages from the past. The second precedent is Pierre Schaeffer’s famous Étude aux chemins de fer from 1948, and Watson himself explicitly tells us El Tren Fantasma is “Inspired by Pierre Schaeffer’. Yes, both composers used the same source material and made music from the sounds of trains, but I think what’s also important is that Schaeffer’s early piece of tape collage is widely regarded as the first published statement of musique concrète, and is often used as a touchstone by others (Lionel Marchetti is one I can think of who has quoted it in his own work). Étude aux chemins de fer is as historically important as one of the earliest pieces of cinema – L’Arrivée d’un train en gare de La Ciotat by the Lumière Brothers (1895) which, very coincidentally, shows a train arriving at a station.

Philip Jeck‘s An Ark for the Listener (TOUCH TO:81) has been with us since 2010. Jeck has long been recognised as an innovator with turntables and old vinyl, and when I spoke to him in 2003 he seemed almost nonplussed to be held in the same regard as Christian Marclay. But it could be that the Dansettes and old records have become something of an albatross for Jeck, and this release may represent an attempt to evolve and expand his sound. Record players are here, but so are keyboards, minidisc recorders, a mixing desk, a bass guitar, and effects pedals. In fact at first spin it’s almost impossible to find the old reassuring swishes, crackles and stuck-record loops that have been Jeck’s signature sound for many years. Like Watson above, he’s going for a blending and layering approach that smooths out many of the rough edges, and transforms signals from vinyl into lush mixed chords of ambient music. At first, it seemed a bit too smooth for me, but a patient listen to the whole suite will reveal a tremendous amount of meticulous detail.

He’s doing it in the service of another meditational piece which, like Sand and Suite before it, involves contemplation of death, loss and bereavement in a very personal and heartfelt manner. In this case, it’s about five people drowning in the ocean in one particular verse of The Wreck of The Deutschland, a poem by Gerald Manley Hopkins. The drowning nuns slowly reach an epiphany across seven long tracks and a two-part coda; along the way, the piece immerses us completely in its very fluid soundworld (‘The All of Water’), finds consonances between souls and shoals, and makes aural rhymes between church bells and ship’s bells. In Hopkins’ original poem, the ‘ark for the listener’ which may rescue mankind is a symbol of God’s compassion and mercy. It would not be inappropriate in the context to view the ‘Pilot’, named here on three separate track titles, as God himself, the pilot of the cosmic ship of mankind, and the religious of this work meet their fate stoically and prayerfully. I find resonances with the 2007 version of Gavin Bryars’ The Sinking of the Titanic, another maritime ship-sinking valedictory work of tremendous import, to which Jeck added nostalgic textures with his turntables.