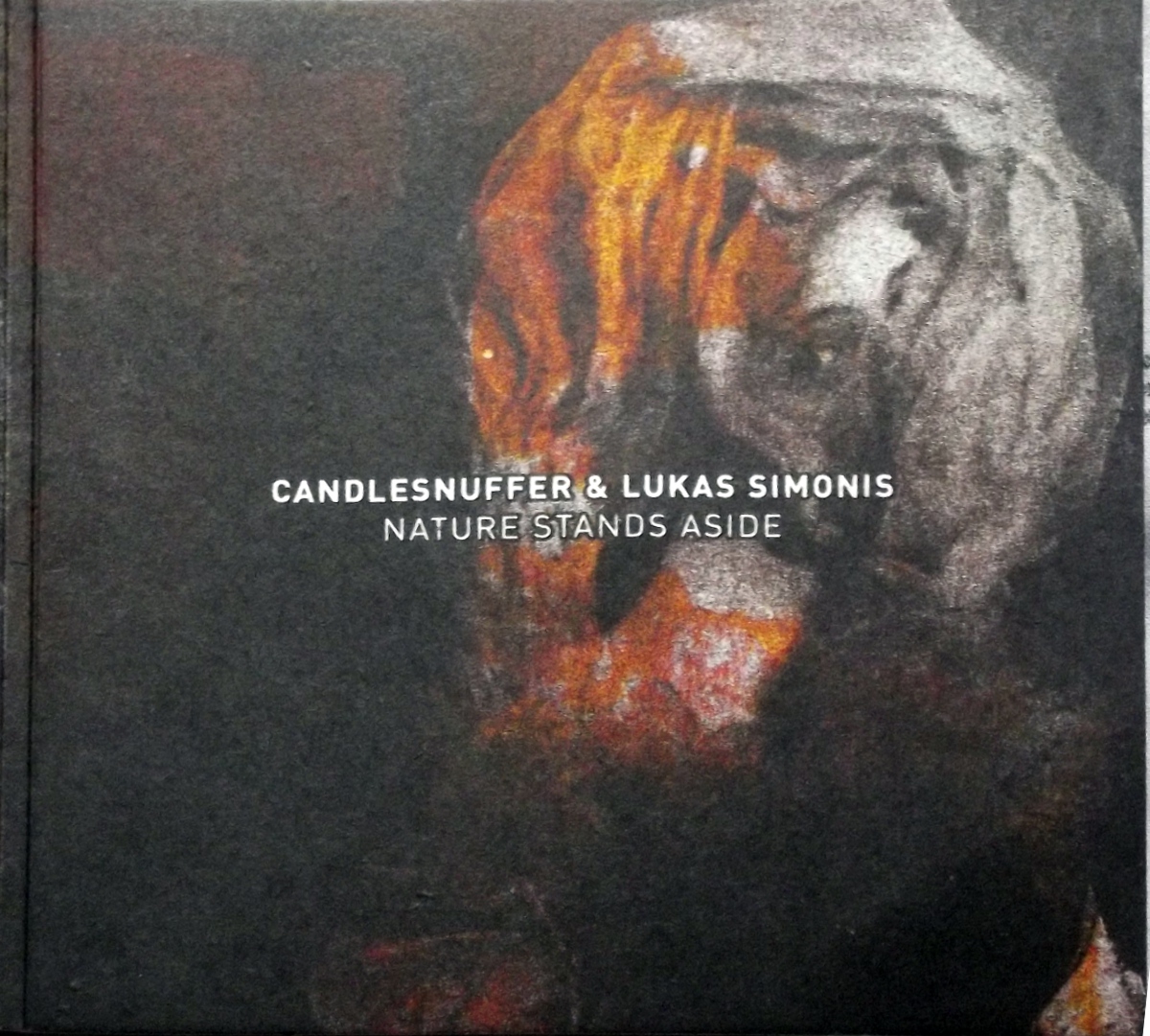 The Dutch multi-media talent Lukas Simonis teamed up with Candlesnuffer in 2011, and they did tour for a time in the summer of last year. In October they also sent us a copy of Nature Stands Aside (HELLOS SQUARE RECORDINGS CUBE046 / Z6 RECORDS Z6009060300), where the two of them meld and clash their improvisational skills together, like two avant-garde hamburger chefs grinding the meat. Right from the opening few seconds, it’s a very unnatural sound on the record, and it becomes even less familiar as we delve in. What’s going on? Very few clues are provided in the cryptic press release, but based on a YouTube video rescued from the gigs, my guess is they might both be playing guitars; Candlesnuffer (.i.e. Dave Brown) is an improviser from Melbourne who has played with Bucketrider, Western Gray, and as part of a trio with Pateras and Baxter, and he’s certainly a six-string wielder of the first water. Nature Stands Aside contains a lively and abrasive assortment of non-musical, mostly acoustic, eruptions and creaky scrape-a-thons, episodes where the frenetic fondling and stroking actions of the stiff wooden necks occasionally resulting in harmonics and vibrations that might be mistaken for musical notes. There’s also plenty of percussive and frottage effects that jangle your bones like loose change in the pocket, and odd whimpering and whining that might be generated from highly unconventional fingering and slide techniques. In all, a forward-looking collaboration that suggests strongly the makers are intent on expanding the vocabulary of the improvised guitar, even if it comes at the expense of ordinary listening pleasure. However, the project may have something even more radical behind it. “Doing ‘abstract’ stuff and actually ‘improvising’ (even worse!) means ‘failing the best we can’,” explains Lukas, enclosing many phrases in inverted commas to underscore his point, and sounding a tad fatalistic about the possibilities afforded by free music. It seems they revisited the recordings (made in 2010) after about a year and Lukas confesses “we were very fond of what we heard”, before going on to make some references to natural anomalies and irregularities that remain obscure for me. I suspect this album will remain indigestible in places, but my advice to you is keep on chewing and see. The sleeve is a frieze of blurry quasi-Gothic images by Adam J Bragg which at first made me feel we should be getting a record of mysterious dark droning. How wrong I was.

Another item from the Chicago Peira label showcases our favourite improvising cellist Fred Lonberg-Holm, here scraping his bow in a duel with the “no-output turntable” of Aaron Zarzutzki. If you want expanded vocabularies for an instrument, few have done more than Lonberg-Holm to deepen and enrich the basic sound of the cello in an improvising context, and as this record shows he has the speed of thought of a thousand Greyhound buses enabling him to respond quickly and appropriately whatever the situation. Additionally, his arms and fingers are as supple as if a young Amazonian sapling had come to life and were able to bend its twigs around the neck of a stringed instrument; for this, try and imagine a sort of teenager-oriented 1990s remake of From Hell It Came. In amongst the wily scrapes and plucks from Fred, incidentally about the most abstract and least conventionally jazzy of any date I have heard from him, I assume Mr Zarzutzki is contributing these bizarre semi-mechanical grinding sounds, perhaps through studious use and abuse of his turntable which may or may not be amplified and almost certainly has no records sitting on the deck. Together, they certainly produce a euphonious blend, and while the music is intensely hard to follow it is by no means as fragmented as the efforts of Simonis and Candlesnuffer above. “This work necessitates further study with a detailed listen,” is the suggestion of the press note. I agree, but I also think the act of listening here should be likened to a session with an outlawed contortionist, or a chiropractor who is about to be stricken from the register for his dubious use of the medieval rack device. In short, most of what I hear is twisty and turny content, made all the more envigorating for being played in real time. The odd title for this release Feminization of the Tassel (PEIRA 08) almost feels like one of the wryly comic titles devised by Derek Bailey for some of his Incus tunes, while the track titles here, with numerous references to spikelet meristems, have something to do with the properties of cereal grains that I don’t understand.

Melodic ambient-electronica of a sort from Minamo, a Japanese quartet of fellows who put together keyboards, guitars, and computer processing to create their not-unpleasant tunes, which have previously found a home on 12K and elsewhere. All the music on Documental (ROOM 40 RM443) is semi-improvised, and unlike both the records above is clearly not intended to agitate or disturb the listener; the press note praises its qualities with words like “floating” and “understated”, and the producer Lawrence English thinks highly enough of the group that he collaborated with them in 2010 on A Path Less Travelled. I do like the clarity of the recording process and the finished production, which has ensured that every single sound stands out as cleanly as a serving of fresh spring water served in an expensive designer glass, probably in a white-walled room where all the furniture is simple blocks of unpolished wood and the single window gives a view onto a mountain top. The restrained chamber-music piano sound which opens most tracks has its charms, as does the guitar sounding like a koto (or perhaps it actually is a koto). But for some reason, on today’s listen my body resists falling under the mesmerising spell that is clearly intended, and all these Eno-like performances just feel a bit too static for me. It would be a mistake to call this simple music “cluttered” and the four players are highly respectful of each other’s space, but I wonder if it would be interesting to hear them work in smaller units within the group – say two players at a time, a strategy which might bring out a little more of Minamo’s gifts for invention and interaction.