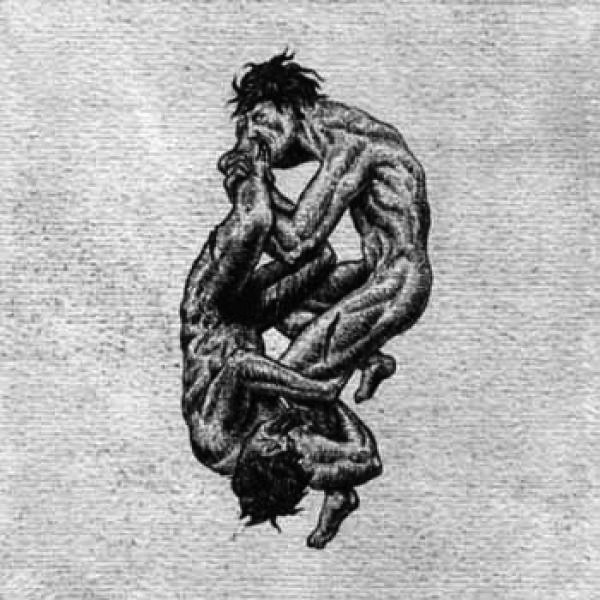 One of the great mysteries of life is why this piece was offered as a split LP with fellow French fiends S.V.E.S.T.’s Le Diable est ma Raison on vinyl but as a separate release on CD. Couldn’t the two bands have appeared on CD as well? Perhaps in time the two bands will choose to reissue these songs together on CD but I’m hardly holding my breath. Gripes about format aside, this EP is a mighty monster showcasing Deathspell Omega’s labyrinthine and intellectual approach to composing and playing a speedy deathened black metal. The entire work divides into sections that could be thought of as linked tracks, each section differing in speed and style of music: the DO duo (I think they’re a duo – the band is notoriously secretive about its activities, not even having a dedicated website) pull in varied influences such as post-rock, jazz improv, doom and off-tune experimentation. The drumming is a thing of wonder with rhythms and beats that the drummer thinks of off the top of his head all pushed into the track like there’s no tomorrow and the percussion makes a strong case for being the best part of the work.

While the music alternates from passages of blasting BM fury to melodic post-rock to drunken guitar wanderings with tones sliding up and down the fretboard, we shoot a look at the lyrics which contemplate metaphysical themes and the notion of a universe presided over by an uncaring God that’s much less powerful than what institutional religion has made him out to be.

An unusual scoopy rhythm appears at the 6th and 18th minutes of the track; the second time it occurs leads to a climax of extended trumpet guitar drone followed by a coda of doomy metal dominated by clean vocals.

This is an impressive effort of sustained and consistent black metal fury and hostility combined with technical intricacy.