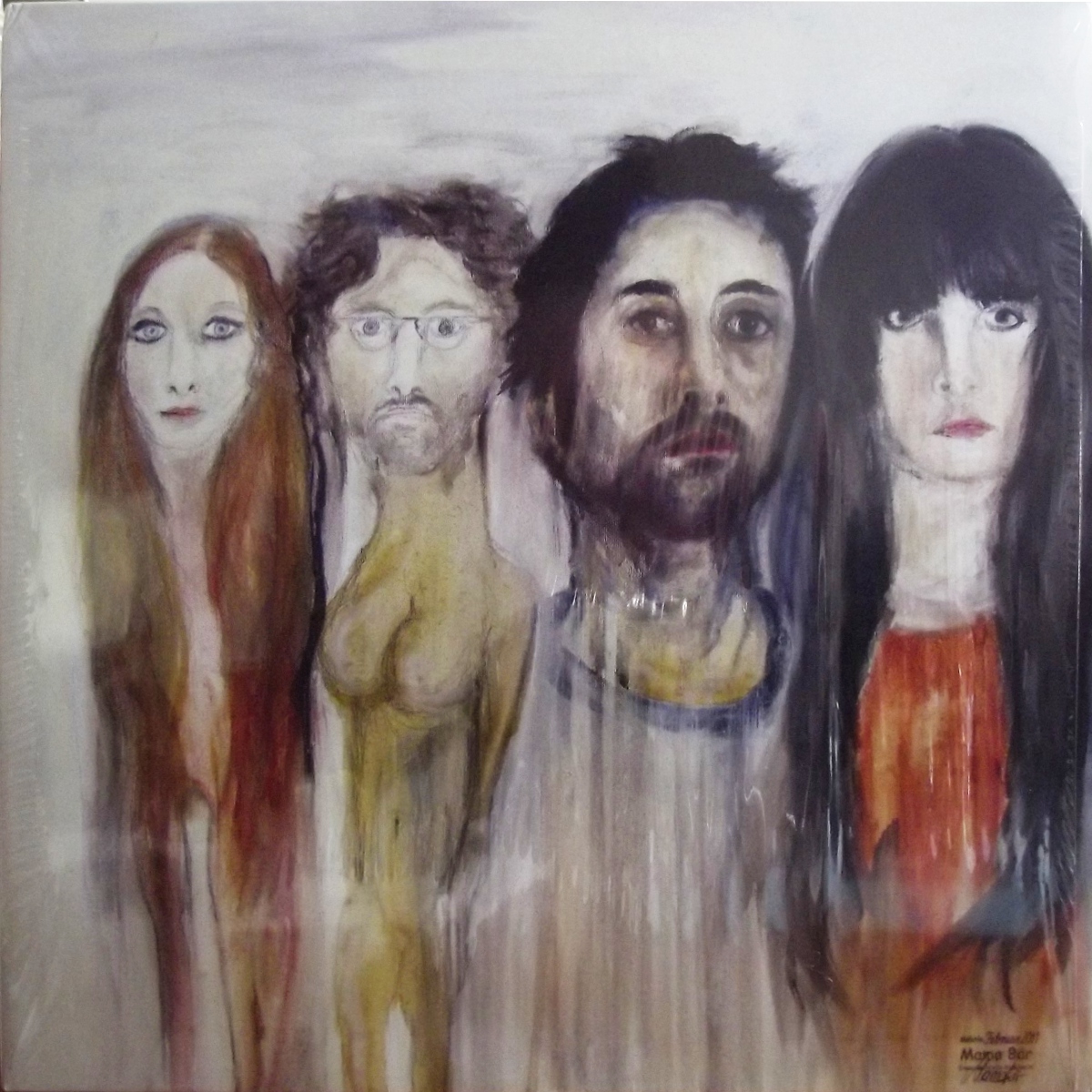 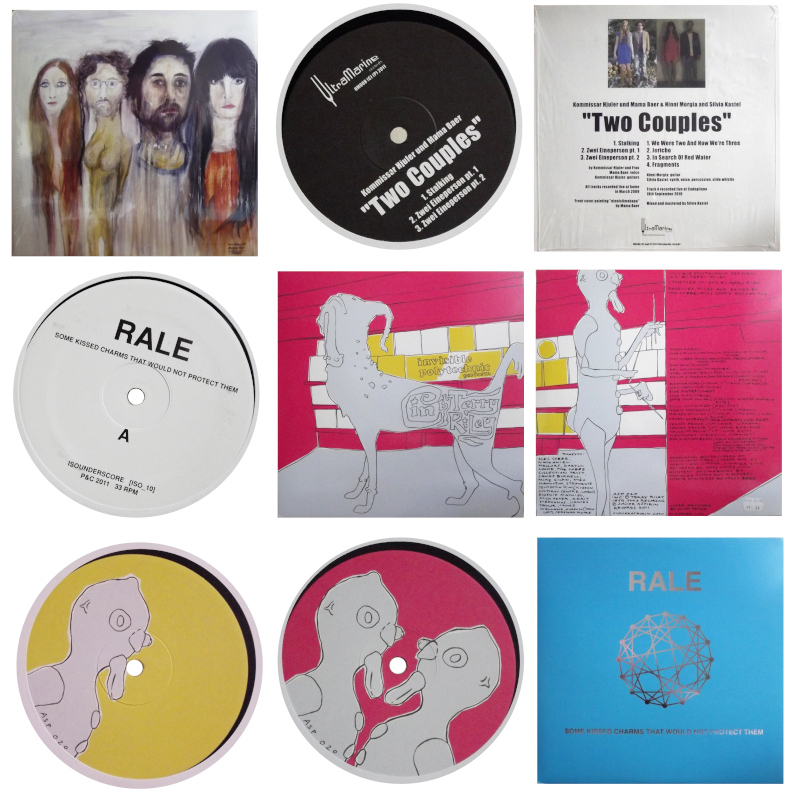 About time for me to make some inroads into the vinyl backlog…Two Couples (UM008) is a pretty far-out split LP on the Italian label Ultramarine Records. On the A side, we’ve got everyone’s favourite neo-Dada freak-a-loon misfits, Kommissar Hjuler and his partner in hi-jinks, Mama Baer. These rum European ducks are equally at home in the world of extreme fine art with their sculptures, paintings, home-made books and poetry, but they’re gaining an increasing reputation in the aural field with their odd music, sound-art and vocal recordings which have tended to exist in tiny CDR editions of five or seven copies. On their side of this plattermaroo, with recordings made at their home in 2009, the couple make with the bizarroid and eccentric squeaky voice-sqwawks that have earned them many plaudits from Monty Python fans everywhere, and also occasioned frequent visits from the men in white coats of the local bughouse. Hjuler also plays the guitar, if that’s what you can call these alien stringy-spring twangeroos that tumble out of his axe. On ‘Zwei Eineperson Pt 1’ the event sounds like a team-up between Gaye Advert and Ari Up, recorded in a backroom of the Roxy in 1978, a sort of reimagined version of punk rock arrived at by purely intuitive means. ‘Zwei Eineperson Pt 2’ is even more grotesquely delicious, where Baer’s intense and harrowing vocalising never lets up for a second; something between a painful orgasm and a difficult breech-birth is what she appears to be undergoing, but still manages to exude broken English phrases that depress the soul with their existential doubt. Hjuler’s unique guitar work also plays hob with your nerve endings, abrading your senses with sheer incompetent monotonous non-musical genius. He gets his fingers untangled by the surgeon next Tuesday. Great!

Flip this black pancake for a more refined art-fest from guitarist Ninni Morgia teamed up with Silvia Kastel, a vocalist and synth player who’s studied her trade in New York under such maestros as Pandit Pran Nath and Joan La Barbara. She also happens to be the label boss of Ultramarine. Their four tracks are evidently more studied and nuanced than the naïve and untutored approach of the Hjuler-Baer axis, but the intestinal strangeness factor is still scoring high in the red. ‘Jericho’ is a terrifying deconstruction of song form, a superb combination of vocal wailing with improvised guitar mis-shapes sinking gradually into a pool of electronic sea-spray. ‘In Search Of Red Water’ is likewise a strong blend of abstract textures and watery burblings. ‘Fragments’ exhibits some of the excess that Morgia is capable of when his ego is sufficiently stoked, and this piece begins life as a full-bodied and noisy episode of avant axe-riffing pumped up with studio echo. But things improve here when Kastel throws her Yoko Ono-esque voice warblings into the casserole dish, and a good muscular battle results. Seems the foursome did a tour of the UK in 2011 before this was released, and as you can see the LP is wrapped in a fine Sydney Nolan-esque cover painting by Mama Baer. In less than 40 minutes, prepare to have any preconceptions about vocal and guitar music thoroughly realigned and overturned.

A Night to Remember

Now for some heavy-duty minimal electronic music which arrived here 11 July 2011. Matter of fact, this one’s so dense you could use it to crush 18 African elephants and then bowl it into Paris and knock the Eiffel Tower for a loop. Some Kissed Charms That Would Not Protect Them (ISOUNDERSCORE ISO 10) is two sides of continuous monolithic droning produced with an analogue modular synth set-up manipulated with majestic control by Rale, i.e. William Hutson of California. Apart some early pauses and deep breathing exercises that begin the flow of events on side two, this is a non-stop outpouring of slow, assured and detailed textures, where every second and minute has clearly been very carefully considered, polished, and refined. Your New York school of minimalism is much more grid-like and insistent on the hard edges of its utilitarian explorations down avenues of granite. May be something in the Californian approach which, like the 1960s work of the great Pauline Oliveros, is much more natural and organic. Rale seems to be listening and thinking his way into the very grain of his waveforms. On this record, the deep blue cover embossed with a geometric design by Brandon Nickell, the composer has created a massive art monument carved from an iceberg, rendering its jagged random forms into smooth planes and straight edges with his sculpting tools. Hear that iceberg melt on side two, slowly dissolving in a meld of synth burblings and reconstituting as moisture and raindrops in the air, sea and sky.

An excellent item is the performance of Terry Riley’s In C by Invisible Polytechnic, on the LP whose full title probably ought to be Invisible Polytechnic Performs In C By Terry Riley (JUNIOR ASPIRIN RECORDS ASP 020). A chamber ensemble of English players including Tom Cobbe, Mark Pilkington, Andy Cooke and many others play strings, woodwinds, piano, percussion, synthesizer pulses, and organ, and some of the players double up as singers in the choir. No single person is credited as conductor or leader, as befits a work which I think was originally intended to represent something of a democratisation of musical performance when first realised by Riley in 1964, an open-ended framework with multiple relatively simple parts and a structure that allowed the musicians to participate in the composition of the final piece to a certain extent. By playing it, you help to create it. As you will know there have been many recorded interpretations of In C, and the underground post-hippy Canadian combo L’Infonie took the composition as a license for a considerable amount of personal musical freedom in 1970, perhaps taking one liberty too many with their multiple saxophones and trombones. By contrast, Invisible Polytechnic produce a very tight and precise rendering, with their sprightly piping style and lean, spare production of notes. It’s a very winning and bracing sound. What emerges is not only very English and polite, it’s almost Baroque in its precision; I feel Mozart or even Bach could have heard this and found a way in to the minimalist world of Terry Riley. I like the declared honesty of Invisible Polytechnic’s playing, the very clean sound, with no fudged notes or missed beats; the original recording I have on Columbia is, I seem to recall, quite diffuse in comparison. I like Mick Peter’s cover artwork here too, very good use of flat process colours and taut, sinuous lines which are a visual analogue to the playing style of the musicians, although I’m not quite sure what the animal on the front cover is telling us about the music. I must also mention one interesting touch to the record. Ben Furstenberg contributed ambient field recordings he made at Yoga Loft in San Francisco; apparently this is where the San Francisco Tape Music Centre used to exist, the exact spot where In C premiered. So I wonder if Furstenberg’s field recordings have been layered into this record, perhaps providing a ghostly backdrop for the musicians? Certainly adds an extra dimension of meaning to this fine release!