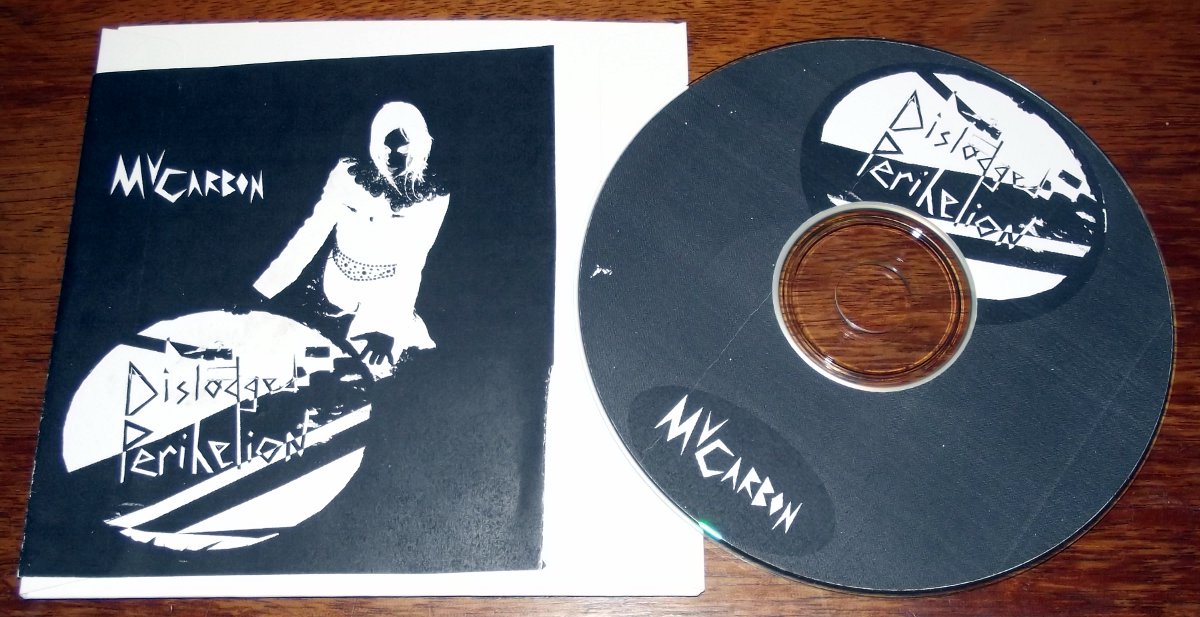 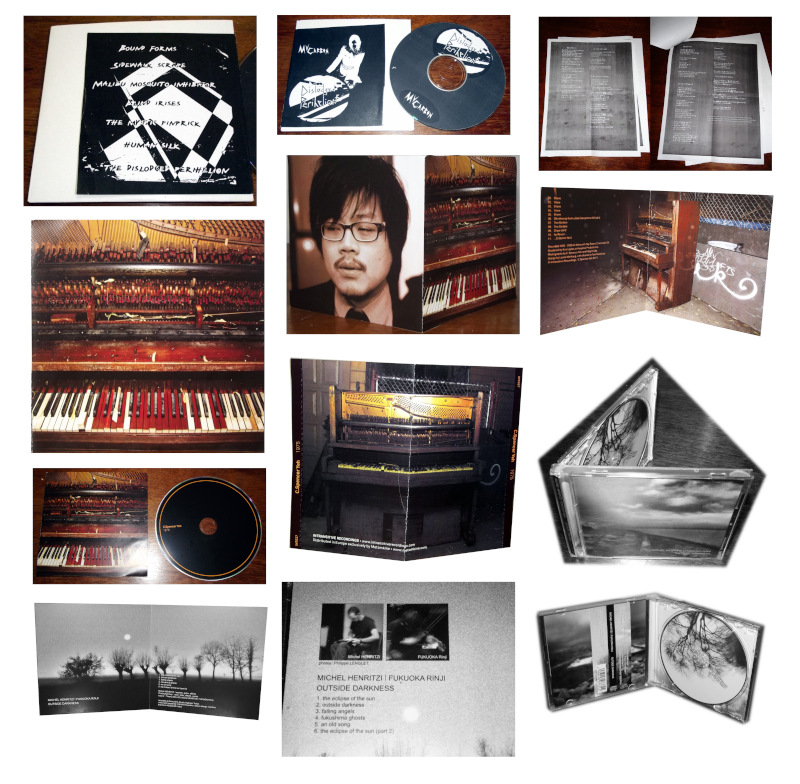 MV Carbon of Brooklyn has sent a promo CD version of her new LP Dislodged Perihelion (ECSTATIC PEACE! E#1106), which has come out on Thurston Moore’s label as a limited press vinyl item. I didn’t twig at the time when this arrived (around November 2011) but I’m now convinced this must be the same gal I saw live in 2006, when she performed as Carbon with a number of other obscure NYC noise acts on board a disused boat 1. Sure enough, six years later…she has an album out, and it’s a groovy slice of angsty distorted chaos, where the idea of conventional song-form is turned inside-out. She snarls and spits out her twisted T-bone steaks of disjointed poetry in her best alienated No Wave voice, further fed through the telephone-distortion effect from Hades, while her instrumental other self is working like a deranged many-armed Hindu deity. Matter of fact when first spun I was impressed by the near-formless layers of detritus Ms Carbon was accumulating on the grooves through imaginative use of analogue synths, the amplified cello, oscillators, cut-up field recordings and samplers, each added element pulling the project down its own particular sewer gateway like a very determined rodent or similar crawling vermin. Far from arriving as just another obnoxious table-noise slew-merchant, MV Carbon is rebuilding herself as a multi-tasking cyborg, acting as her own New Wave punk band, graffiti artist in sound, and generally ramshackle modernist composer using bric-a-brac, bricks, brickbats and bricolage. What’s most intriguing is her use of highly unconventional methods to trigger her synth and electronic signals – the press notes speak of electromagnets, heat and photo sensitive devices, and even colour recognition performing as active agents in this elaborate process. Would like to learn more about this dimension, but it might account for the very distinct and unusual sound of this LP – just teetering on the random. On today’s spin though, the dominant factor is sheer attitude – suggests strongly La Carbon has been taking night classes for a Master’s Degree in Sass, and she uses this brazen front to help fling her nihilistic, death-strewn and gory violent lyrics in your face like so much undigested pizza. Added to this, she points out her work has a “conceptual and spatially oriented” bent and she performs in art galleries, and has a long list of big-name musician collaborations to feel justly proud of. Real nice. I’ve been waiting for a vinyl copy to make it into a UK shop, but I have a feeling I’d better not hold my breath…snap one up today if you can.

Here’s another American improviser and noise genius, not unknown in NYC I trust though he comes from Cincinnati. On his new album 1975 (INTRANSITIVE RECORDINGS INT037), C. Spencer Yeh forsakes his high-energy violin attack and large-scale noise assault and offers 11 experiments in simple process-based sound. Some are basic drones, some of them stutter out random electronic gibberish like a robot frog with hiccups. Two of the tracks are made with electric guitars and create a steady magnetic hum fraught with static and white noise interruptions. So far it may sound like I’m blathering about another nondescript and inessential release of droney noise, but 1975 feels freighted with a lot more import and emotion, its solemn and serious tone indicating Yeh’s often-overlooked deep knowledge of the history of experimental music and composition. A great sadness is imparted by these forlorn, starvation-victim pieces, often resembling the ghosts or memories of music, as if the carcass of dead weight had been systematically boiled away from a symphony and left just these dry bones steaming in the cauldron. In effect, Yeh is quietly creating his own brand of “spectral” composition. His choice of photographs, showing the ruined guts of a piano in an abandoned urban area, are most apt in this context. In fact these photos show you more than you want to see, exposed keys, broken hammers, missing layers, distressed surfaces, decaying wood…if there’s such a thing as “dead piano porn”, these photos are primo material for a pervy website of that nature.

Melancholy of another sort is instilled instantly by listening to a few seconds of Outside Darkness (P.S.F. RECORDS PSFD-198), a terrific CD of performed / improvised music by Michel Henritzi and Fukuoka Rinji. The French player Henritzi has his guitars and effects, while his Japanese compadre lifts a violin to his chin in a manner fit to summon the end of the world. Together, they create music of such drama and import that most listeners will soon be reaching for new ways of saying “apocalyptic”. My favourite pieces are the two parts of ‘The Eclipse of the Sun’, the first one creating an agitated commotion at the imminent solar disaster, the second breathing a resigned sigh at the inevitably of darkness, cold and the onset of winter. In between, we have the blackened folky wail of ‘Falling Angels’ where Rinji’s odd, half-gulped vocals tell a depressing tale alongside his incessant, minor-key violin figures (John Cale fans need to check in here), and the slightly more uptempo ‘Fukushima Ghosts’ with its jangling bells and syncopated beat almost creating a tune you could dance to, if you still had some corporeal form and two crutches for your shattered legs. There’s also the layered and managed drone-noise continuum of the title track, where the duo are joined by Thierry Delles (member of extreme noise band Dustbreeders with Henritzi) and create something even conventional rock fans could dig; it’s as if all the most harrowing violin scrape and guitar swoop moments from the first Velvet Underground LP had been extracted and strung together into a harrowing eight-minute nerve-shredderfest. Michel Henritzi has worked tirelessly to promote modern Japanese music since about 2000 and though his label A Bruit Secret has ceased publishing long ago, intrigued listeners should check out what he’s doing with the Dyin’ Ghost label and his own solo guitar records. Rinji appeared on A Bruit Secret with L’Énergie De L’existence (with the great Chie Mukai) and used to be a member of Overhang Party. Right now I’d love to hear his 1996 album of violin music Searchin’ For My Layline, but that’s a £100 rarity…anyway Outside Darkness is a great release and one of the best things P.S.F. have done for a long time, a real return to genuinely disturbing and relentless rock-inflected extemporisation that seems to go on forever.