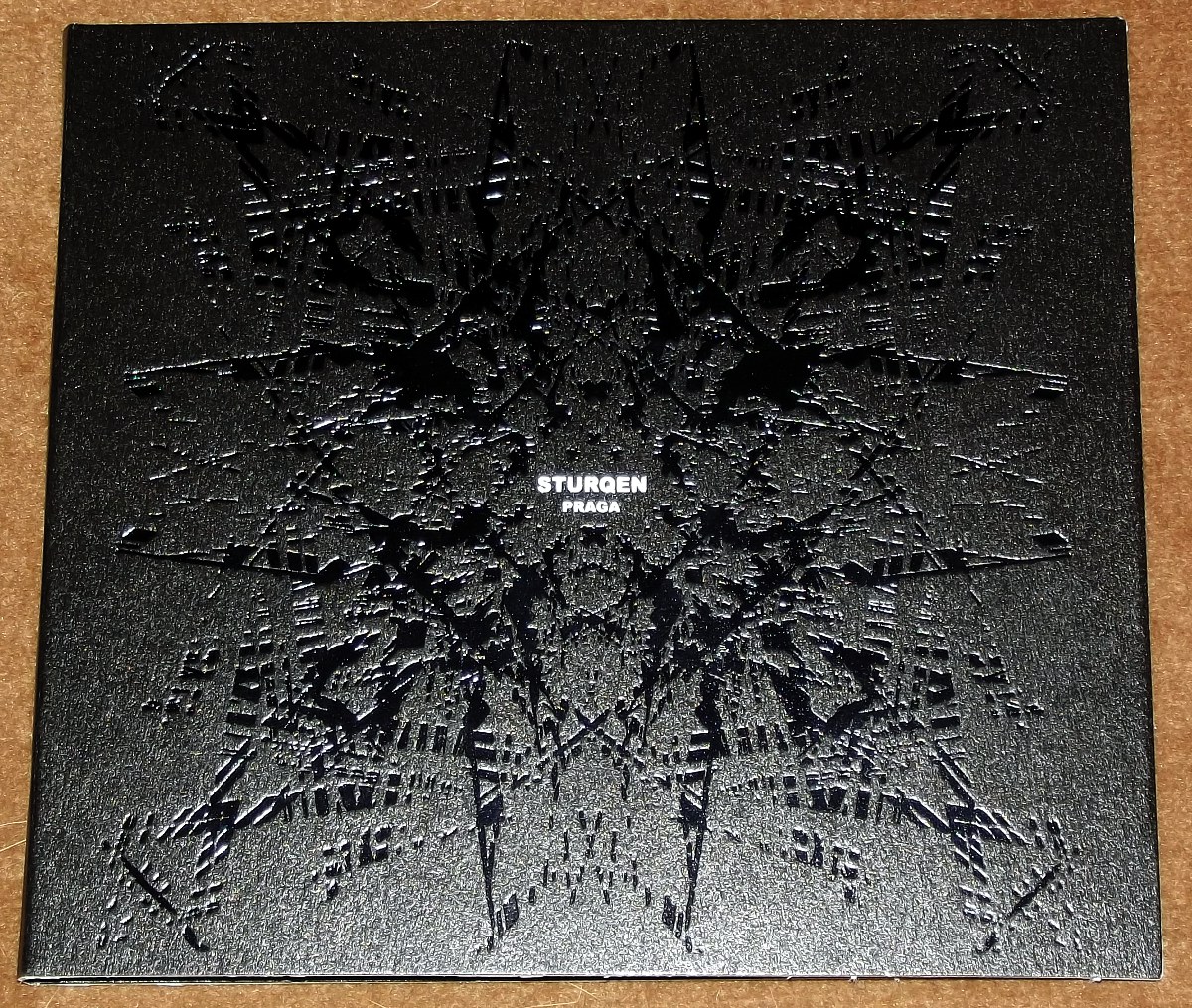 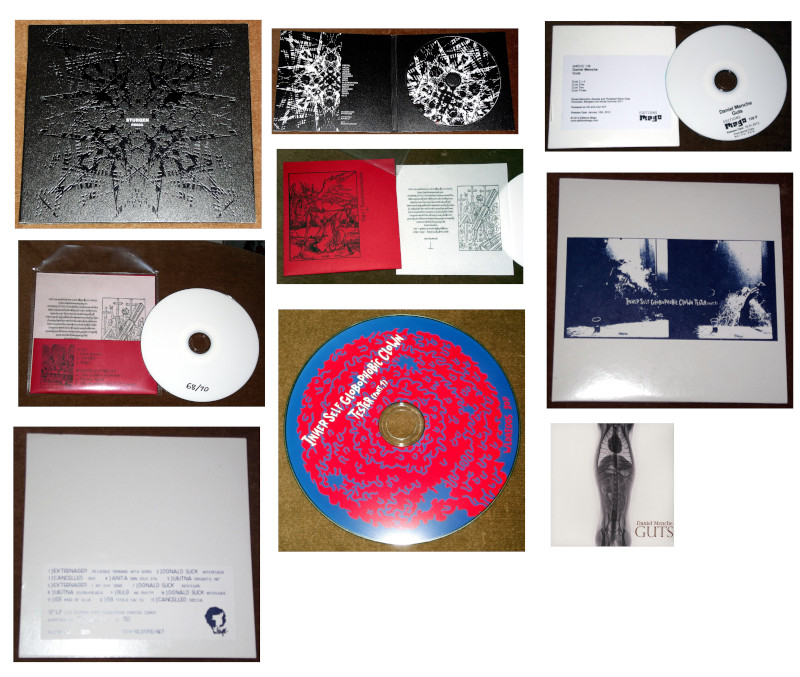 A Ukrainian release for the Portuguese duo of Sturqen, who beef up their dark electronic tones with brutally simple techno beats. Praga (KVITNU 21) may be heavy on the filters sometimes, but I like it when Rodrigues and Arantes keep their work stripped-down and shorn of any processing ornament, and try their hardest to inject passion or excitement purely by the method of dynamics and drop-outs in the mixage. Some of the short tracks, like ‘Xacal’, bypass the beat grid-system altogether and just plump for puzzling episodes of arbitrary sounds stitched together. Their music makes with a muscular and surly vibe, clearly not out to win many friends or engage directly in the expected social milieux of techno music. Nice embossed package in shades of black.

Another creator who might be considered to edge towards the “antisocial” in his music is the American Daniel Menche, who at times is the equal of Z’EV in his single-minded pursuit of remorseless process-based noise. Guts (EDITIONS MEGO EMEGO 138) was created entirely from the insides of pianos, and perhaps we should have included it with our other recent item of “dead piano porn”, not that we’re trying to start an unwholesome trend in that area. Menche goes one step further and informs us that the piano guts were “abused and thrashed”, adding an element of torture to this particular fetish, and as such it fits right in with his numerous records of martial avant-percussion music, which I can’t help but hear as bloodthirsty and pagan hymns to our animalistic urges. Where ‘Guts 2 x 4’ is an intense and almost painful listen of impossible sound, perhaps concocted from multiple layers and reprocessings, ‘Guts One’ is a dismal survey of a ruined landscape of acoustical death, where Menche the overlord is presiding over the spoils of war and the implied death of music itself as he shakes vibrating tones and mournful hums from these smashed string and wood frames. That particular track soon takes a more violent turn, planting sure feet into the sort of territory Merzbow would respect, except that Menche is doing it with mostly organic materials rather than blocks of steel. The other tracks, each around 19 minutes in length, likewise alternate between violent strikings and fiercely resonating harmonics, and the music hews between a cruel form of beauty and an abiding air of pessimistic grimness. The pianos, mutilated as they are, still seem to breath, wailing and complaining at their harsh treatment. Overall, the album arrives at the sort of startling effects that electronic musicians would give their left oscillators for, yet it gets there by electro-acoustical means. This is testament to Menche’s musical imagination, but also the fact that he’s every bit as “non-giving-up” as The Terminator T-2 robot. Exists as a double LP for those who need a vinyl edition of this assault.

A split between Sujo and Korperschwache (INAM RECORDS 087) makes perfect sense…both are strong exemplars of sonic excess in the avant-rock arena, with the latter K-Men borrowing an ounce or two of Black Metal to add to their specific compound. Sujo pours out three lambasters of loud guitar music with solemn beats, using the multiple layers and distortion that are almost the “house style” of this label. His ‘Siem Burns’ has a heroic Death Valley-styled beauty that outdoes Nadja without even trying, but ‘Paraffin’ may just win the prize with its implied streak of venom and destructiveness. Austin duo Korperschwache are conspicuously out of character with ‘The Golden Hammer’, a gorgeous meld of puzzling ambient tapes and acoustic guitar gentleness that more resembles Wooden Wand than it does Burzum, but they’re back on blackened form with ‘Divine Teeth’, a nasty snarl of metal excess where the guitar just bleats in despair in time with the dismal, stark drumming on this downer epic-song. ‘The Healing Power of Xanax’ is a treat for effects lovers; the dominant sound is just pure filtered power chords with tons of fuzz, reverb and sustain. Yet the track feels like the band are treading water for 8 minutes. I prefer this to their recent half-hearted effort on Crucial Blast (Evil Walks), but it still feels like a collection of cast-offs.

Inner Self Globophobic Clown Tester (Part One) (WILDRFID WLDRF005) is a jolly compilation LP showcasing various acts and projects on the obscure Swiss label Wildrfid. On it, we find some bafflingly odd pieces of music and collaged sound-art from Exteenager, Anita, Donald Suck, Cancelled, Uiutna, Bulb, and GB, some of whom may simply be aliases of each other (or they may all turn out to be the same person). But I’m not complaining when I hear such fun-loving examples of absurd synth pop and colourful instrumental keyboard ditties, clearly put together by people enjoying themselves and also doing so within the confines of the two-three minute pop song form. At first spin, I guess Uiutna and Anita offer the most straightforwardly “musical” outings (in a decidedly Residents-styled offbeat manner, that is), Cancelled is the most “serious” musician in the set, and Donald Suck is the joker in the pack with his deliberately silly vari-speeded concoctions that wallow in infantile glee and gurgly voices. But the whole comp is entertaining; not sure how this was overlooked for the radio show when it arrived 2-3 months ago, but we’ll be rectifying that in due course. 11 wind-up mechanical confection toys for your ears; the LP edition has a silkscreen cover.