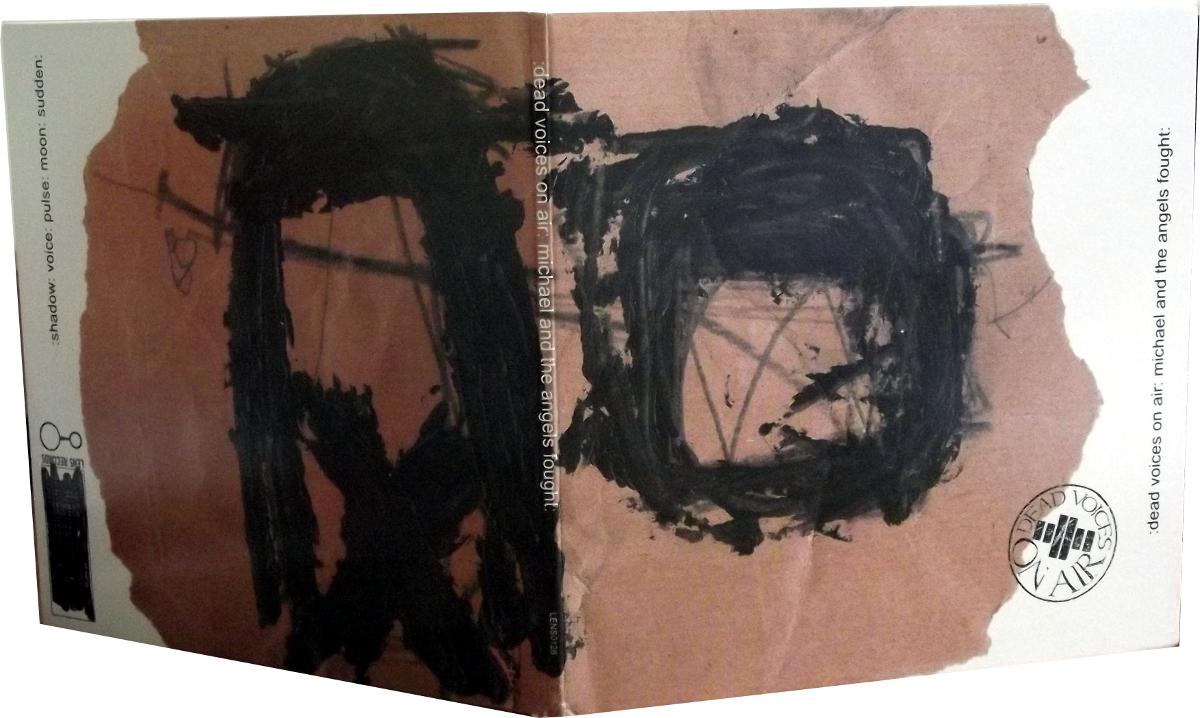 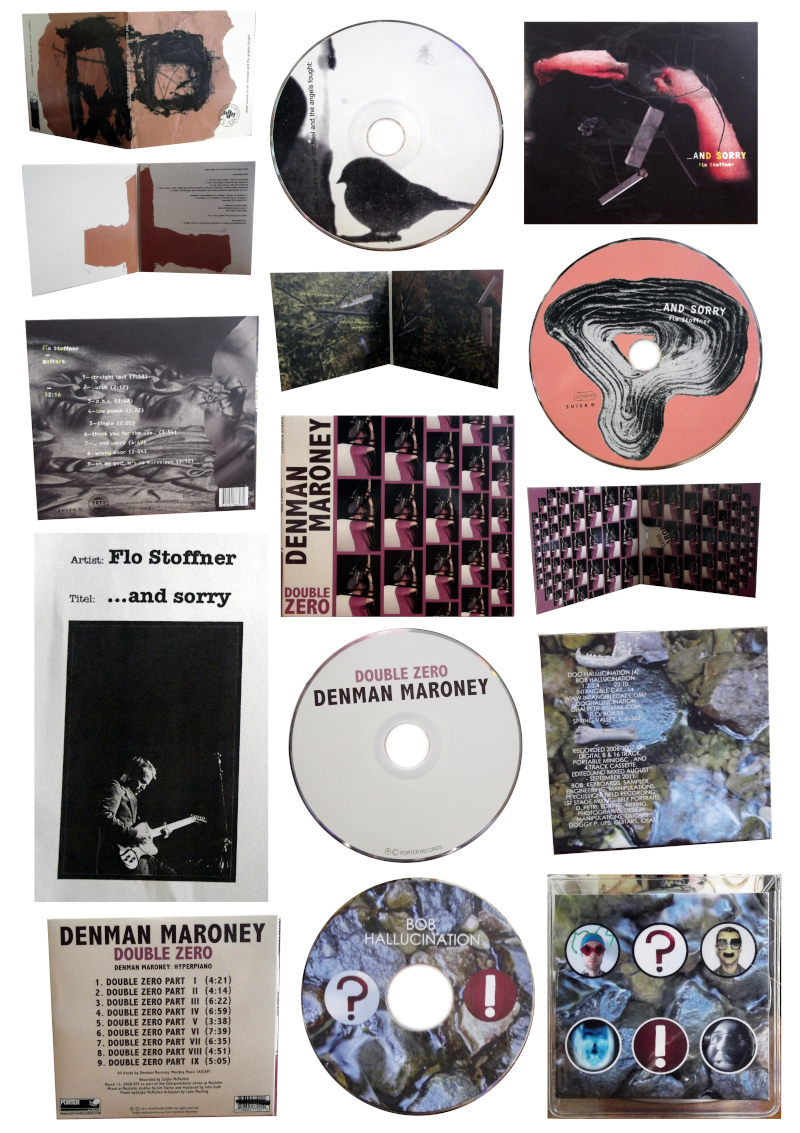 Dead Voices On Air sees the English industrial-ambient maestro Mark Spybey creating ad-hoc musical collaborations with many fine players to create the moving and sumptuous electronic symphonies on Michael And The Angels Fought (LENS RECORDS LENS0126). The keynote is a form of wistful, heart-rending introverted anguish, expressed through multiple layers of ambient wisipiness, subtle distortions, and continuous drones, and the album creates impressions of the afterlife or religious epiphany while remaining resolutely non-specific throughout. The opening ‘Shadow’ sets the tone with its elegiac cello passages played by the wonderful Bela Emerson, who restrains herself admirably – her live processing set-up is used to dissolve each note into the ether, and the music is just swept away into the sun by the elements. She plays again on ‘Pulse’, a far more ambiguous creation where she adds a certain darkness to Spybey’s rather bittersweet, longing tones, and the resultant music’s emotional range is quite complex. There’s also the 19-minute ‘Moon’ which features Philippe Petit, Michael Morton on electronics, and the mysterious Soriah adding very distinctive vocals – wordless groaning, throat-singing, overtones and whisperments which cast this particular moon-trip in a very alien hue. Soriah turns out to be Enrique Ugalde, a very colourful and charismatic Sufi / Tuvan singer. ‘Sudden’ is also of interest for the appearance of Spybey’s former bandmate Robin Storey, and with its rich layers of foggy droning it’s the track that most resembles the recorded output of Storey’s Rapoon. Mark Spybey used to be part of Zoviet France, and has been releasing music under this particular rubric since 1993.

Where Dead Voices On Air aim at subjects that are more or less external to their own experience, Swiss guitarist Flo Stoffner feels much more internalised, finding his subject matter from his own psychological states. As a player he has an accomplished technique and he explores many aspects of his avant-guitar stylings on …And Sorry (VETO-RECORDS 011), throwing what sound like very unusual chord shapes. He can be weaving an unexpected melodic patchwork piece at one moment, then next minute he’s swiping away at the fretboard with angered punk-like choppy stabs. A minimum of effects pedals are used, mostly for those times when he feels the need to sail away across an ocean of lightly droning turbulence while the bass strings add further plangent notes of uncertainty. Stoffner is also good with muffled strings, hammering-on and scrapey slide guitar effects that align his guitar work with the best of Lee Ranaldo’s solo materials. My preference is for those times when he lets himself rip in heavily-amplified, single-minded but detailed noise bursts, such as the latter half of ‘Straight Lost’, and on the entirety of ‘Thank You for the Axe…’ where he not only transforms his guitar into a malfunctioning Vox Continental organ, he also communicates a good deal about the twisted nodules residing in his brain-box for three and a half glorious minutes of tasty dissonance and angst. “Not about rockstar guitar-posing”, warns the press release, as if there were something unwholesome about rock music. This record seemed slow to grab me at first, and admittedly there is a vaguely unfinished feeling to each track, in line with the fragmented sentence of the album title, but once you can atune yourself to Flo’s idiosyncratic wavelength his music starts to make sense.

The American player Denman Maroney has arrived at a remarkably distinctive and unfamiliar signature sound through playing his “hyperpiano”, and you can hear nine astonishing examples of his craft on Double Zero (PORTER RECORDS PRCD-4063), a live recording. Maroney does not deny himself the simple pleasure of playing piano notes, but he also gets right into the body of the piano so he can pluck, scrape and bow the strings, using a collection of foreign objects including pieces of metal, plastic, rubber, and bowls. It might be said that he’s taken the idea of John Cage’s prepared piano into another dimension, pulling it out of the chilly atmosphere of the classical salon and bringing it into the realms of free improvisation, free jazz, and undertone-based composition. But the Cage comparison doesn’t really stand; I always sensed Cage was setting out to destroy the piano at some level, parodying its workings with his errantly placed screws and bolts, and deliberately attempting to ruin or undermine its natural sound as part of his anti-classical music agenda. Maroney on the other hand is exposing a rich variety of hidden timbres and voices from his piano, with his creative abundance of metallic and percussive sounds. What’s most exciting is when he can combine the two approaches, picking out a stark piano melody which isn’t far away from a slowed-down Cecil Taylor riff, while his strings are simultaneously scraping up a storm of delicious metallic noise. When we’ve gotten over the shock of his unusual sound, and the powerful sense of unrestricted freedom embodied in his very assured playing, he have to come to terms with his intelligent compositional system which involves “temporal harmony” and the “undertone series” as its basic building blocks. I don’t pretend to understand it, but one of the results is that it enables Maroney to work in several time signatures at once. This no doubt accounts for why the record is such a satisfying listen, because it has this underlying structural pattern, no matter how “out there” the surface appearance may be. A real grower which requires to be heard in its entirety, and a record I can recommend without reservation to listeners who enjoy the music of Conlon Nancarrow, Keith Tippett, and Cecil Taylor.

An enjoyable three-incher is the item by Dog Hallucination sent to us from Spring Valley Illinois and released in October 2011. More precisely, the record Bob Hallucination (INTANGIBLE CAT 14) is a collaboration between Dog Hallucination and Bob, from Headless Ballerinas Underwater; Dog Hallucination is apparently the duo of Doggy P. Lips and D Petri, who fancy themselves as a cross between The Residents and Gilbert and George with their mild sense of zaniness, their video art and performances, and their rip-roaring funny face disguises. Dog Hallucination have made three solo records before this one, all of which look intriguing and puzzling; they say they tend mostly to work with guitars as their starting point, but there’s a strong interest in electronic music and the use of field recordings. On Bob Hallucination, the strategy has been to send their guitar recordings to Bob and allow him to process the music (they prefer the term “pulverize”) through his electronic boxes, with added keyboards, field recordings and mixage. In technique at least, this is not unlike the performance method of the original Faust, who manipulated each others’ playing in real time with their boxes of effects in the early 1970s; and the finished results are not too far away from that area either, without attempting to sound self-consciously imitative of “Krautrock” as so many do these days. Sorry, do I sound unimpressed as I write this? I don’t mean to, because I like this record a lot. It may not win any prizes for startling innovation, but it’s beautiful instrumental music with a strong sense of conviction and determination, making the most of minimal loop and repetition techniques, and not coming across as over-laboured or pretentious – as organic as something grown in one of D Petri’s Petri dishes. I get the sense that editing is one of the team’s strong points, and that a lot of music has been thrown away to arrive at these four tracks of distilled loveliness. Investigate.