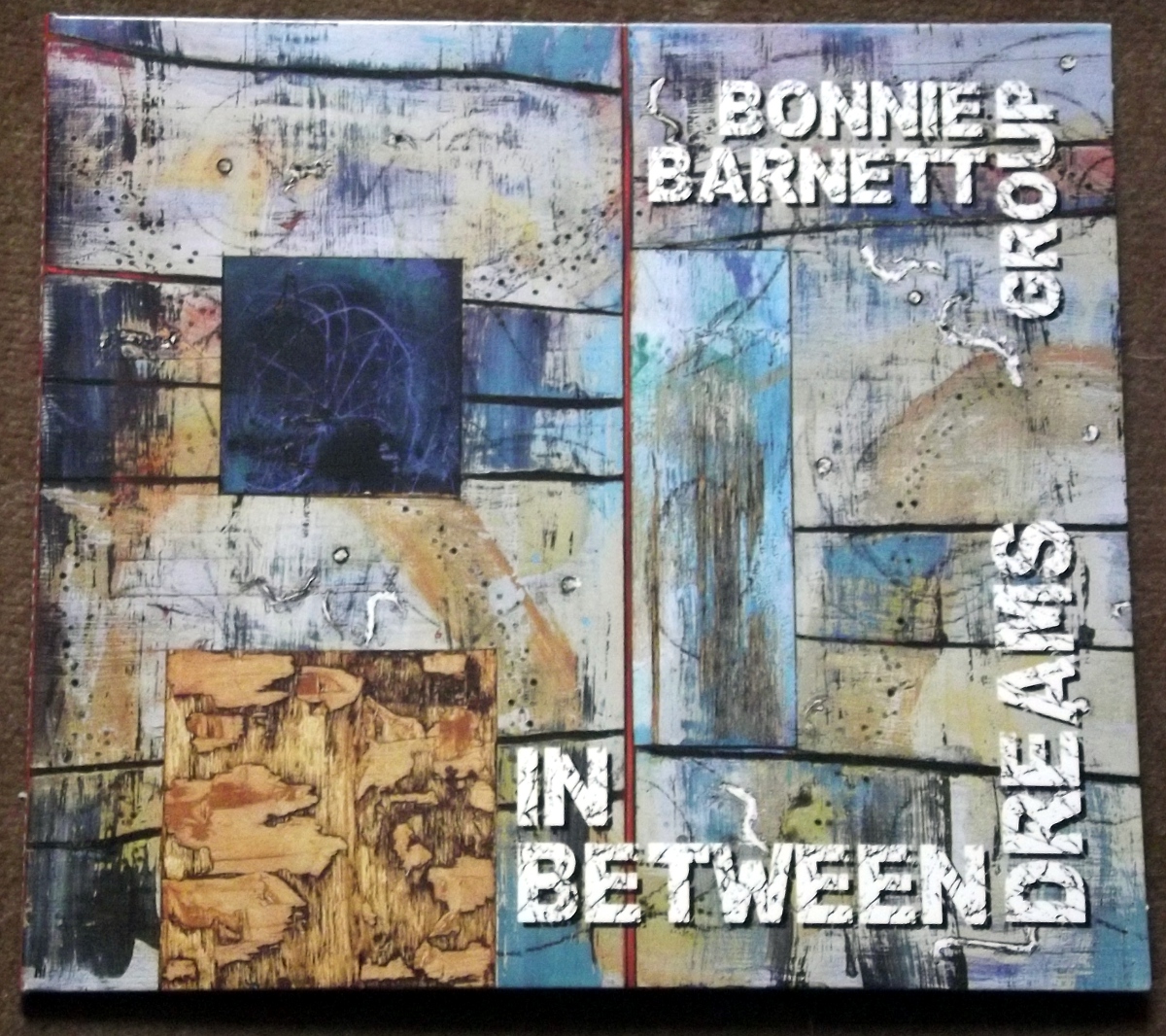 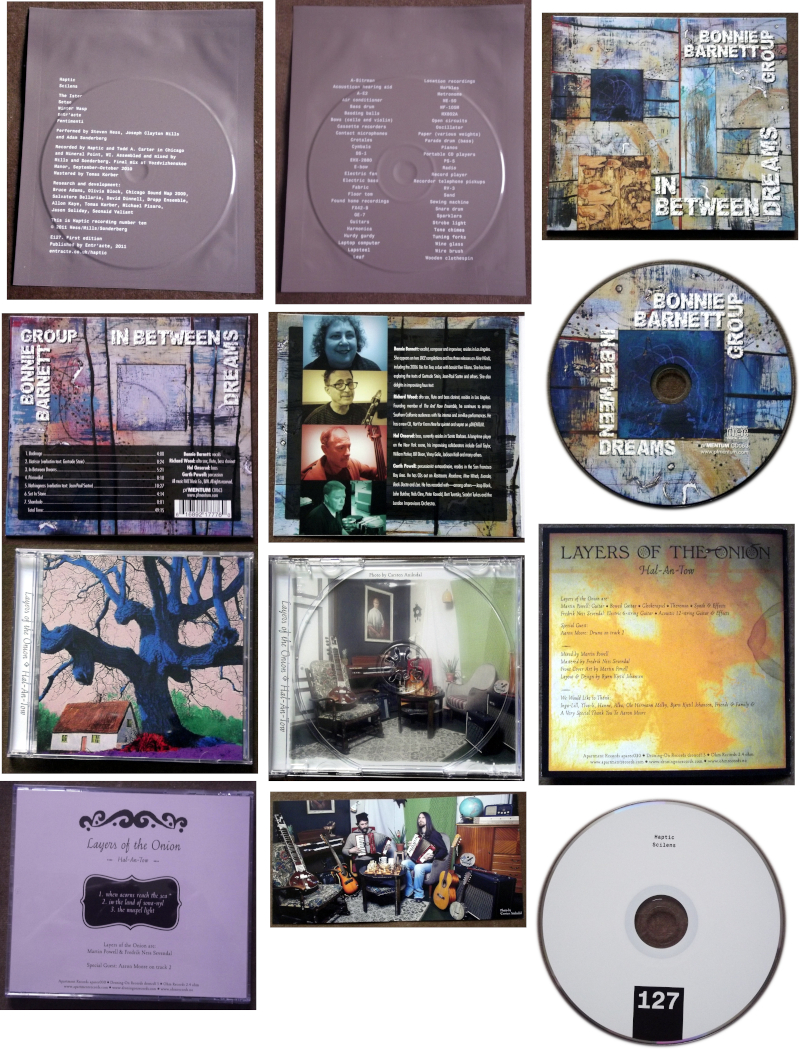 Very nice to have discovered the vocal work of Bonnie Barnett, appearing on In Between Dreams (PFMENTUM PFMCD063) as the leader of Bonnie Barnett Group. She’s an improviser and composer who lives in Los Angeles, and creates an extemporised form of vocal music which is pleasant and surprising. Not as fiercely extreme as the UK’s voice-wildman Phil Minton, nor even comparable to the trippy skitterings of Norma Winstone, she occupies her own space with these smoky wordless half-sung utterings. Quite often her genius scat-babble is as intimate and incomprehensible as the murmurings of a sleep-talker, an impression which the title may be alluding to. While Barnett is capable of doing the gymnastic workout of ultra-fast syllable delivery, by which I mean consonants delivered from a jazzy machine-gun in the mode of an avant-garde Jon Hendricks, she mostly proceeds at an unhurried pace, interlocking her vocals with the unpredictable moves of the rhythm section, that is the bassist Hal Onserud and drummer Garth Powell. The excellent Richard Wood contributes suitably oneiric and autumnal woodwind blasts with his mystery horns, and reminds us how these instruments can, in the jazz context, resemble the speech of human voices. Most of the material is abstract improvised breath-a-thons, but two tracks use actual texts; the eight-minute ‘Matisse’ which comes from the writing of Gertrude Stein, and the ten-minute ‘Nothingness’ which is based on Jean-Paul Sartre. Both of these are rapped out with stark clarity in a voice which rings with authority, every letter clearly outlined on her crystal tongue, as though Ms Barnett were a human typewriter and your ears are the big roll of paper which became On The Road. It’s like attending literature and linguistics classes at an impossibly hip college where all the professors are jazz beatniks, and you get your diploma awarded in cut-up form by Brion Gysin.

Layers Of The Onion sent us their 3-track album Hal-An-Tow (OHM RECORDS 2.4 OHM / APARTMENT RECORDS APAREC030 / DRONING-ON RECORDS DRONCD15) in December 2011. This is the duo of Norwegian Fredrik Ness Sevendal with the English player Martin Scott Powell, joined on one track by Aaron Moore from Volcano The Bear. I haven’t heard much from Sevendal since the droney electronic record Song Of Degrees he made with Bill Wood in 2003, although he’s also a member of Kobi, the Norwegian group with a fluid line-up which combines acoustic instruments with field recordings. In project name and title, this release cleverly references an album by The Incredible String Band and the traditional folk song ‘Hal-An-Tow’, performed for example by Shirley Collins and the Albion Dance Band as well as The Watersons. I don’t begrudge them that, but those two references are about all you’ll get in terms of actual folk music from this duo, unless the fauvist tinting of the cover photograph qualifies as an “acid folk” album cover. ‘When Acorns Reach The Sky’ is an acoustic guitar riff which Robin Williamson might have used for two bars of a song, but Powell and Sevendal see fit to extend it into an interminable nine-minute circular guitar drone. The tuneless abstraction of ‘The Muspel Light’ is preferable, and has no connection with folk music at all – it’s a limpid and lengthy drone perhaps produced with bowed guitars, synths, electronics and theremin, and has a natural rise-and-fall rhythm which is not displeasing. My guess is that the Norwegian half of the act was the dominant force behind this one. In between these pieces, we have ‘In The Land of Sona-Nyl’, a curious instrumental composed of instrumental layers which don’t quite fit together, a tune that isn’t quite situated in any single key, and a drum track that can’t decide whether to shuffle along with a cool jazz tempo or a slow rock beat. It follows a meandering direction in an uncertain way, which indeed characterises most of the work on this album. Layers Of The Onion create an agreeable and unusual sound and, to their credit, do so through largely acoustic methods, but beyond playing these languid and spacey jams they don’t really do enough with it for my liking.

Haptic are the trio of Chicago musicians Steven Hess, Joseph Clayton Mills and Adam Sonderberg, also associated with Dropp Ensemble and Olivia Block, among others. While this is the first time I heard them playing together, Hess is familiar to me as one half of Ural Umbo (rich occultist drone music), and Sonderberg played percussion on a fine release by Civil War. Scilens (ENTR’ACTE E127) also exists in a quite different edition as a cassette released in 2011 by the Flingco Sound System, but here it is on CD and clearly marked “First Edition”. As to the music, I am baffled by its inscrutability. Heavy bass emanations, forlorn and random piano notes, shuffling brush-work percussion, and dusty alienated drones from nameless electronic generators. Where ‘The Ister’ is rather a disjunctive exploration into these unknown territories, ‘Setae’ and ‘Winter Wasp’ are more integrated drone pieces, with a very solid and tangible presence to the thick humming sound. Yet so far everything seems stark, cold and almost inhuman, music of great doubtfulness delivered by shadowy men with stern faces and beetling brows. ‘Pentimenti’ leads us even further into the maze of cold storage units and malfunctioning walkie-talkies, and it’s like taking a walk through an icy wasteland which alternates with a deep-freeze meat locker. Simultaneously, there’s too much space and not enough, creating a delicious combination of claustrophobia and agoraphobia in one handy thirteen-minute dose. Lastly there’s ‘Secret Track’, a 20-minute chiller which you won’t find on the cassette version, and it’s an exercise in sub-zero tension, its menacingly near-silent murmurs and gently purring layers preparing the listener to expect the worst at any moment. Quite remarkable industrial-minimalist music, and commendable for the fact that I sense it’s mostly created in real time by performing musicians, without over-much reliance on processes, effects, or machinery.