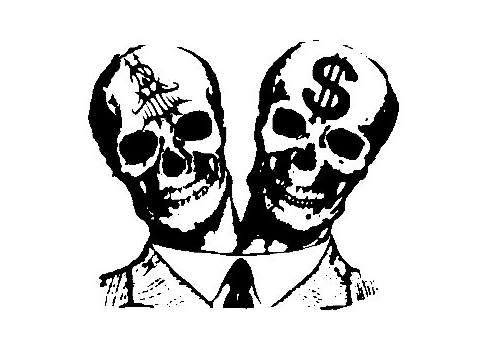 It had to happen one day: an album where Whitehouse-styled power electronics meets black metal. I wasn’t all that surprised on coming across this recording. Somehow I felt that my primitive unconscious mind had sent a message into the ether ages ago, saying when is there gonna be a power electronics / black metal record? and somebody answered the call. This someone turned out to be a duo, NRIII, who have combined their love of both power electronics noise and grim black metal into a tirade against modern capitalist society, how it enslaves people and turns them into soulless robots whose lives are ruled by the demands of technology and of our political / social / economic elites. Solus Patior is not a very long album but it is highly oppressive and claustrophobic, full of repressed fury and tension; it has the creepy, compressed feel of a very early Whitehouse album I used to have years ago, New Britain I think it was.

The music throughout the CD is clearly power electronics noise, often no more than strips of rhythm or chaotic keyboard or electronics effects laid one over the other while a crabby black metal voice rages through a thick layer of distortion. The opener “Delicious” is the longest: lines of deranged pointillist electronic tone effects dominate the piece up to about halfway through, after which a shower of fine dust takes over the rest of the track. Track 8 “Occupation” is notable for its skronky crazy jazz saxophone melody (or non-melody as it were) laid over noise drones and a trumpet-like grind in the background. Most tracks are full-on noise oppression but a few like “Factory” and “Underground” are quietly grim as though brimming with repressed anger or desolation and these might suggest anomie – an extreme feeling of being atomised and cut off from others – felt by workers in capitalist society.

All tracks are quite good though some appear unfinished or underdone and might benefit from a longer playing time in which the rhythms and any potentially repetitive elements could get a work-out and give the music a more rounded, less one-dimensional presence. Particular noises and drones could have been stretched to their sonic extreme. As it is though, Solus Patior is a good introduction to a new act and a new form of black metal fusion.