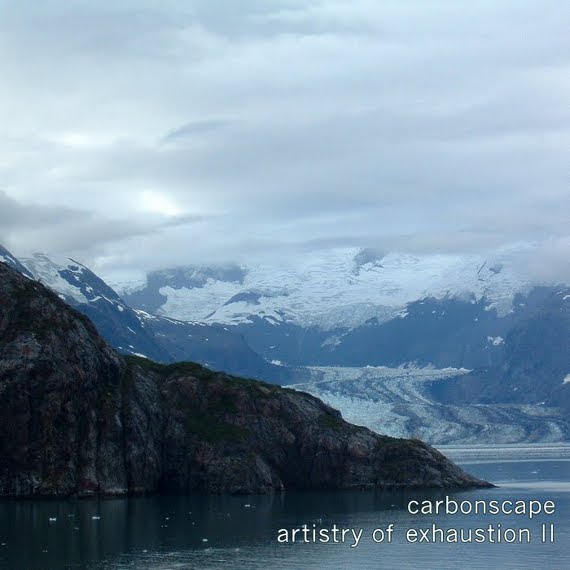 Carbonscape, the ambient twin of black metal act Petrychor, has three digital albums available for downloading from its website and Artistry of Exhaustion II, the companion piece to Effigies and Epitaphs is quite a beautiful one to hear. The idea of the album is to take small trickles and drops of sound and to blow them up into huge grinding glaciers of ice and rock. The recording consists of two tracks averaging 13 minutes each.

First track “When Autumn Comes I’d Like to Die” starts with pouring rain and a whispering ghost-like atmosphere. A quivering piano melody develops slowly over this layered background. Yearning, ghostly female voices sigh in the far distance. As the piece advances, the sound textures become sharper and louder (though never raucous nor distorted) and one has the impression of a huge spacious white world of sharp ice crystals coming into being in one’s mind. The air feels cold and on edge and breathing almost hurts your lungs. The sound ebbs and flows and tiny noise particles of ice and wind can be heard clearly in the whirling ghostly presence. This track has to be heard very loudly for the full effect of those jagged shears of drone to be felt.

“Black in Deep Red” is a slightly longer track, more conventional in sound and feel, with pretty washes of piano and synthesiser spreading over an industrial rhythm that suggests a steam train chugging through the track. Field recordings of night insects, scraping metal sounds and mysterious chanting voices that appear to echo endlessly add mystery and wonder. Again, due to the ebb and flow of the sound, the volume level on this track has to be set high so that its dynamics can be fully appreciated. The edges of the drones can be very sharp and that scraping metal tool noise has me a little worried: is a sharp knife being whetted and should I start running? As the track progresses, it adopts a heavenly choral drone and the music’s texture starts to sound quite rich and lush.

This recording is very impressive in its layers of sound and the effect of sumptuous richness the tracks achieve. Both are equally good but “When Autumn comes …” has the edge on the other track as it sounds so desolate, so wraith-like and so majestic. I for one hope that some time in the future when Effigies and Epitaphs might be reprinted or Petrychor signs to a bigger label with more resources, that that black metal album might include a disc of Artistry of Exhaustion II – the tracks need not be exactly the same as I heard on Carbonscape’s website but their atmospheres and moods should survive the transfer from website to disc.