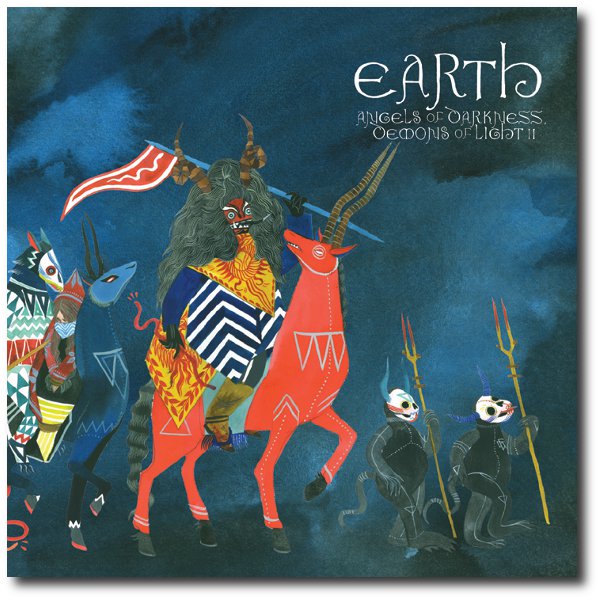 Following its predecessor of the same title, this album continues the style of that other recording: quiet, laconic and minimal in expression yet seeming to say much more than it actually does. The mood is dark and gravid with foreboding in early tracks and admits melancholy and nostalgia for perhaps simpler and more straightforward times in later pieces. On this recording, the Earth core of Dylan Carlson and Adrienne Davies is reunited with cellist Lori Goldston and bassist Karl Blau; I have the impression this will be the last time these four musicians will play as Earth as already Carlson has been reported to have expressed interest in English and Scottish folk music and may pursue that direction in later Earth or solo recordings.

Early pieces “Sigil of Brass” and “His Teeth did Brightly Shine” seem lazy and simple, and feature almost abstract dapples of guitar tone and stark string melodies respectively against a sombre atmosphere as backdrop. The mood is very concentrated and intense. Yes, the music may be repetitive but the intent is to immerse you in the music and the universe it’s drawing up around you, the tones and melodies painting the details of the dark cosmos that will envelop you.

“A Multiplicity of Doors” brings in Davies’s sparing and hushed percussion and introduces Goldston’s mournful cello accompaniment to Carlson’s guitar, the two falling into a slow and stately dance. The cello seems to add a smoky feel to the music and there’s a definite epic movie-soundtrack vibe that makes you think this album would be just perfect for a film based on one of US writer Cormac MacCarthy’s novels. The musicians build up the track very slowly as if in a soporific trance, gently casting a veil of hot, dry desert atmosphere over you. As the track progresses, the cello’s melody just manages to stay on the right side of being deranged – but only just! – as the musicians navigate through a sequence of bluesy notes and the occasional slightly flattened key and appear to go over the same path and pass the same mesas and buttes in the desert along the way. I swear the band’s sound becomes fuller and more three-dimensional but that could be my mind playing tricks on me.

“The Corascene Dog” has a pleasant enough melody but compared to what’s gone by and what’s to come suffers as a filler track that gives a bit of respite between heavyweights. It’s quite bright and has a hopeful ambience in places. Outro track “The Rakehell” has a strong, moody retro-1970s feel with Blau’s bass guitar playing around the edges of Carlson’s guitar and Davies’s drums cranking out the main repetitive riff loop. Frail strings of lead guitar in the background add depth and textural variation to the track.

It’s not necessary to know the previous “Angels of Darkness …” album; this follow-up is actually a better work than the first in my opinion. The music insistently pulls you into its interior world and once there, you marvel at the wide open spaces and moods of the tough, dry landscapes around you. The intense and concentrated emotion of the music may surprise you.