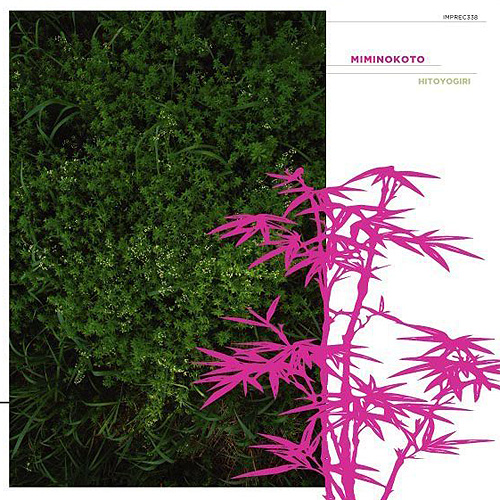 Featuring the kind of bleak, dark noisy psychedelic blues that I usually expect from the PSF Records guy, Miminokoto’s “Hitoyogiri” maintains Japanese psych-guitar rock’s strangle-hold on my fragile psyche. Generally the music on this CD is melancholy and wistful, or at the very least has a dark, inward ambience with steady low-key vocals that rarely become very emotional plus a blues-tinged guitar that may have a darkly sparkling tone and drumming that starts off quiet and steady and eventually erupts into virtuosic playing. A couple of  tracks feature cloudbursts of searing distorted lead guitar and these songs will be the highlights of the album for many listeners including me.

The title track sets the pattern or template if you like for the songs to follow: the start of the song is just barely there and what develops is a repetitive rhythm that more or less continues for the duration of the track with some variations, usually those that turn on a change of key. Vocals begin quietly and are almost inaudible but become louder, a bit more emphatic, as the music progresses. The song becomes more free-form and near the end, it’s become chaotic with blurry, distorted lead guitar tones and quite complex, improvised drumming. “Midsummer’s End” follows the pattern but with a sparkling blues guitar melody.

The next couple of tracks see the Miminokoto men hit their stride: “Hands of the Night” features some really wistful, beautiful romantic melodies with the bassline following a different inspiration from the rest of the music. There’s a flubby wah-wah sound inter-twined with the pleasant bass-guitar melody. Rhythm guitar tones can be very resonant. “For Garbanzo” has a plodding riff but the lead guitar breaks are what really make this album stand out: streams and streams of fuzzed-up guitar noise pour out of the speakers and fill up the space in your head until your eyes see colourful bright day-glo pin-pricks twinkling and dancing up and down in revolving concentric circles that themselves perform their own little square dance routines and form all kinds of strange geometric optical illusions that are usually featured only on Japanese psychologist and optical illusions buff Akiyoshi Kitaoka’s website.

“Milky Light” is a faithful cover of the Kousokuya song, right down to the anguished vocals. Only the blurry lead guitar break-outs indicate that this is Miminokoto and not that doomy band whose leader Jutok Kaneko is, alas, no longer on this sad plane of existence. After this song, Miminokoto return to their familiar territory of minimal-sounding, bluesy psych-rock for a final hurrah but “Trembling Tongue” seems strangely inadequate after what we’ve just heard – proof if needed that nothing, not even the M guys, can quite match Kousokuya in the Department of Dark Despair.

Good if perhaps not very inspired with strong blues influences, some fired-up noise guitar and a great sparkling, bewitching sound, Miminokoto serves up almost (but not quite) easy-listening psych-rock. I can certainly recommend this album as a beginner’s guide to this particular Japanese-owned genre.