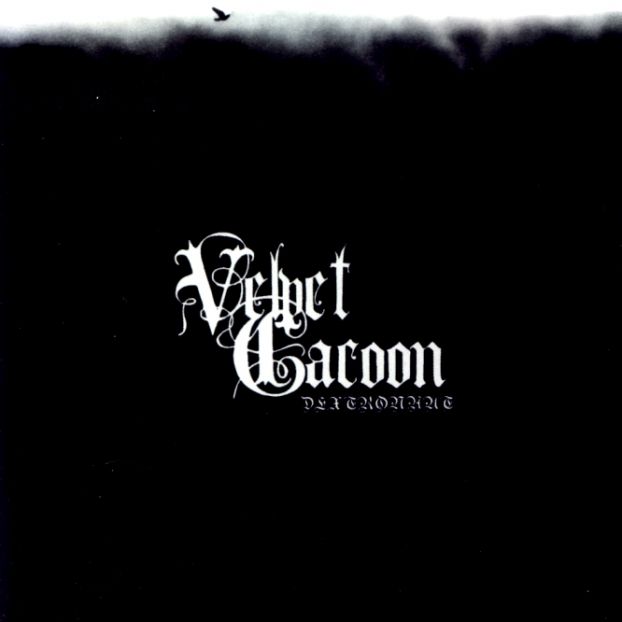 The version of Velvet Cacoon’s first album under review is the one released by Khrysanthoney in 2010 which features the original 9 tracks plus an extra song “When the Purest Flesh is Alive in a Heart Full of Hate”. Apart from the cold and spooky ambient intro “Bloodletting” and track 9, “World Untouched by Mankind”, an uninteresting ambient synth throw-away, the debut album is straightforward melodic black metal going full tilt with a buzzy sheen and a crabby, crackly vocal gabbling in the background behind all the fuzz. The structures of the songs are basic, reliant on repetition of riffs and melodies, and using monotonous rhythms and beats. The guitars can be so fuzzy that the effect sounds like extra-loud white noise static but it has a very sharp edge so that if you turn the volume level up high enough, you can almost detect each individual little sonic needle-sharp vibration event pinging away in the buzz.

Not much here portends the trance-like, dreamy droney noise creature VC became: the music suggests a lot of early Norwegian BM influence like Burzum. The singing is almost akin to the cartoon Donald Duck style of Striborg’s Sin-Nanna though it’s not so saturated in reverb as the Australian’s is. The album chugs along steadily until we reach the halfway point where the music lifts its game with a speedy Burzum-like piece “Setting off the Twilights”, followed by a sometimes-blistering / sometimes-stately and always abrasive “A Year of Decembers” and the equally schizoid “Reverie”. All these are good tracks though “Reverie” probably could have done without that terrier-barking arff-arff lyric that occurs a few times. “Starlit Seas of Angel Blood” is frenzied and furious, and features a mix of otherwise basic rhythms at different speeds that make for an interesting and varied song.

A likeable album though not really very remarkable or standing out from most other wannabe Burzum pretenders apart from those four tracks mentioned above which could have been hived off into a mini-album or EP. Those songs demonstrate that VC had a flair for writing distinctive and even deranged melodic BM pop ditties which didn’t always carry over to later albums. The post-VC creation Clair Cassis revives the melodic pop bent in its self-titled debut so that tendency was never lost. I wonder if VC could have had a higher musical profile if they had continued and maintained a recognisable pop-oriented BM edge along with the more amorphous blurry ambient music; the band might still be with us today, not needing to resort to the stunts and stories that backfired on them.