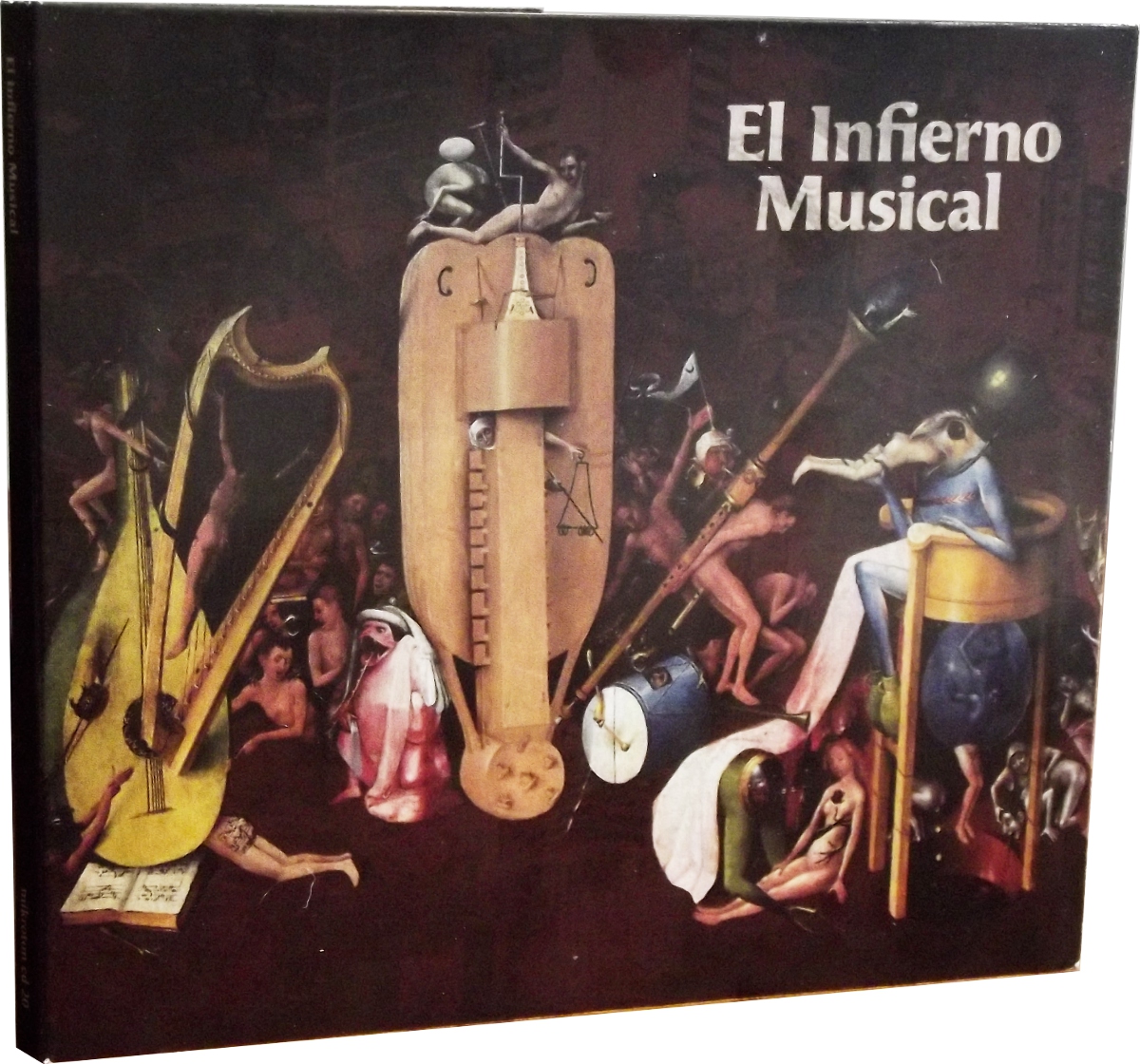 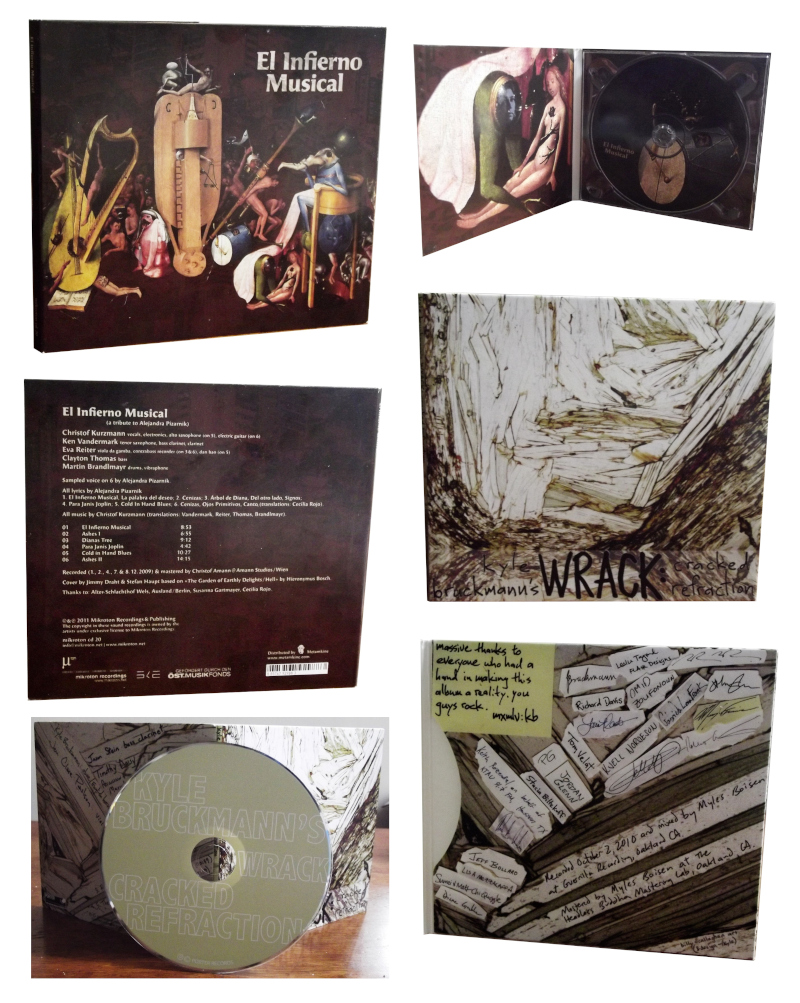 Orpheus in the Underworld

Christof Kurzmann attempts grand things on El Infierno Musical (MIKROTON RECORDINGS CD 20). He composed all the music, plays electronics, saxophone and guitar, and sings all the lyrics where they appear; these words were written by the Argentine poet Alejandra Pizarnik, and translated into English with the help of Cecilia Rojo. The aural experience is rich – an unpredictable melange of jazz, free jazz, improvisation, chamber music, blues, pop music and rock music, sometimes given a vaguely medieval / Renaissance flavour by the viola da gamba playing of Eva Reiter, who also plays the contrabass recorder on a couple of tracks. Plus the whole package is contextualised with images sampled from the “Hell” panel of Bosch’s famous Garden of Earthly Delights triptych.

Many musicians may have commented on, been struck by or even dreamed of making a concept album about this “musical Hell” proposed by Bosch, where sinners are punished in amongst a ghastly cacophony of archaic musical instruments, some of which are changed by the diabolical agency into engines of torture. I should point out that Kurzmann is not explicitly intending to do any of the above either, and only the title of this suite has any consonance with the Bosch painting, of which we see a Photoshopped variant provided by the visual artists Jimmy Draht and Stefan Haupt. The main aim of the work is to pay tribute to the poetess Pizarnik, a collection of whose writings also appeared under the title El Infierno Musical and indeed prompted Kurzmann, who purchased said volume almost by accident from a street seller while drinking coffee in Buenos Aires, to found the quintet of this name in 2008.

Musically this album is strong and convincing, even if not as chaotic as anything with a Bosch cover ought to be, and while the individual players – e.g. saxman Ken Vandermark, drummer Martin Brandlmayr – perform with authority, I sometimes find the package a shade too mannered and contrived for my tastes. Kurzmann is the sort of musical catholic who has no problem in mixing different vernaculars, styles and genres in his musical statements, often doing so in the same breath, if he decides that’s what is called for. The main stumbling block for me is Kuzmann’s rather effete voice, which recites rather than sings the lyrical content, and always sounds breathless or on the verge of tears as he negotiates another corny-sounding flattened fifth. So far this prevents me from reaching the core meaning of the work, which is probably encoded more into the poetry than in the music. Still, one needs to persevere with work of this complexity and depth. Don’t let my meagre prejudices prevent you from hearing this extremely unusual and distinctive piece of work. This arrived 31 January from a label based in Moscow.

Leave not a Wrack Behind

Cracked Refraction (PORTER RECORDS PRCD 4061) played by Kyle Bruckmann’s Wrack, is a pleasant surprise and tremendous piece of composed-jazz-classical music, with its multiple feet planted in many fertile territories. I thought I must have some solo Bruckmann albums somewhere in the TSP archive, but it seems I only know the work of this oboist and French horn player from his contributions to other ensembles – such as those of Olivia Block, Scott Fields, and Jason Ajemian. Here are seven fascinating instrumental pieces recorded in 2010 and performed with a small group which performs the considerable feat of sounding as rich as a whole orchestra; they are Jason Stein on the bass clarinet, Jen Clare Paulson on viola, drummer Timothy Daisy and bassist Anton Hatwich. Maybe it’s Myles Boisen’s skills in the production department that help make this such a crisp and bright recording, but the players are on fire. Just two tracks in and I’m already delighted with the mixed chords of ‘Exacerbator’, whose bittersweet harmonies remind me of a slightly darker Gil Evans, or some of the more mysterious moments of Ornette’s Skies Of America. Then there’s ‘Notwithstanding’, where Bruckmann’s oboe trips its way as gracefully as a long-legged stork as it negotiates the tricky time signatures. The tiny miracle of this one is how the entire pace of the piece is quickly pulled off-course by the slower tempo of the viola, which subsequently pulls the bass and drums under her unfolding wings and they demonstrate new feats of restraint as they pluck their skeletal notes under a starlit nocturnal sky.

Those joyous opening cuts are almost something you could sing along or dance to. By the time we get to ‘Ratchetforms’ however, I’m beginning to see what liner notes writer Bill Meyer is going on about with his articulations of the phrase ‘Cracked Refractions’. “Improvisers are vandals who crack music apart, and make something new out of the parts,” he asserts, after naming a list of credible precedents in that area. ‘Ratchetforms’ may be bitty, but it’s not disjointed; you can almost hear the gears of Bruckmann’s mind creating a sort of gigantic wooden clock on the soundstage. Plenty more aural joys and delights to come; the plangent woodwind and viola sounds on ‘Fair To Middling’ are enough to make a blackbird weep into its own nest, and the high-energy forthrightness of ‘The Dishevelator’ gives an indication of a direction Frank Zappa could have taken around the time of Burnt Weeny Sandwich, with its wonderfully complex interweaving melody lines played against a steady rock-like beat with plenty of space for Stein to blow his grumbly-tootly notes in a manner that brings much pleasure to the heart of this confirmed Dolphy fan.

While I could easily point to a number of “third stream” (if that’s still the right word) ensembles whose members all love to be clever and complex and let you know it at all times, one of the many pleasures of this album for me is how Bruckmann and his team make playing this music seem effortless, fun, and 100% natural, never neglecting the swing in favour of flashing their musical chops. In short as Kyle’s thank-you note so aptly puts it, “you guys rock”. Arrived in the TSP mailbox on 30 January 2012.