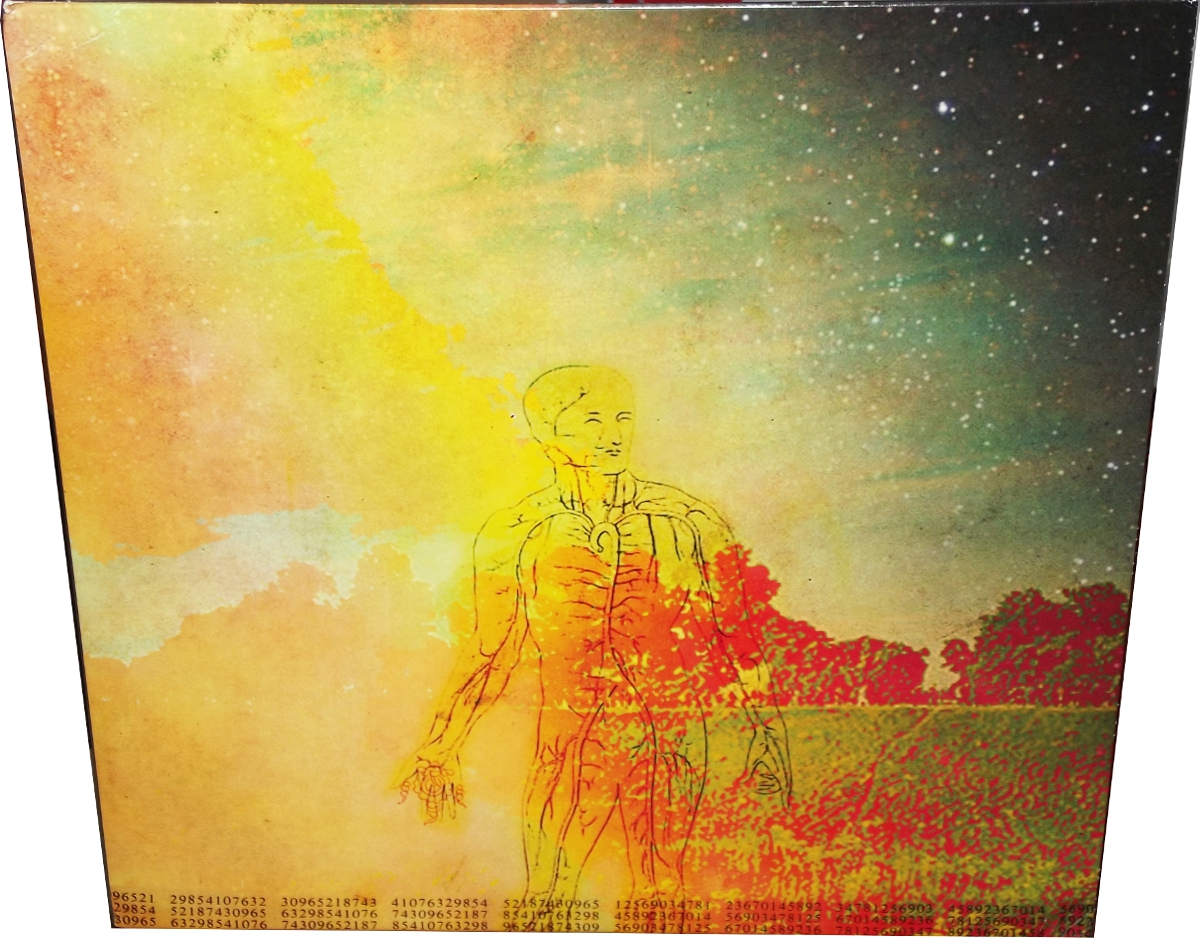 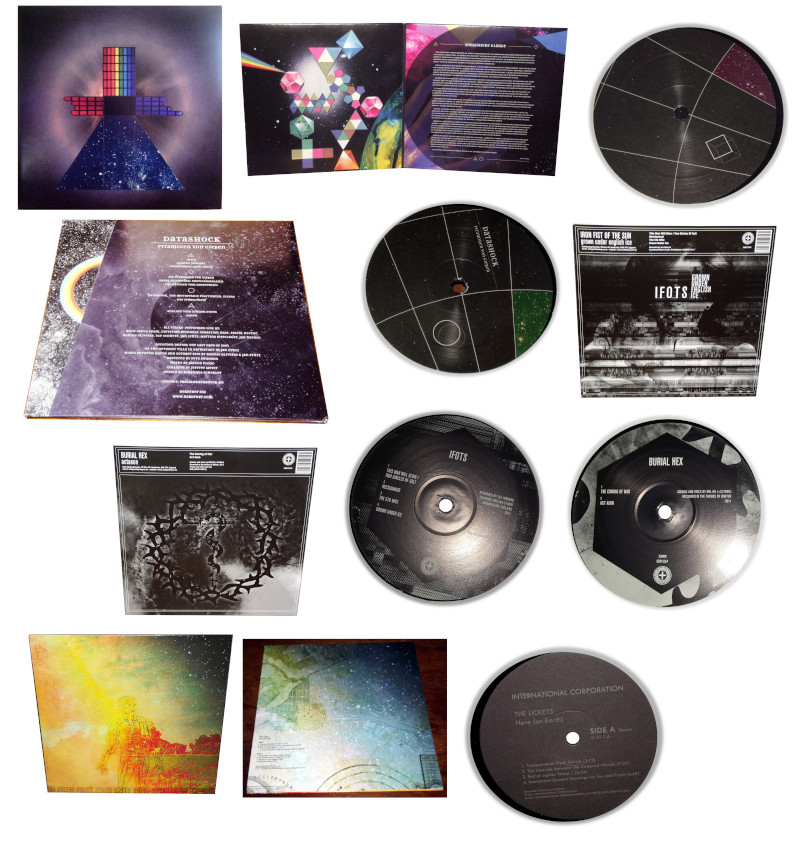 After many CD releases, The Lickets finally made a vinyl LP. Here (on Earth) (INTERNATIONAL CORPORATION IC-011-A) contains just eight tunes with titles which speculate on the cosmos and its heavenly bodies, for all the world reading like chapter headings from a cosmological treatise by Robert Fludd or Paracelsus. Indeed all of its Renaissance science leanings can be discerned in the mystical cover art, which superimposes an anatomical human frame on top of a treated vista which combines pink-yellow clouds, the night sky, and the parched red trees of another planet. The strings of numbers at the base of this image confirm that The Lickets do not intend to ignore computer science in their world-view. Meanwhile the back cover is finding centres of psychic energy at various points on a city map, or a more general aerial view of our planet (more superimposed stars). Or perhaps these concentric circles indicate landing sites for extraterrestrial visitors. I find the sleeve more interesting than the music hereon, which while not at all unpleasant is not very challenging either. Simple major chords and slow arpeggios are strung out across rather uneventful, dreamy and near-ambient fields of syrup. The Lickets have tremendous control over their sound production and have developed a very polished and professional finish to their lushly-textured work, but compared to the days of 2005 when they made Fake Universe Man and produced lively, danceable instances of bizarre supermarket electro-pop, they seem to have less to say, in spite of all their advanced technique and studio-wise ability. This San Francisco combo used to keep a very low profile and their releases arrived with propaganda from their label pretending that the band didn’t even exist, and that International Corporation was in fact an entertainment conglomerate bent on taking over the world through music. Matter of fact that tactic was what appealed to me in the first place (similar strategy to The Residents, or Sudden Sway when they signed to a subsidiary of Warners). Released in 2011.

The item from Cold Spring Records is a split LP (CSR153LP) between Iron Fist Of The Sun and Burial Hex, and it’s quite a shocker. IFOTS‘s side is Grown Under English Ice, and it’s all the work of Brummie man Lee Howard, who’s been making records for about five years; Jennifer has already noted his one-take, icy nihilism (and an apparent fixation on Princess Di). As title indicates, this is a freezing cold and wintry work which is thoroughly steeped in a desperation and misanthropy that is peculiarly English, and to his credit Howard makes no concessions to international listeners, bellowing his unintelligible chants of hatred in a strong English accent. His remarkable yelling vocal style is his strongest point, particularly on ‘This Man Will Glow / Two Circles of Salt’, where he appears imprisoned in a living Hell with palpably thick walls of concrete. As he shrieks for deliverance from this grisly burial chamber, controlled feedback and vile electronic noise is shaped into pulsations that simultaneously hammer us like piledrivers and lash us like whips. He too, I expect, undergoes similar painful sensations as he pounds helplessly on the door of his cell. The record calms down slightly after that opening high point of agonised yowl, but continues with horrid synthesisers which almost resemble a sarcastic cartoon version of 1970s Kosmische music, with more unpleasant vocal murmurs and grunts. Smashing!

On Actaeon, Burial Hex offers us two suites ‘The Coming Of War’ and ‘Act Aeon’. I’m still trying to adjust to the fact that Clay Ruby, that seemingly affable and cowboy-hatted leader of US weird-folksters Davenport, has taken this dramatic turn away from songs, guitars and trancey melodies, and taken up a commission with the “dark ambient” brigade. In fact I have a whole CD by Burial Hex on this same label to look forward to. Of course Ruby has his own very personal take on the “cold Black Metal” genre, and the twists and turns of his warped personality are embedded in every note of Actaeon; as the record progresses, there are fewer reference points, no tunes of any kind, and the listener is lost in a strange and bleak world. Like the flipside of this split, it’s another celebration of the woes of the Hibernal season, and was “recorded in the throes of Winter 2011”. The only connection it has with IFOTS is that Burial Hex also uses shouty vocals, with the vocalist likewise poised on the edge of a histrionic screaming fit. The shrieks become even more unsettling, until it’s far from clear what sort of emotion might be depicted at all; it could be some new, diabolical strain of psychological blackness that goes beyond mere despair. These uncanny ululations are bolstered with wayward electronic music (maybe), unnerving sound effects, and an abiding tone of bleak nameless horror. Essential charred food for your black soul!

Datashock are a nine-piece set of German freaky-styled ensemble players from the state of Saarland, and you can hear numerous examples of their spaced-out musical tranceouts on Pyramiden Von Gießen (DEKORDER 052), an entire double LP complete with suitably cosmic colourful graphics printed on its sturdy gatefold, plus a baffling surrealist text by Jürgen Ploog which poses the conundrum “Sounds, what are they?”. The very full sound of this band seems to me to fit in perfectly with the aesthetic of Dekorder; even the owner, Marc Richter, makes solo records that are replete three-course meals of overdubbed keyboards that swell with drone like pastry horns full of whipped cream. Pascal Hector is the main man behind this troupe of free-wheeling hairies, and his own label Meudiademorte has represented many contemporary examples of the free-form fuzz genre – Vanishing Voice, Sunburned Hand, Silvester Anfang, etc. From their website’s polemic and the studied air of stoned insouciance and poised weirdness that exudes from the band photos, it’s clear Datashock would like to pay their respects to trippy and far-out 1970s prog of all stripe, including Pink Floyd, Amon Düül and (probably, though not explicitly named) Gong; while at the same time avoiding any accusations of holding on to the past. Well and good, but on the grooves of this record there just isn’t enough commitment to really getting lost in the realms of the unknown. Datashock have a pleasant sound and there are lots of instruments playing at once, but each tune follows the same formula: one four-bar motif, repeated ad nauseam with very slight variations, until the tape recorder runs out or the needle hits the end of the record. Too much of the record is slow and ponderous without ever being profound, and the sluggishness is wearisome. They never seem to leave their comfort zone, and the music lacks tension. I’d just like to hear this band really cut loose and get a lot wilder and noisier, instead of circling around in these self-regarding mutual admiration sessions.