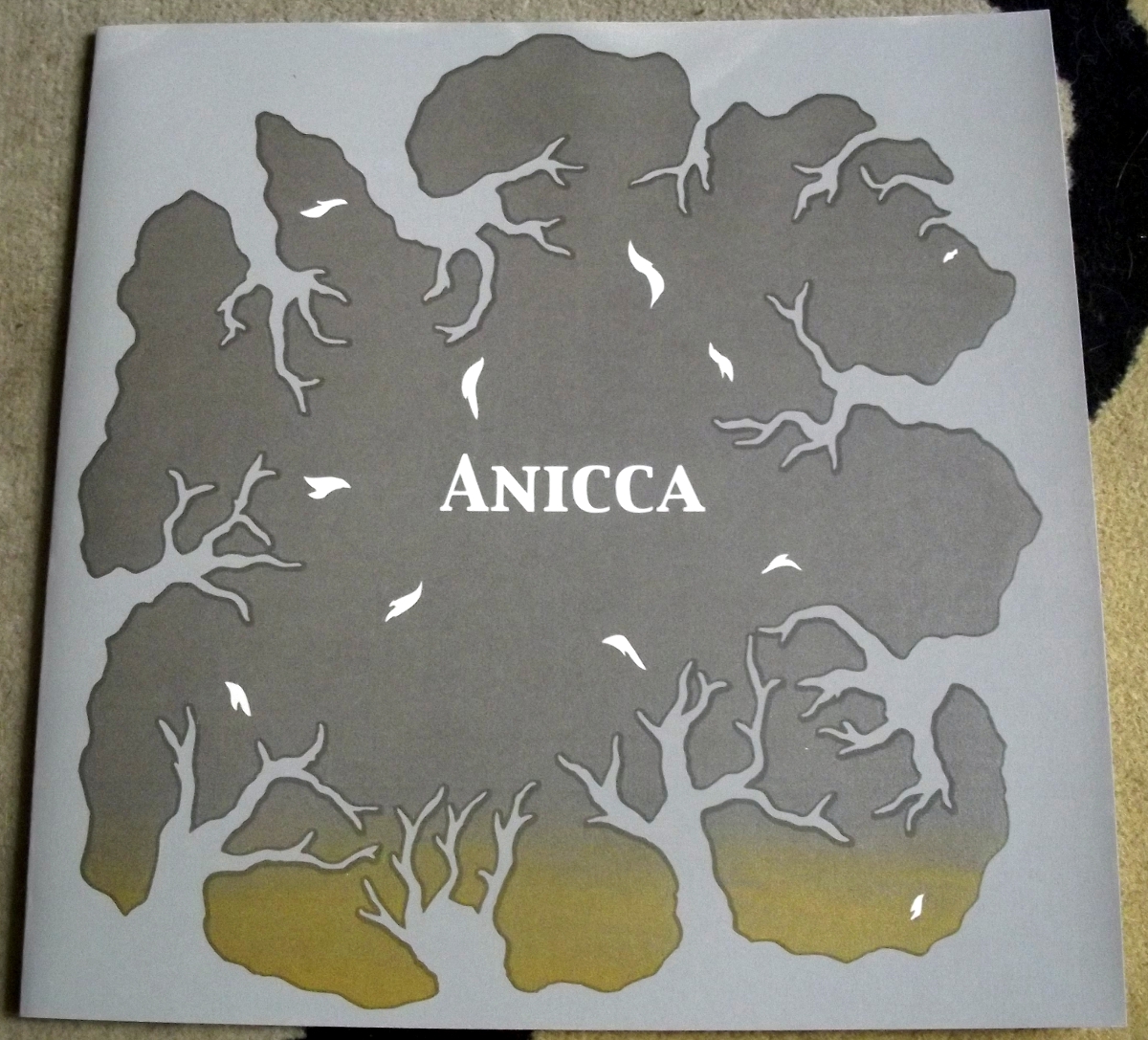 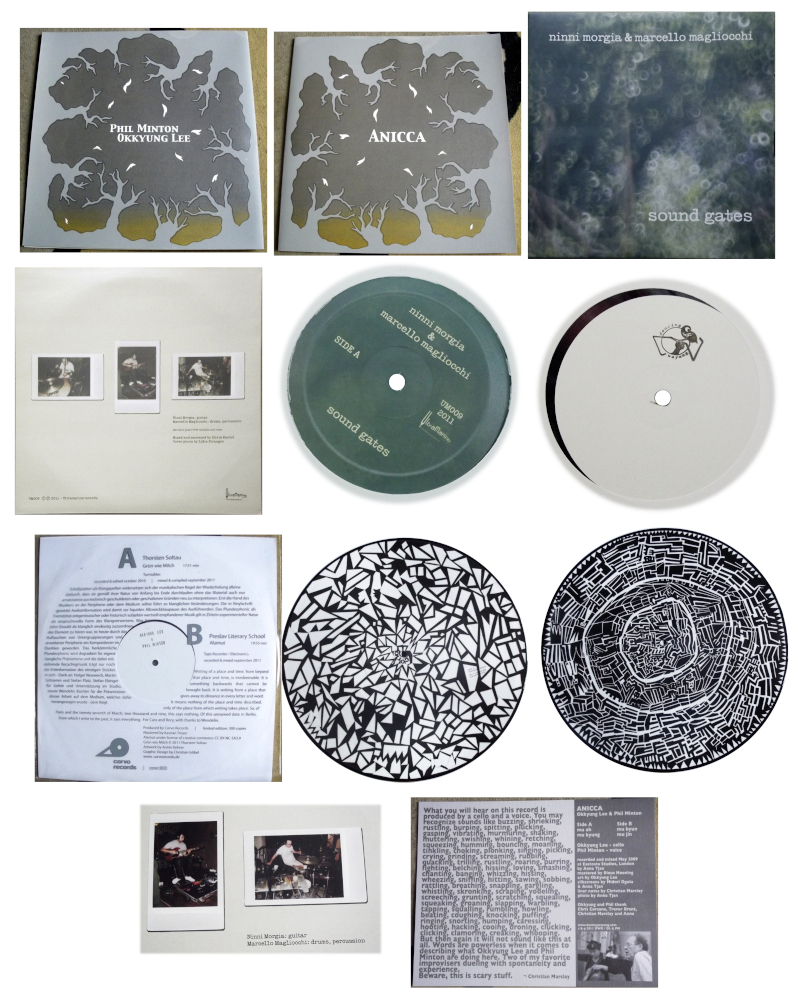 First, long overdue notice for the latest Dancing Wayang Records production which we’ve had in the vinyl rack since May 2011. Anna Tjan oversees all aspects of production of releases on her label, always doing the recording in her studio, and in this instance the visuals too – the silkscreen cover was done by her and Midori Ogata, and she provided the insert photo too. Anicca (DWR 006) is a meeting between the English improvising vocalist Phil Minton and the cellist Okkyung Lee, a Korean-born player whose name is new to me, but she has built up a fine array of collaborative / solo records and performances, most recently on the Cold/Burn LP for Feeding Tube Records. On these 2009 recordings, both musicians are concerned with pushing their respective instruments to testing limits, in the process finding new ways of operation which result in sounds that are alien, terrifying, and fascinating all at once. But it’s collaborative work too, so the challenge for them both is how they wrap their complex mental contours around each other, each bringing respective unknown pasts and hidden dangers to the equation. Yes, every new improvisational collaboration is like a musical blind date. Lee and Minton have an elaborate sympathy-antipathy thing going, which can result in this LP’s most exciting moments of friction. To do this performing live in an all-acoustic situation where you have virtually nothing to hide behind and all mistakes are in the open is a fairly daunting proposition. As with a previous release on this label, the Corsano-Edwards release Tsktsking, Tjan’s task is not to edit or produce or amplify this meeting of minds, but simply to document it. And I have the feeling that “being simple” in the studio is not as easy as you might think; it’s always to Tjan’s credit that she achieves such credible results from the strict disciplines of basic documentary recording. Martin Davidson ought to be proud of her. 1 Like Tsktsking, Anicca can be a restrained and minimal listen at times, but it leaves you face to face with the stark drama being enacted before your ears. Perhaps it’s best just to stick with Christian Marclay’s sleeve note, with his long list of descriptive (and very accurate) verbs followed by the admission of defeat, “words are powerless when it comes to describing what Lee and Minton are doing here”. 350 copies were pressed.

Also more or less in the realm of improvised music, we have Sound Gates (ULTRAMARINE RECORDS UM009) from the Italian guitarist Ninni Morgia and the percussionist Marcello Magliocchi. Like the above record to some extent, it seems both players, Morgia in particular, are concerned with finding another “new voice” for the instrument, and making concerted efforts in that direction. But not doing so loudly, or dramatically. First impression of Sound Gates is an LP full of extremely subtle tones, and you have to burrow inside with your ears to pull out the platinum nuggets of invention. Morgia is admittedly using a few props and ladders to reach the high fruits on the improv tree, among them filters, effects pedals, and a bow on the strings; but ultimately it’s his innovative technique that matters, as he applies fingers to fretboard and strings of his electric guitar in such ways to coax out an impressive range of alien microtonal effects and variegated tones from that axe. Magliocchi taps his tuned drums with the grace of a mosquito landing on the leaf-pads of a jungle plant, applying himself with stern discipline and reining in the natural instincts of a drummer to play too many notes. Like Morgia he also generates far-out and almost disturbing sounds, oddly distant and almost inhuman metallic clangs which echo in a dismal corridor of loneliness. I’m impressed to learn that Magliocchi has a history of playing free jazz with some of the Afro-American greats, has recorded for the famous improv label Ictus (kind of like the Italian version of Incus), and has built and designed his own radical drum kits, objects which are as much fine art sculptures as musical instruments. The two players have put so much energy and effort into developing this constrained and almost forced technique that the actual recorded pieces can appear unfinished; there’s no real beginnings or endings or conventional rise-and-fall crescendo in the dynamics. You may think this makes for unsatisfying listening, but it doesn’t; all 11 tracks are like scattered pages torn from the notebooks of daring experimenters, and can set your mind racing with possibilities. This one is from Autumn 2011, released in September.

The picture disc item (CORE 003) is the third release on the excellent Corvo Records label, and it arrived in my clasping digits on 29 November 2011. The A side of this split is by Thorsten Soltau, cleverly manipulating turntables to create 18 minutes of ‘Grün Wie Milch’. I’ve never heard the turntabling method deployed to produce such interesting and sometimes uncanny results, but that’s because Soltau is an intelligent and exploratory artist, moving on from his previous efforts with digital sampling and actively trying to teach himself a new musical language and striving to get towards a form of musique concrète using this fairly limited set-up, which he describes as “two-dimensional”. By this, I suppose that it’s a method that doesn’t allow the range of control and experiment that you might get from editing tapes or sampling sounds, but once harnessed, the discipline can work highly in one’s favour. What we hear on the grooves is brilliant, controlled chaos, lots of loops, occasional wheeps of feedback from the tonearm, the usual crackling from old scratched discs, and grumbly layers of pure textural noise. Soltau allows the looped elements to work their rough mesmeric magic, but never falls asleep behind the controls as he is directing every second of this melded symphony; as a collagist, he leaves in all the rough edges of creation, as if showing us all the rips ans creases in the paper where he tore the image from the old magazine. The other impressive thing is that, despite using slowed-down voice elements, he scrupulously avoids the “narrative” trap that afflicts so many snatchers from old vinyl, and the work remains resolutely abstract. It’s like a form of broken electronic music, a barely-working but completely unique synthesiser with an unrepeatable set of programmed sounds. Fittingly, the graphics on this side depict a kind of crazy-paving visual effect, or the shards of broken information forming into patterns. Tremendous!

Preslav Literary School is Adam Thomas, a Berlin-based artist who also could be described as a sound collagist. His ‘Alamut’ was produced using tape recorders and electronics, and judging from the rather fey sleeve note is motivated by a very strong sense of time and place in the past, both lamenting and celebrating the fact that the past cannot ever be recovered. Nostalgia, to put it more simply. Certainly his slow pace and long sustained tones do evoke a certain elegiac mood, and at times may put you in mind of the work of William Basinski. The artwork for this side is a jumble of block-graphics that at first sight resembles a street map, which is revealed to be made up of smaller images of people, buildings, cars and dogs; the scrambled arrangement indicates the manner in which nostalgic memories can come to us in broken images. The musical interludes are punctuated with thoughtful stretches of near-silence, and it’s a much more spacey and contemplative work compared with the textural busy-ness of the flip. Preslav Literary School may or may not be using samples from records of orchestral classical music, or playing sustained chords on a keyboard, but he often arrives at the same sort of stately profundity as Tangerine Dream. The artworks for this fine release are by Armin Kehrer, and the item is limited to 300 copies.