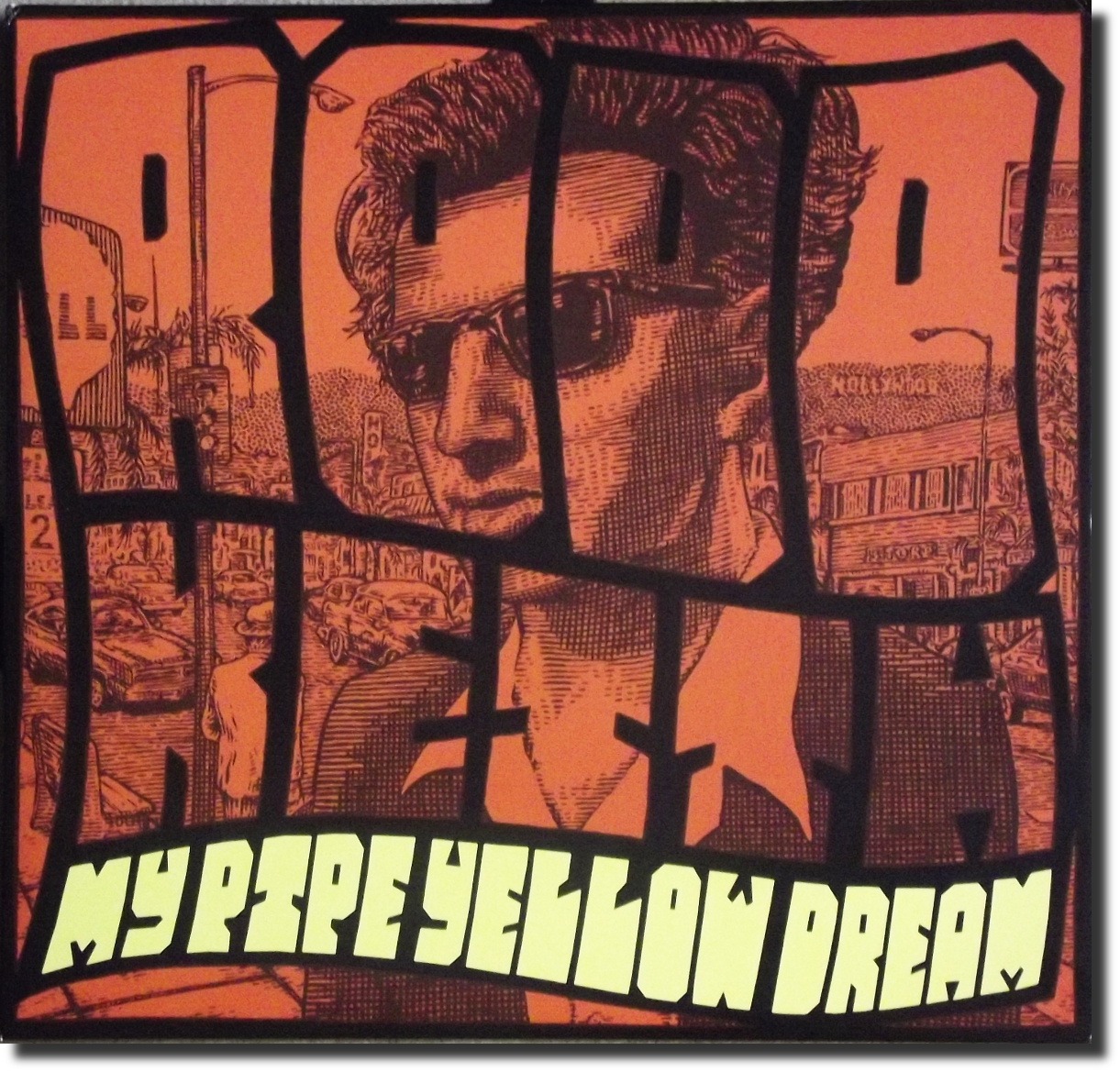 We were sent this Rodd Keith vinyl LP (limited press, gatefold jacket) around November 2011. My Pipe Yellow Dream (ROARATORIO ROAR23) is the second time this label have compiled an anthology dedicated to this singular fellow. I expect you all know the story about these song-poem recordings. It’s been well documented and Irwin Chusid wrote an informative chapter about it in his book Songs In The Key Of Z. It was a kind of vanity press arrangement where you could send your song lyrics to a music company who (in return for a fee) would turn it into a pop song, record it and release copies. Like other vanity press arrangements, it was pretty much a scheme for making money out of optimistic but not very talented Joe Sixpacks from Middle America.

The cult of collecting and appreciating these records long after the fact still seems to persist. I recall JR Williams, the yoks-worthy underground cartoonist, was a fairly rabid fan and for some reason this cemented for me the idea that the whole enterprise was a kind of post-modern, sarcastic dig at “proper” music, as if collectors had reached the point where they were so jaded that only these odd and highly obscure vanity records could satisfy their lust for novelty. I recall buying a copy of The American Song-Poem Anthology: Do You Know The Difference Between Big Wood And Brush CD and never getting past the first few cuts, then selling it on quickly. The lyrics were just dreadful, unmitigated doggerel, and incredibly banal; the very average music didn’t do much to rescue them either. Of course that CD was a late arrival on a scene that had already been thriving from many years among tape traders and other cognoscenti, away from public scrutiny. When a scene gets to the point that it can be so readily anthologised, your radar should start to detect worrying signs.

Very few of my reservations have been put to rest by this LP, despite the immaculate presentation (very good cover drawing by Josh Journey-Heinz) and expert selection of choice cuts (by compiler James Lindbloom) from the Rodd Keith production line. Everything we hear is a needle-drop, from rare singles dated 1966-1974, since the master tapes are probably buried under a bridge along with the accounting books for these song-poem companies. The lyrics beggar belief once again – banal, corny, flat, samey. These would-be songwriters had obvious trouble with even the elementary basics of the form (e.g. scansion, rhymes); no insights or observations; they could not create characters, or tell a story. Many of the words are just recycled from other pop song clichés, and what’s most embarrassing of all is when these squares try and use supposedly “hip” slang. We’re not hearing much that isn’t a regurgitation of very ordinary popular culture taken direct from movies, TV, or advertising. Or greetings cards. I sense that all of this mediocrity had an effect on Rodd Keith, who simply sounds wretchedly bored for 90% of this record. His singing is flat and unengaged, and the backing band of session musicians are like a fifth-rate bubblegum band, for the most part recycling very ordinary pop riffs, with one eye on the studio clock and the other on their paycheck. Taken in one sitting, the LP passes on a strange feeling, like an alternate history of pop that’s been dredged up from the dusty back rooms of a thousand charity shops.

A couple of tracks do stand out. ‘America The Not So Beautiful’ is a recit set to a schmaltzy orchestral backdrop, but it’s a bizarre screed written by one Johnny McCray in which he unburdens his patriotic soul about the corruption of his homeland. What’s odd is the singular details he chooses to make his case. It’s like a Readers Digest article, written by a potential serial killer. Speaking of which, there’s a nasty vengeful streak underpinning ‘Search Out Your Soul, American’, originally written by Vaughn Galloway, and it flings many a poisoned barb at his fellow Americans. Though rendered as mid-1970s funk-lite, you could almost hear this one recast as a violent 1990s rap lyric. Rodd Keith’s voice, especially on the former, is pretty strange; he seems to be dribbling the words out between clenched teeth, uncertain what emotional register would be appropriate for this creepy diatribe. Both of these oddities come close to delivering on the promised song-poem thrills, but you could scarcely call them “outsider” art, as some claim.

Why are we even interested in this? Well, if there’s a pantheon of anonymous hacks in music, then Rodd Keith is the Burt Bacharach of this particular genre. I respect the work done here (and by others) to rescue Rodd Keith from obscurity and the genuine efforts made to recognise something of worth in his output. The notes here praise his ability to compose and arrange very quickly, make a record in a single take; since it would have wasted money to do it otherwise, he was driven to that method by the economics of the situation. But the compilers see this as a virtue, and dub Keith a “master improviser”. Then there’s the variety of song-forms which are represented – on this LP alone there’s bubblegum, soul, funk, gospel and ballads. And the sleeve notes from jobbing musician Dick Castle reveal a touching picture of his friend Rodd Keith, and praises his unflagging energy, enthusiasm, and positive stance. Yet Keith himself regarded his career as a doom from which he was unable to escape, and after drink and drugs decided to take his own life.