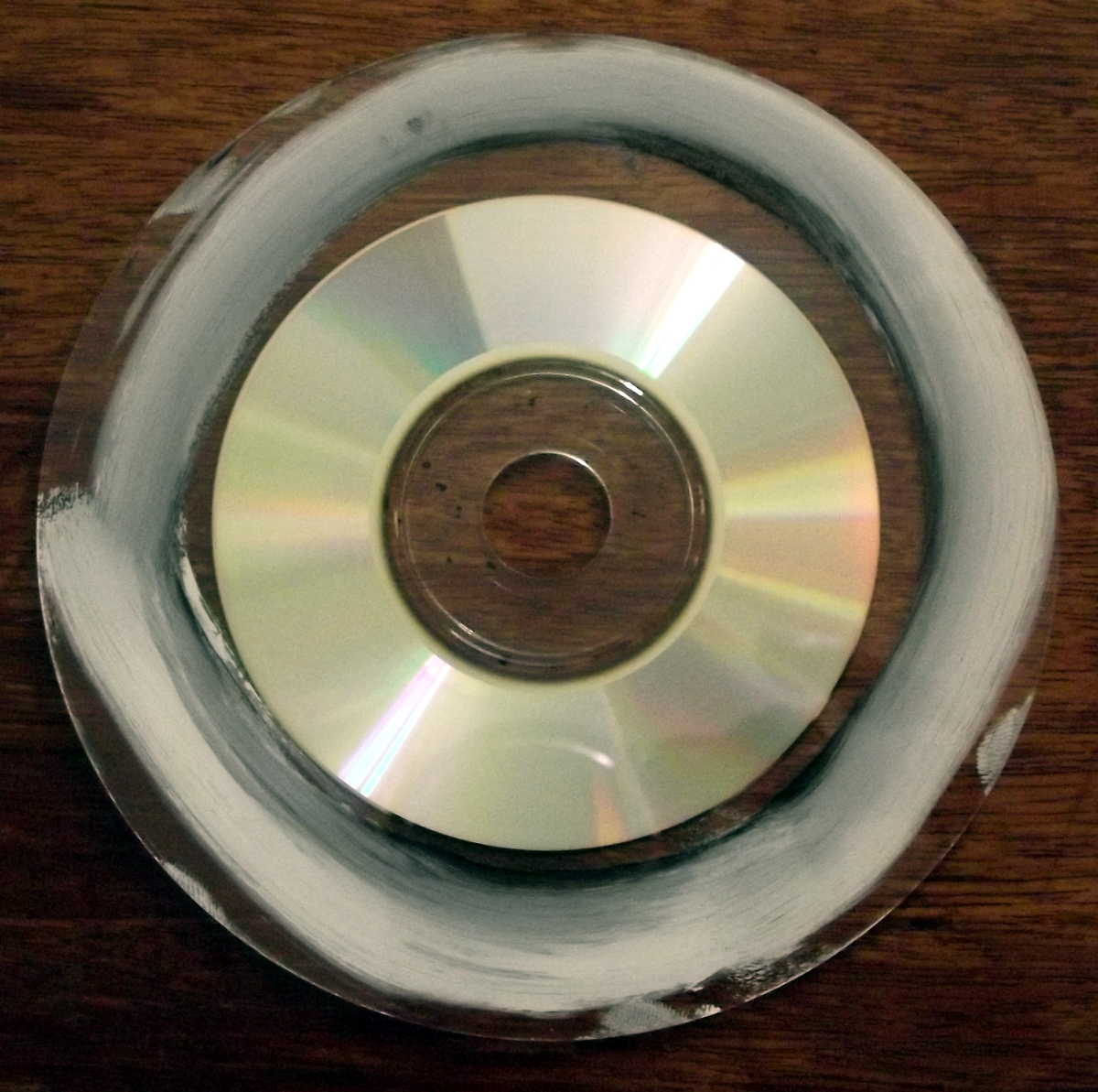 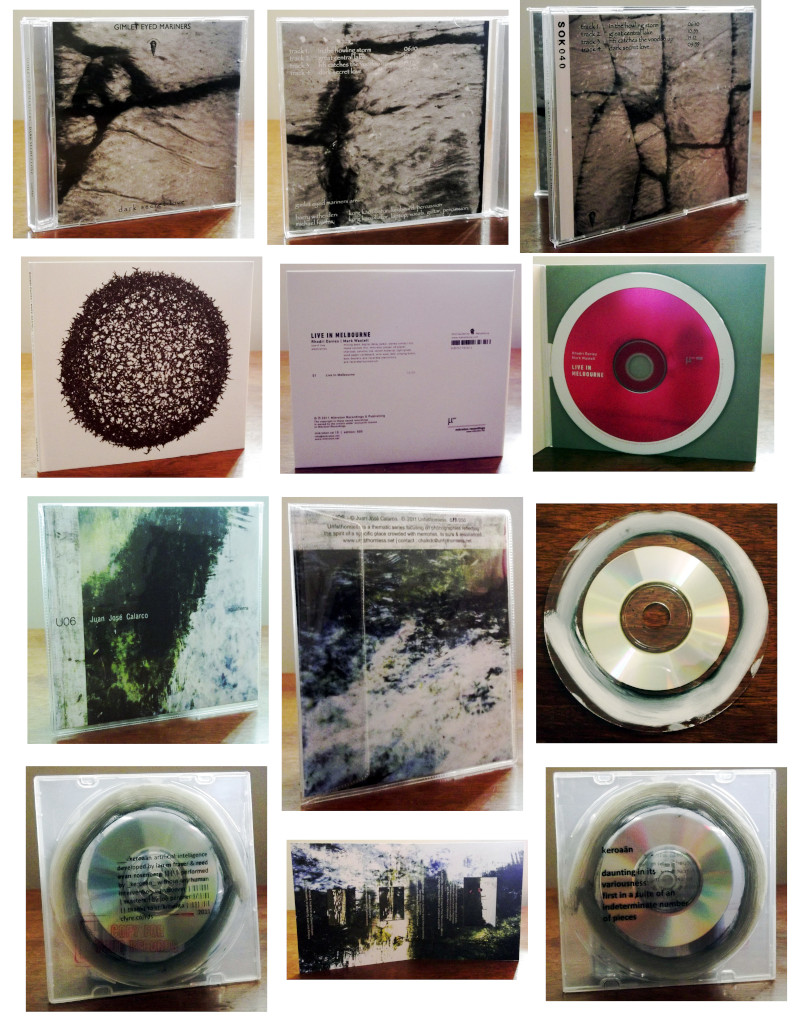 Gimlet Eyed Mariners are the English duo of Michael Fairfax and Barry Witherden. On Dark Secret Love (SLIGHTLY OFF KILTER SOK040) they offer us four examples of their all-improvised, no-overdubs and one-take approach to making music using two Korgs, guitar, percussion, computer, and other keyboards. ‘In the howling storm’ has a nicely aggravated edge to its bleak and slightly formless soundscaping, but ‘Great Central Lake’ is somewhat more structured, arriving at a sort of open-ended melody which unfolds for 11 minutes on top of a simple keyboard pattern. This one reminds us of a very long Residents tune or a less-polished version of a lost track from the Sky Records label circa 1982. So far what they have working in their favour is a very “quirky” sound where the unadulterated voices of wonky synths shine forth with little attempt to file down the edges with some “tasteful” filter effects, which is generally a good idea for synth combos who don’t want to end up like Colin Potter has done. GEM also keep all their “mistakes” in the final product, thus proving they aren’t really mistakes at all. Next to be scanned by the laser device we have ‘Fifi catches the Voodoo Up’, which is a deliberate joke on the famous Miles Davis title. In fact the band consider this 15-minute whirlamaroo to be their “Miles Davis” piece. Reading this prepared me to expect some sort of harsh 70s evil funk, but it ends up as an endearingly British version of lo-fi bedroom warped disco with barely a danceable moment to be had in among the awkward avantish blocks of noise. Percussion loops clatter like tiny bracelets and synth lines swirl and wobble in crazy doodle shapes. After all that fun-loving rodomontade, the title track returns us to their version of “dark industrial murk”, with its semi-comical distorted murmuring and gabbling voices and shudderingly wayward dronescapes pulled out of the intestines of the synths with many gasping protests. This track could well be the one that earns them the Nurse With Wound comparisons, if they wanted to tread down that route for their next release. Mr Witherden wrote the notes to this release, and he is at pains to stress the absence of pre-conceived ideas in their working methods, pointing out that the track titles are only added after the fact and are not intended to colour our views of the music in any way; the music, he insists, is only “about itself”. Fair enough, but I remember when I was 19 my art-college buddy Albert tried the exact same line about “no pre-conceived ideas” with regard to his paintings. The tutor, Harry Weinberger, was having none of it and responded with a long lecture about how that was completely impossible, that every visual stimulus you see influences you in some way, and there was no such thing as this sort of “free painting” ideal. This one arrived 17 January 2012, and the duo are described as “more mature music makers”, who are also evidently quite literate and draw some inspiration from the writings of William Blake.

Improvisation of another kind now from the duo of Rhodri Davies and Mark Wastell. The Welsh harpist Davies is forsaking his usual stringed instrument to manipulate his live electronics set-up on these old-ish (2005) live recordings, from Melbourne (the small English market town, not the Australian city). Mark Wastell likewise has left his tam-tam at home and is electing instead to play lots of close-mic’ed objects, along with his CD player, mixing desk, and electronics equipment. We don’t hear so much of this kind of playing in the improvisation world these days. At one stage there seemed to be a minor upsurge in the incidence of players seizing inert materials like plastic bags or blocks of polystyrene, rubbing them together, and using small contact microphones to amplify the results. Often the results were quite boring, in spite of all that avowed “experimental” activity. Live In Melbourne (MIKROTON RECORDINGS MIKROTON CD 10), I am happy to report, is very successful on the musical front, contains a lot of incident and interesting sounds (no long pauses or pointless silent contemplations), and above all is clear evidence of strong musical skills and an outstanding rapport between the two players. 36 minutes of intense and absorbing abstract micro-shuffling mixed with controlled feedback drones and high-pitched whining sounds. From Russia, this arrived 31 January.

Another item from the bundle of Unfathomless CDs is Aguatierra (U06) by Juan José Calarco. It’s two long suites, mostly captured from the Xohimilco Ecological park in Mexico City, where the artist pursues his interest in canals; there are also sounds from a nature reserve in Argentina, and a collaborator Pablo Reche assisted with parts of the work. As the title suggests, the sound is an elegant and seamless blend of water sounds and earth sounds. The cover artworks also achieve this blending; they were assembled by Daniel Crokaert, using artworks by Calarco. I like this one better than the previously noted item from this label; Calarco seems less “mystical” and more plain-spoken in his artistic deliberations, and the work has a clarity and simplicity that can’t fail to appeal to lovers of the “phonography” genre. Purchase this for a relaxing and slow journey through a very calm and serene landscape / waterscape, with the gentle songs of birds and chirring of insects to pass the hours.

The diametric opposite of calm and serene is that strange inhuman noise offered by Keroaän, on a mini-CDR called Daunting In Its Variousness: First in a suite of an Indeterminate Number of Pieces (COPY FOR YOUR RECORDS CFYR03). This crackling and human-crushing diabolical noise may have had its origins in computer code, if the notes are anything to go by; they refer to Keroaän artificial intelligence, developed by Ian M. Fraser and Reed Evan Rosenberg. The actual music of course is performed by Keroaän itself “without any human intervention whatsoever”. Give yourself time to work through the unfamiliar and near-painful sensations afforded by the gritty surfaces here, and eventually you may be rewarded with near-musical swipes and unearthly screams of complaint issuing from the bowels of this huge chunk of code as it passes through the functions of a media player. The performance is also chopped apart into segments that incorporate heart-stopping silences in among the grunckering brattlements, acting in a grotesque parody of conventional musical dynamics. It may seem stilted and unnatural at times, but the achievement here is the glorious impossibility of it; no human being could ever bring themselves to the point where they might conceive of making noise music in this way, let alone have the courage to execute it. Proof once again that the machines are taking over, and they will win. Fraser and Reed may one day manage to write a machine-readable script that acts as a simulacrum for a virtual Merzbow. Note also the use of the Cagean term “indeterminate”, and the painterly brush work on the disc adding a splash of fine-art loft-scene vibe. From 16 January, another nifty slice of marginal New York experimentism.