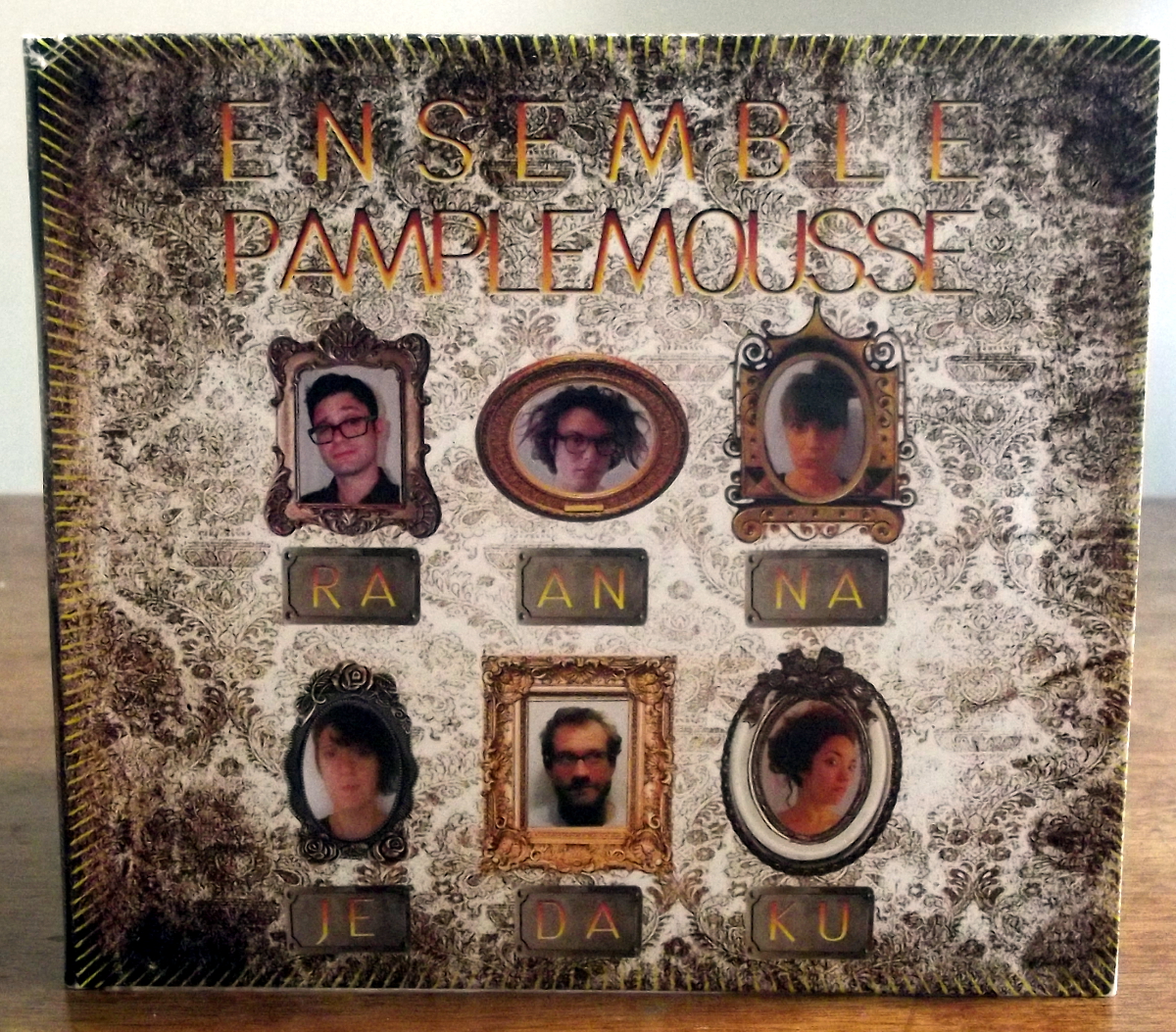 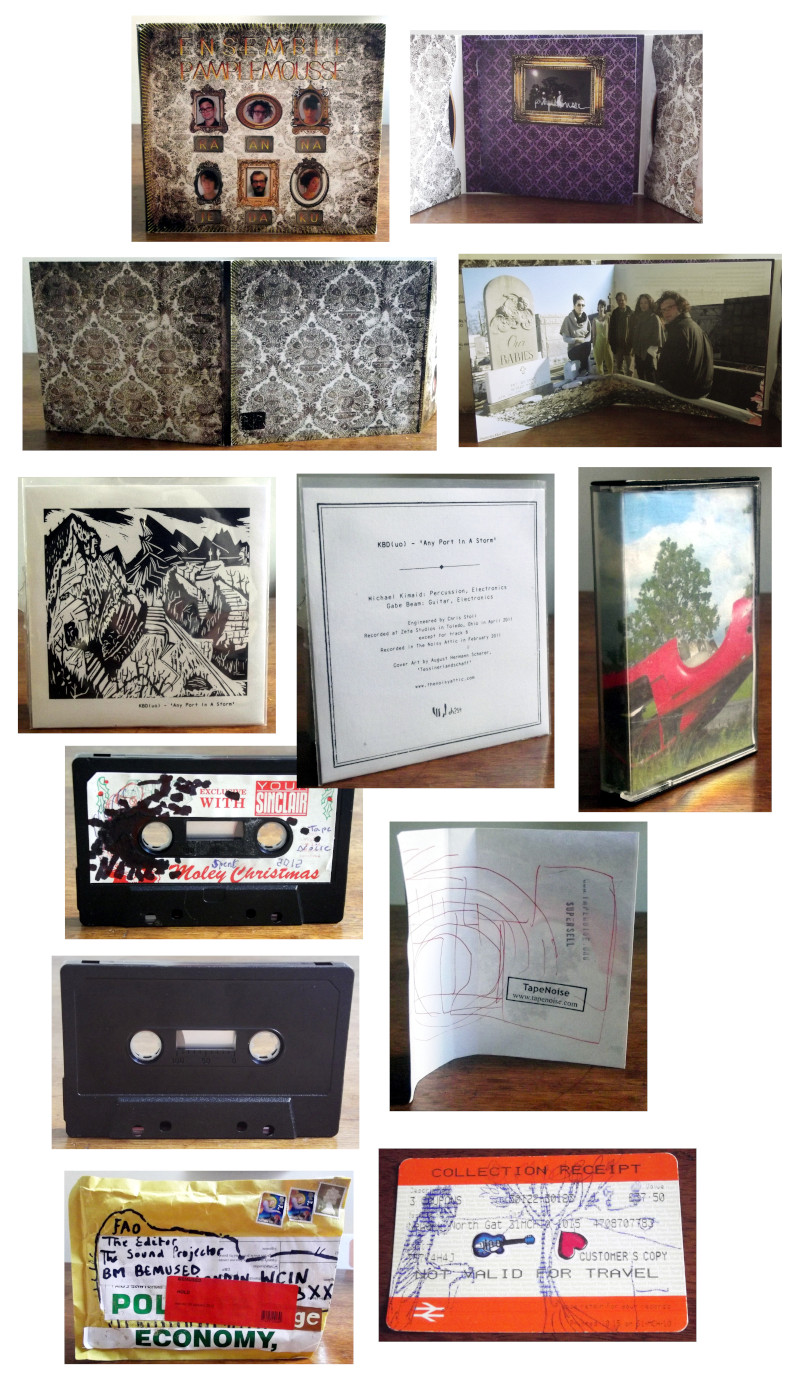 From January 2012, we’ve got a double CD set by Ensemble Pamplemousse, an American combo of performers who are also composers, and seven examples of their craft can be heard on Raaba Jedaku (CARRIER RECORDS 013 2 x CD). They are a mostly acoustic chamber ensemble, with flute, violin, cello, piano, and percussion, but there are some electronic sounds also deployed. Overall the sound of the Pamplemousse is impressive – dense, complex, brittle, with lots of small details and tiny events compressed into elaborate, hard-to-follow structures. Rarely do these geniuses lower themselves to play anything so vulgar as a repeated pattern. I’d love to see what these compositions look like, because for most of the time on CD 1 I was pretty much convinced it was improvised music, full of the happy coincidences and free atonalities you’d expect from a lively confab between such gifted musicians. I think though the Ensemble are trying something a bit bolder than just “free playing”, and have some shared ideals about exploring the extremes of sound, each getting to this point through their exceptional prowess on their chosen instruments. It’s also clear that the music could only be played by this group of collaborators, because they each bring their unique voicings to the collective picnic. The actual performances are, it seems, flexible enough to depart from the compositional structure to allow these more intangible values to make themselves manifest. The rest of the package is over my head, though. The two discs are intended to describe or demonstrate two separate ideas or practices, the first to do with ‘Symbiosis’ and the second ‘Absurd Limitations’, but I’m unable to tell you any more than that. The composers’ own sleeve notes don’t help me much either, packed with rather obscure references and using language that is beyond my meagre comprehension. Clearly these people are extremely intelligent. I’m encouraged that they do think very much outside the box, and rather than producing self-referential vacuities, they try and describe complex ideas in music; their extra-mural influences include science, history,and language. I’m also warmed by the notion that there is lurking within the group a commitment to the exploration of absurdity, but this doesn’t necessarily translate into a sense of fun – at least, not that I can discern in the music. In summary, fascinating music, busy and skittery, with many complex undercurrents; but a tad too “clever” for me.

KBD (uo) are the duo of the percussionist Michael Kimaid and the guitarist Gabe Beam, and along with their instruments they both contribute electronic murmurings to Any Port In A Storm (EH? 54). Their playing styles may not be as sophisticated or developed as those of Ensemble Pamplemousse, but the duo have a refreshing directness of attack as they scrape and rattle their devices, and remain just as committed to finding new sonic textures and unusual voicings. Expect lots of strange exploratory groans and clangs as this duo feel their way along unknown pathways, punctuating their percussive clonks and non-musical grindings with bizarre electronic bubbles of steam. KBD (uo) are very adept at setting up a certain grim mood in their discursive rambles, but I also find they stay a little too long in one place, as if afraid to disturb that mood once it’s established. Most of the pieces are slow and turgid, sinking in a vague morass of abstraction. Track 3 bucks the trend and has a certain amount of restless vigour as a drums-versus-electronics battle, but even so I’d love to hear them get a lot more impolite and assertive, with each other and with their instruments. Studio recordings made in Toledo Ohio, with one track recorded in The Noisy Attic.

Boot up the Sinclair

If a sense of absurdity is what you want, look no further than this odd release from TapeNoise, although I doubt if it even qualifies as a release and if you sent away for a copy the chances are you wouldn’t receive the exact same thing I have before me. TapeNoise is a mystery UK project who remains committed to the old bedroom cassette thing both as a model of practice and an aesthetic, including the whole mailart aspect – he put a hand-decorated rail ticket in the envelope which arrived here 5 January 2012. Other releases I had from TapeNoise in the past were kind of aural palimpsests – he would record over old tapes (found objects, retrieved from charity shops or wherever) and deliberately allow traces of previous content to leak through. This one isn’t even a music cassette; it’s an old computer game. Here, it’s not quite clear what is going on at all, although there are fragments of singing, electronic music, beats, and distant murk which makes no sense at all. The bewilderment factors score high, even when the actual music is not especially distinctive; one side of this very short tape is filled with lame electro-disco garbage, while the other is a peculiar audio jumble of crooning, samples, and playful malarkey suggestive of a Toytown version of the Radiophonic Workshop. The demented song here, half-sung and half recited like a glorious epic war poem, is characterised by its completely insane lyrics. Kind of a shame that both sides are truncated so dramatically, but that’s part of the strategy; pure Dada. Even the envelope is trying to tell us something; its collaged message “POLLUTE FUDGE ECONOMY” has been further disrupted by the sticker from my mailbox service.