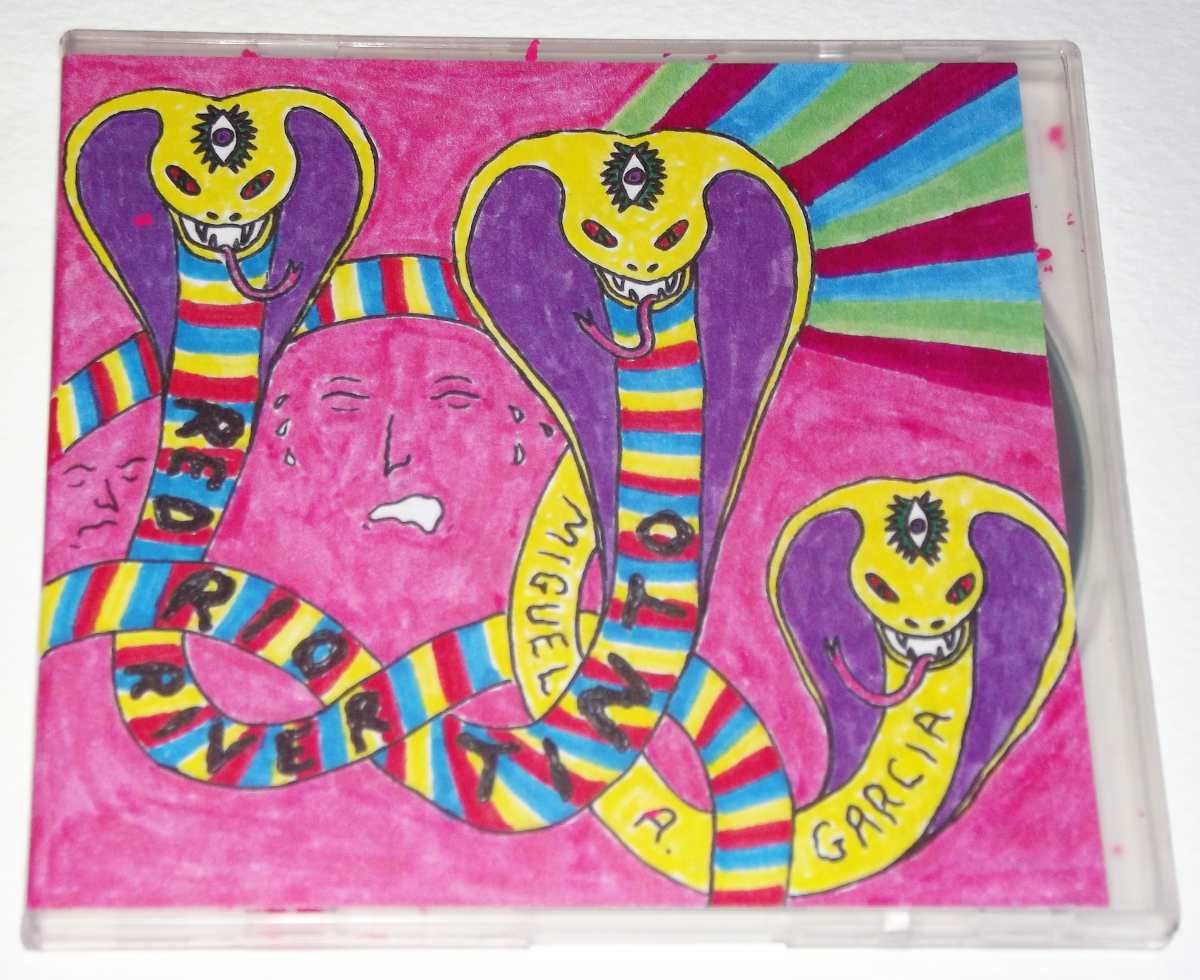 A hefty bundle of CDRs and CDs arrived 14 February 2012 from digital sadist Miguel A. García in Bilbao. We last had news from him in May 2010, though I still recall his earlier Armiarmak record with fondness as a stern and brooding monsterpiece. There’s Cooloola Monster for starters, his team-up project with Carlos Valverde. Canciones Del Diablo (MASK OF THE SLAVE MS 027) is a bracing blast of distorto-filthed-up songs heavy with plenty of clanking rhythms and disgusting noise effects, plus additional voice hideousness provided by guest Ohiana Vicente. How often do we hear something that celebrates the joys of plague, Vlad Tepes, the ‘Curse of Akerveltz’, a journey ‘Into the Crypts’, Judas and The Antichrist, all in one single album? In these bizarre parodies of vaguely rockist electropop music with added scuzzerment for nutrition, Cooloola Monster provide a very imaginative and dynamic angle on the above shopping list of supernatural-horror themes, veering between deconstructed song-form and grisly Saturnine atmospheres of sonic murk. Good abrasive junk. A nifty start to the evening.

Mubles is Miguel with Alvaro Matilla; Miguel does all the instruments, which on El Accesso Al Ser (YOUNG GIRLS RECORDS YGR45) consists of spartan electronics generated with his familiar oscillators and a no-input mixing desk. Alvaro does the vocals and wrote the lyrics, but in case you were expecting Rush mixed with Blue Oyster Cult, their mis-conception of the song form on this occasion is about as radical as the brick foundations for a black cathedral of death. García grinds out fatal noise bursts, grim chugs, painful feedback squeals, menacing drones, and nondescript rumblings fit to raise Bedlam in your listening parlour, while Alvaro simply stands there and whines interminably through his nasal-throat orifice, complaining bitterly about who knows what. In short it’s like a slowed-down Spanish poetry-rap chanted and spat out by disguntled bees to the backdrop of a formless, shape-shifting electronic ghastliness. Or it’s like the Spanish version of Mark E. Smith growling away alongside the dark brother of Martin Rev. It’s great! Plus three guest players supply organ, electronics and more voice. Their name means “furniture” in Spanish, or it would do if they weren’t missing one letter E. Cutely, the CDR displays picture of furniture when played on a PC. Odd bestial sex in the back garden cover sketch is by Raul Dominguez. Eccentricity score so far = about two thousand points. Can it get even better?

Much the same instrumentation is played by García in his Xedh form. On Anekkyy (TRAIT MEDIA WORKS TMW029) he does it with Jon Imbemon, equipped with his guitar and effects pedal. This is just a single 50-minute track, hopefully done live in one take at a studio where the engineers chose suicide by hanging with a flex rather than endure another minute of this grim musical cacophono-fest. Ferocious, abrasive and poisonous sheets of noise just pour out of this deadly duo’s fingertips like death rays emanate from the gun of a hostile alien. Matter of fact I suspect Xedh could cause instant concussion to the skull just by pointing one finger at his chosen enemy. As noise explosions go, this Anekkyy is a deliberative and controlled assault on the senses, and I love the way it proceeds at a remorselessly measured pace, mowing down acres of goldenrods with the awesome certainty of the Grim Reaper himself. The duo leave plenty of space for each other, allowing heavy and angular blocks of sound to protrude from the mossbed of hissing fuzz as needed, creating fascinating abstract shapes of black monumentality. Another chompworthy cake, and released on the label associated with the great Eric Lunde. Box score to García = 3 out of 6.

Here’s one he made with Richard Kamerman, released on the latter’s NYC label. Homophest 20110921 (COPY FOR YOUR RECORDS CFYRL04) I take to be a document of some live event or other. After the previous three scorchers, this 31-minute dose of electronic sandpapering can seem comparatively restrained, but ye must persevere to be rewarded with extremely sullen and bad-tempered murmuring, as unvarying pitches of solid tuneless drones invade your personal space like a scowling man with a heavy, Frankenstinian brow. To make the experience even more insufferable, the duo keep stopping and starting what they’re doing, allowing the noisier aspects to drop out suddenly and leaving you face to face with an inexplicable, mysterious rattling. It’s the aural equivalent of watching your favourite appliances (TV set, fridge, washing machine) start to conk out and die, as you despairingly search for the number of a repairman and then realise nobody does call-out repairs any more. A fine set of contemporary minimo-noise art.

More collaborations on Exiled In Bilbao (DIM RECORDS DIM023 / GOLDSOUNDZ GS#111 / TIBPROD TIBCD127 / SERIESNEGRAS SN008), performed by Larraskito Audio Dissection Unit, an eight-piece of Spaniards who manipulate live electronics, objects, guitars and radio (on one track); García joins ’em for three of the seven cuts, which are probably edited highlights from lengthy jams. Competent enough work, but this is the only one of the six CDs to misfire for me. Put simply there’s just too much going on with this laptop-based orchestra, and the photos of the men hunched over their mixing desks and banks of pedals doesn’t promise much in the way of healthy interaction between humans. Admittedly, the guitar players do much to liven up the solemn tone with their obnoxious axes belching stinky fire into the room. But mostly, proceedings just drift from one formless overcrowded and “textured” drone into another.

Lastly we have a Miguel A. García three-incher, called Red River / Rio Tinto (GHOST & SON GHOST5). This snakey little gemuloid is blessed with a Nick Hoffman colour drawing of cobras on the cover, and its hot pink printing has been flaking off into the case and littering my floor for the last few months. For me it’s a welcome return to noisy spirited chaos and lava-fuelled mayhem, a Habanero chili rammed in my mouth. Its uproarious mood cancels out the polite stiffness of the preceding arty CD. It’s ironic that García credits himself with “constructing” this errant jumble of insanity, when it’s about as broken as an old china plate in 16 pieces. All the gang of buddies are here for this toxic picnic. Alba Burgos and Ohiana Vicente give us their shrill screaming voices, Raul Dominguez hammers percussion like a baby with biscuit tins, and Carlos Valverde mangles guitars sadistically. Nine tracks, most of ’em in the two-three minute area lengthwise, and it’s like how three year-old lunatics would imagine punk rock, if allowed to get their hands on flamethrowers and sticks of dynamite for instruments. Urgent, passionate thrash-racket laced with electronic vomit, power noise, and idiotic non-riff guitar riffs. Irresistible!