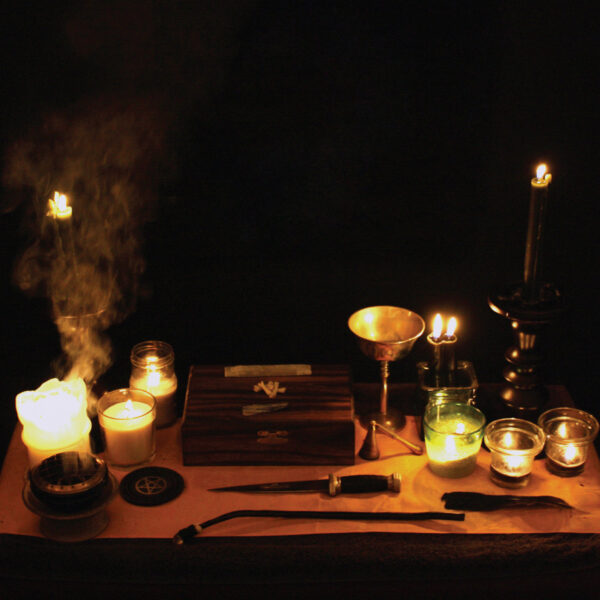 No sooner did Sutekh Hexen’s first full-length album appear on our radar screens than we were regaled again with news that a second album was also on the horizon. “Behind the Throne” is short (only 30 minutes long) and there are just two unnamed parts to it. Part 1 is a grand, majestic beast of haunting, doomy vibrato guitar set against an ebbing and flowing rhythm loop of noisy sandstorm texture that might just be a screaming ghost vocal, shadowed by cavernous echo.There is a subtle insectoid texture layered into that sonic flow. The ambience is forbidding and bleak, reminiscent of Njiqahdda in its desolate phantom wails, but less melodic and much darker and more sinister. About the 7th minute, the track suddenly receives a fresh and aggressively energetic boost from a thrumming bass, backed perhaps by blunted percussion, and a choir of shrieking banshees in a weird relay of constant harassment. The riffing is very minimal, simply going up then down and up again, sometimes gutting itself by cutting out the bass and wandering about in existential uncertainty. Eventually the part fades away in a cloud of pure-toned bells that echo and reverberate.

Part 2 emerges quietly and passively but no less menacingly. Atmosphere is given more emphasis in this slow seething pot-boiler as a vibrating chain rattles unceasingly and guitar erupts about the 4th minute. It’s about this point that the track hits its stride with layers of guitar noise rolling back and forth, each giving prominence to the next and back again. Blasts of scrabbly guitar alternate with clouds of deep inhuman groan, a demon voice roars somewhere within and pulsing rhythms resound deep in the roiling mix of harsh sound textures. About the 10th or 11th minute, the rhythms start to pummel the ears hard and the noise becomes an immense thick wall of scratching, constantly scrabbling abrasion. As with the first part, Part 2 also fades away quietly.

Both parts are impressive in their layers of texture and the ambience that builds up and sustains itself but the structuring is still a bit awkward. There is no definite climax in the second part that would decisively sum up everything on the entire album. The coda seems abrupt and unsatisfactory for the whole work. Sutekh Hexen sure know how to create and sustain menacing black metal noise fusion but after two albums and several demos and EPs, they need to think about how to structure the music for an audience and perhaps to distance themselves from the music a little so they can hear it the way their listeners do. At this point also they should start refining the witchcraft / Satanic concept so that it’s different from all the other witchcraft / Satanic concepts of thousands of other black metal bands throughout the world. Perhaps the duo should start boning up on their Ancient Egyptian mythology to get some of that mysterious Sutekh sinistral energy and inspiration and distill its essence to inject into the music.