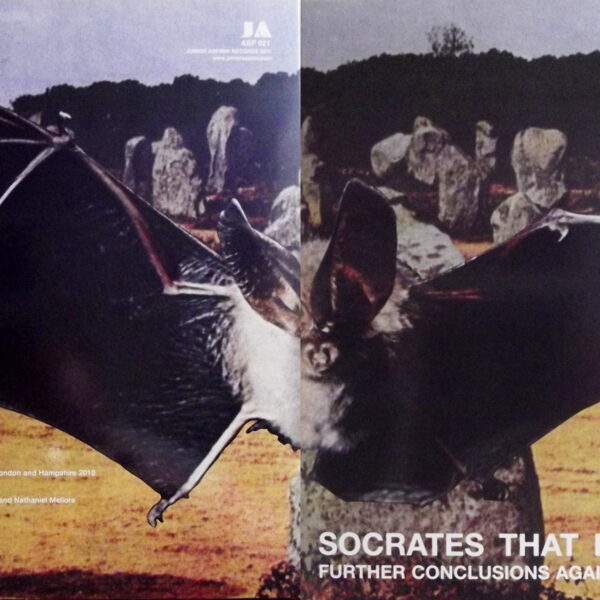 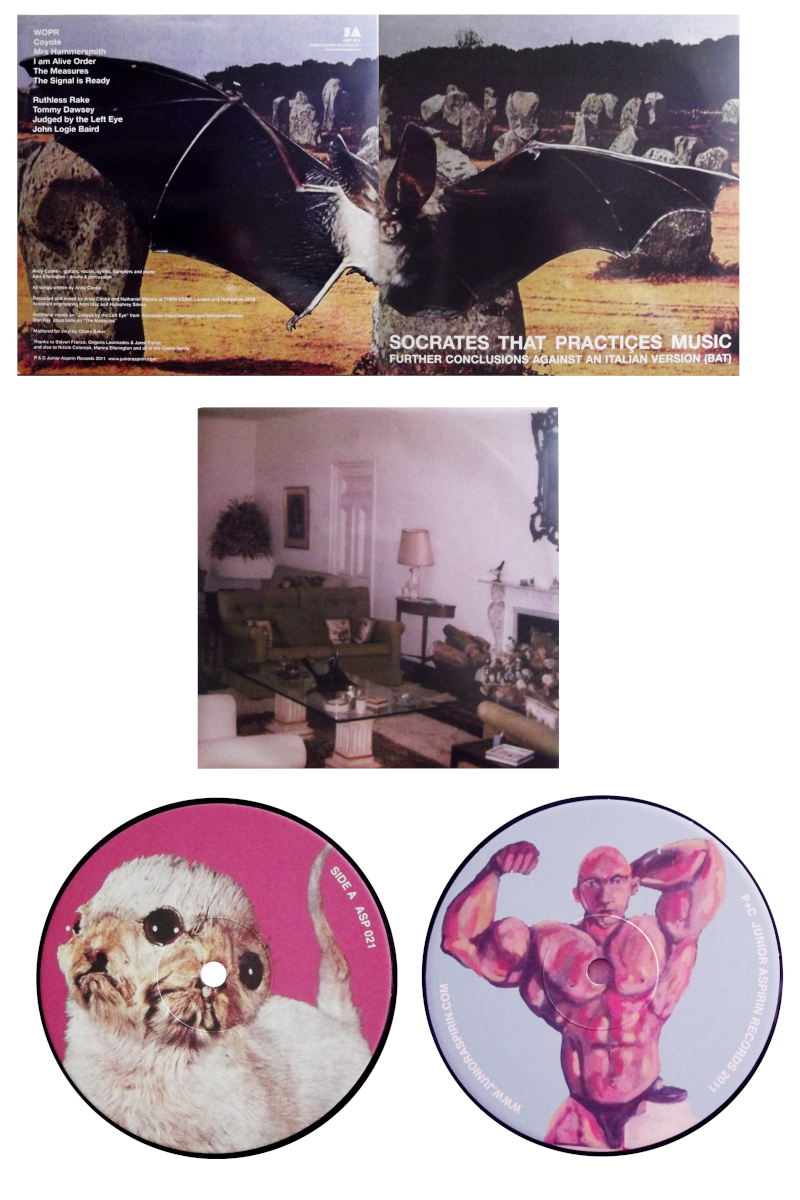 Very eccentric and unusual record here by Socrates That Practiçes Music, one which we’ve had leaning its way in the vinyl pile since at least September 2011, although the limited vinyl actually came out in May 2011. Further Conclusions Against An Italian Version (Bat) (JUNIOR ASPIRIN RECORDS ASP 021) is an impressive art-rock statement by a London group who are completely new to me, containing an uncategorisable mix of content – songs, cut-ups, and instrumentals, with a very English awkwardness and generally puzzling air. The lyrics are fragmented and perplexing, riddles providing glimpses into sometimes rather dismal vistas and inexplicable events, and highlighting the underlying conundrum by simply repeating its hermetic phrases over and over. Lyrically this is easily on a par with Graham Lambkin’s profoundly disturbing texts for The Shadow Ring. Where the tone of these texts isn’t apocalyptic or nightmarish, it’s eccentric to a very extreme degree – ‘The Measures’, which intones sets of statistics for the dimensions of the human body, is so absurd it’s almost funny, but also a tad unsettling. Other songs, like ‘Tommy Dawsey’, impart tremendous significance to trivial and futile details, blurring the edges between madness and insanity. ‘Mrs Hammersmith’ offers an unsympathetic portrait of civil service bureaucracy, and could be read as a political critique or diatribe about society’s ills, but it too soon grows into something very strange. The singer delivers all this in a crisp English accent, emphasising syllables and consonants in mannered fashion, further deepening the strangeness of it all. He has a peculiarly English streak in the tradition of some of the best post-punk vocalists – Edward Ka-Spel of Legendary Pink Dots, Charles Hayward’s singing for This Heat, or that of Colin Newman for Wire. Not a bad set of precedents to pin to your bedroom wall, although Socrates is certainly upping the ante in many areas, partly due to the great conviction and powerful imagination in the execution.

Musically, we’ve got a fairly skewed approach to rock music and electropop songs, where the aim is not to uplift but generally to darken the mood where possible. There is the skeletal “angular” riffing on the guitars that also characterises the post-punk mode. There are short but incredibly beautiful piano fugues; and there are eerie backing vocals like a choir beaming in from a distant radio set. The production technique on the record knows how to use this “distancing” effect sparingly, but to great effect; it all contributes to the abiding sensations of unreality, of dream-like content. Then there’s the use of cut-up and mangled tapes, also used with economy. The LP opens with a twisted tape melange that welcomes the listener to the Italian Version world, letting us know we’re entering a realm of great artifice. ‘I am Alive Order’ is one of the more grotesque tape experiments, a paranoid vision not unlike Mark Stewart and Maffia, where the radically time-shifted and layered voices evoke a horrifying military disaster. Side one ends with an unexpected fragment from a lecture on English monastic history that could be taken from a 1970s schools and colleges programme. And on ‘Ruthless Rake’, the voice element is dropped in to accompany the music, and seems a slightly more benign episode involving a very English woman creating a tape-recorder letter to a friend; its vision of pastoral calm in a garden is quite at odds with the sinister tenor of the music. It’s all part of the deliberately mixed messages sent out by this odd record, with its well-crafted mix of the ugly (terror, madness, absurdity) with the beautiful.

Socrates That Practiçes Music is mostly the work of Andy Cooke, who wrote all the songs, plays keyboards and guitars, does the singing, and recorded and mixed the record with the help of Nathaniel Mellors. Alex Ellerington is the drummer in the group, there’s the guest vocalist Alexander Friske-Harrison on one tracks, and the cellist Dan Fox adds some delicious moments of resonant string work to ‘The Measures’. I’m very grateful to independent label Junior Aspirin Records for releasing this curio and sending a copy, and it seems quite at home with the work of label-mate The Rebel, whose astonishing LPs of disturbing songcraft we noted in TSP #20. It remains to mention the macabre collage cover, with a large bat suspended across a stone circle vista with a yellow ground. With its supernatural undercurrents, it vividly suggests haunted English countrysides and has led other writers to pick up on the M.R. James vibe of the record. So, if you’re a fan of ‘Spectre Vs Rector’, you need a copy of this!