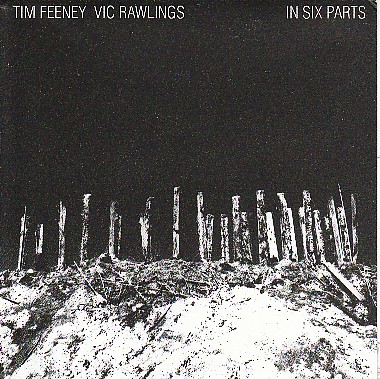 A continuous improvisation of electronically-enhanced cello and open circuits by Vic Rawlings chopped into six parts, aided by Tim Feeney on percussion and mixers, this recording demands a fair amount of tolerance on the listener’s part for unusual and often very tense, high-pitched sounds, po-faced noises and buzzes, and a cold, abstract atmosphere. I sense an appetite for exploration and a curiosity and wonder at all the strange scrapings, rubbings, rumbles and piercing drones that pass by. As we proceed steadily into the recording, more robust and sometimes quite impudent noises come up to us like inquisitive humpback whales circling a small boat, poking their snouts into the hull and allowing the tourists on board to pat them on their sides. Deep throaty industrial-steel rumbles and creaking groans travel side by side with prolonged siren loops.

The album ebbs and flows from loud, busy sounds to far-off and remote tones that barely register over the horizon and the atmosphere changes with the music. Contrasts of sound and changes in mood as thin pulses pass into full-bodied rumbles and bumps, accompanied by crackles, are key to appreciating some of the middle “pieces”.

The final track is a real surprise as sudden regular rhythm metal scrapes are introduced and start to govern the direction of the piece while a quiet drone putters away and odd little crackles appear here and there. The ambience changes to a benign and peaceful calm. A real warmth begins to glow as the puttering grows louder. Finally the track becomes very active as the machine drone takes on a stuttering life of its own and cold space tones join the metal rhythms and swirls. From time to time the metal churns like a malfunctioning washing machine. Somehow you sense that this part of the album sums up everything that’s come before with sounds we met earlier coming back for an encore and final farewell.

If the CD sleeve hadn’t mentioned that a cello had been used here, we’d be hard put to guess what instruments were being used and we would have assumed that the two musicians were using electronics, found or junk materials and maybe some prepared instruments – but not a cello! – as their source materials. A steady tension is maintained throughout the first five parts before finding its release and resolution in the sixth part. The atmosphere at times seems quite reverential if cool and detached. The album appears stern and impenetrable at first but like many people reveals a glowing warmth beneath the cool exterior.