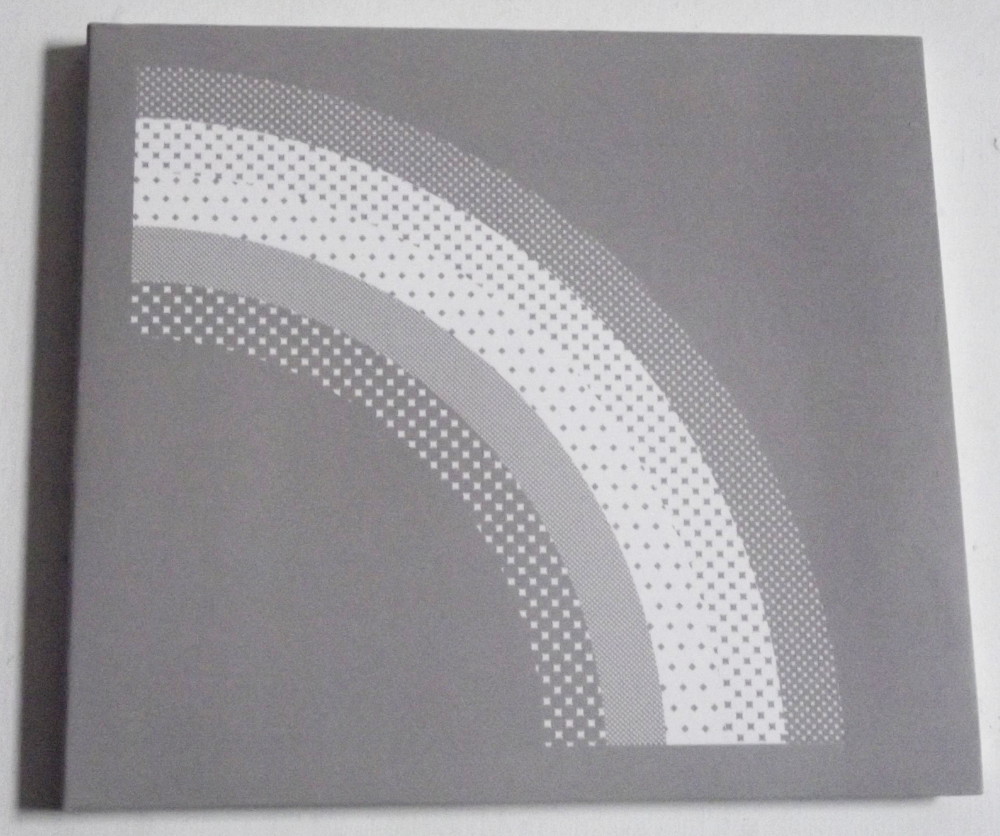 Mark Vernon has created entertaining and witty radiophonic records as one half of Vernon & Burns, and has remained consistently surprising and innovative with his musical and sound art endeavours. Compared to the jollifications of the V&B records, Static Cinema (ENTR’ACTE E126) is a much more refined and restrained piece of work, characterised by its quiet and gentle approach to the management and organisation of sound, and it conveys a general aura of mysterious events unfolding in a surreal, deserted landscape. In the assembly of these small and intimate sounds, Mark Vernon successfully blurs edges between music, sound art and field recording, at the same time building intriguing environments for the listener to get lost in. Track 1 is like a silent white-walled chamber, while track 3 presents an impossible vista comprised of staircases to nowhere, small electronic devices behaving strangely, cars moving through the air, and a dog barking everywhere as though suspended upside down in the sky as in a Chagall painting. Vernon had it in mind to produce an audio drama where the lead actors are missing from the equation, like a vintage BBC radio three play where the dialogue is taken away and all that’s left are the sound effects from the talented technicians, and of course background music supplied by an idealised version of the Radiophonic Workshop. Vernon achieved all of this through juxtaposing recordings of his home-made improvisations played on household objects with an array of field recordings fetched from multiple locations across Europe. His elliptical approach is brilliant, and his understated imagination never falls asleep for a minute, completely transcending the technique. Sent to us 29 March 2012; limited to 200 copies.

Got a full-length LP from Leeds underground combo Geese, who have impressed us in the past with ‘Kensington Terrace’ (their half of a 7″ split) and their groovy The Starseed cassette. All Property Is Theft, All Flesh Is Grass (VANITY CASE RECORDS VC-13) is mostly the work of Graham Bailey and David Lazonby who wrote and performed most of the songs, joined by guest players. Geese perform most of their songs building on a skeletal acoustic guitar basis, filling out the sound with minimal drum machine rhythms, vocals, and melodies played on recorders, keyboards, or lightly acid-fried electric guitars. This is a group that has a dedication to craft in melody and song-writing that feels almost old-fashioned in today’s world of shortcuts and lazy productions, and not one of these highly quirky avant-pop songs would have felt out of place on the John Peel show in the mid 1980s. Lyrically and storytelling-wise, prepare to enter a looking-glass world with scorpions and snakes, a Japanese lady with a pink guitar, a hotel rendezvous between Brueghel and Bosch, a somewhat forlorn take on drug experiences, and quotations from Dante recast into musical form. You may find the thin singing voices an acquired taste, but I applaud their decision to croon and intone in undisguised Yorkshire accents throughout. It’s mostly acoustic folk-pop, and not much of the energetic psych-rock approach of The Starseed is in evidence, except at certain moments when the guitars are let off the leash. Overall a rain-sodden urban vista illuminated by occasional flashes of fauvist colour is conveyed by these wistful and crestfallen melodies and wry vocals. Received 29 March 2012 but released in May 2012.

Machinefabriek is an admirable sound artist to be sure, though I sometimes find he is less able to transcend his technique and methods as successfully as Mark Vernon above. Said techniques are however quite unusual and he’s made them all his own. On Colour Tones (FANG BOMB FB021), he creates sound art through a combination of guitars, tape loops, rescued vinyl records, small tape recorders like dictaphones, a Korg synthesizer, and effects pedals. There are also sampled musical notes from guest musicians, including woodwind players and a cellist; and all sounds are further reprocessed through computer technology. No-one is more skilled and subtle in arranging his source materials than Rutger Zuydervelt, but one is often made aware of the paraphernalia that was used to realise them; the workings of this semi-organic clock-like mechanism made with wooden cogs are visibly evident behind the mist and foggings of the musical sailcloth which covers the blades of his windmill. Colour Tones originated from an art exhibition in Amsterdam in 2011 at the WM Gallery, and were directly inspired by the works of an obscure Latvian short story writer. Some examples of sound art have reached us where the artists are more like physics scientists, and they strive to remake light waves into musical tones, thus somehow enabling us to “hear” the colour yellow. But I suppose this record is not really in that mould, as Zuydervelt has worked hard to compose and layer his materials, rather than surrender to pure process. In aesthetic terms, it might be closer to Dumitrescu and his psychological and philosophical associations based on numbers, something which I think he learned from the writings of Edmund Husserl. Five colours are represented on this album, concluding with a track called ‘Mosaic’ which presumably allows for a mental melange of many colours; oddly enough the rainbow on the front cover is simply five shades of grey, represented by process dots of various sizes. Some intriguing effects are on offer on this 32-minute CD, but not enough variation or drama for this listener among the burnished ambient tones. Arrived 17 March 2012. Must admit it’s good to hear from Fang Bomb again; please bring us more antisocial inarticulate dark gloom-noise from Goteborg!

From Austin Texas we have a tape by Social Drag called New Age Healer (STUNNED RECORDS No. 132). The intention here seems to be to present a listening experience that is the complete inverse of a relaxing-soothing New Age music tape, and accordingly we get about 38 minutes of disorganised and slightly abrasive electronic music. Yet its creator still insists on the healing powers of his music and proposes this prescription as a “remedy for any digital-age depressions”. Social Drag clearly knows how to extract powerful bellows and alien groans from his equipment, and gradually an alien breathing pattern of rise-and-fall rhythms emerges from this vortex of churning, grisly sound, occasionally interrupted by ghastly mutated voices spitting out short messages in clipped tones. Personally I would have liked to find a bit more coherence and structure in the arrangements; for the most part the music gloops out and accumulates into a rather sprawling mass, whose purpose and direction is far from clear. Arrived 20 March 2012 and limited to 111 copies in a splatter-painting cover.