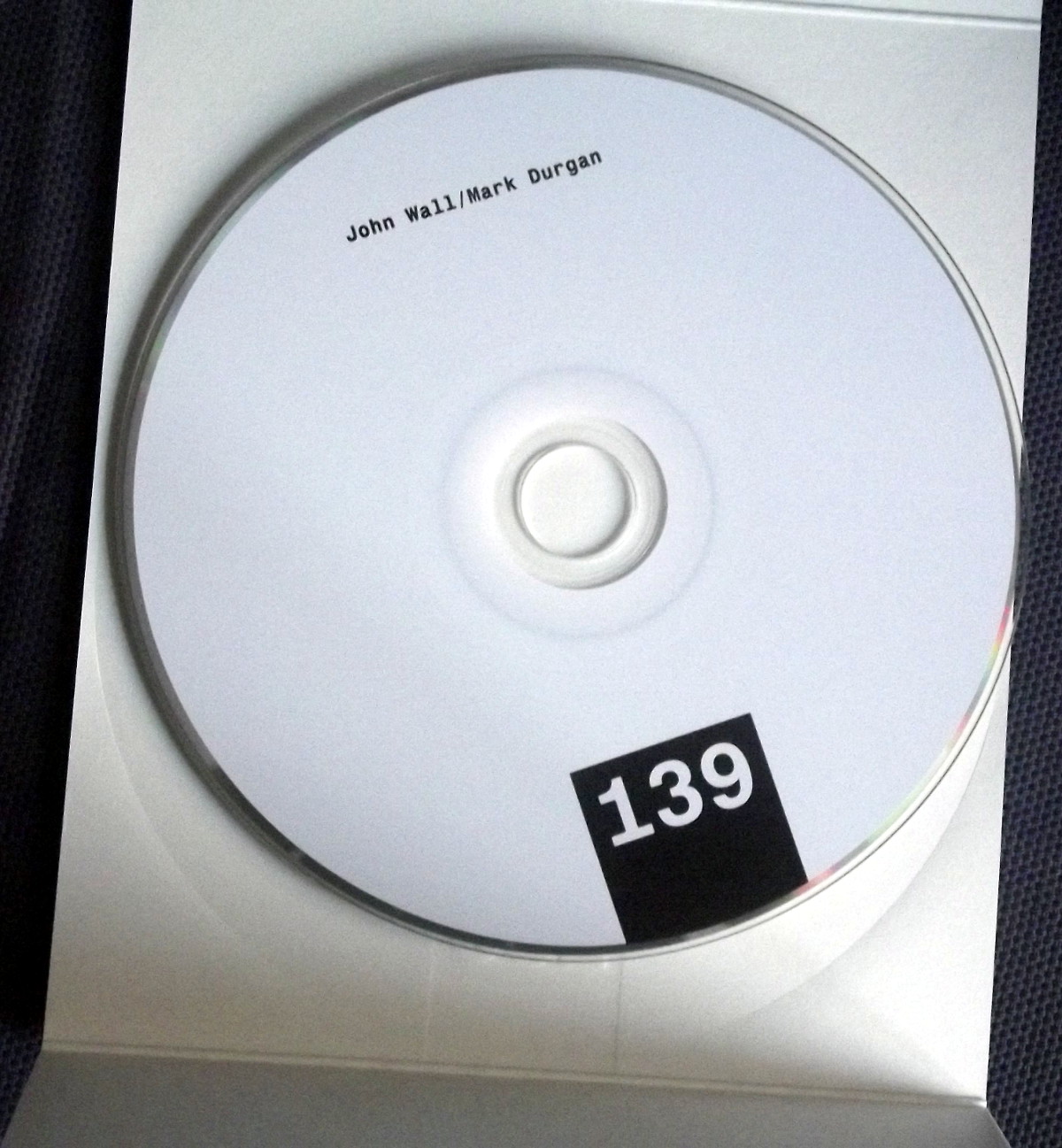 It’s been a while since we heard from the excellent John Wall, a UK composer who has been continually honing his very extreme approach to the art of digital composition. I was rivetted by his earlier work like Alterstill 1 which displayed his meticulous approach to layering and assembling samples, producing astonishing juxtapositions and creating “virtual bands” from highly unlikely pairings of selected records. He made most plunderphonics artistes, especially the over-rated John Oswald, look excessive and careless by comparison. Since then Wall embarked on a trajectory, a path of attenuation that was determined to pare down his already minimal approach, and the music became increasingly austere: shorter in duration, far fewer notes, much more abstracted, and even tougher for the human ear to endure. As he evolved this very fundamental take on the less-is-more philosophy, I sensed by the time of 2005’s Cphon that Wall was sacrificing some of his own human spontaneity on the altar of digital perfection, much as I enjoyed the music. That particular trend appears to be reversing itself on this new record 139 (ENTR’ACTE 139) for Entr’Acte. This may be partially because another human is involved; it is a collaboration with Mark Durgan, the English noisemeister whose 2005 Hypertension Classics Vol. 2 (4 CDs of blistering, churning hell released under his Putrefier alias) still causes murmurs of painful remembrance among the few whose ears it has scarred. On these six untitled pieces, Durgan has been issued with a modular synth, but any predilection he may have had for creating a blistering screech assault has been quashed by the iron control of Wall. Or has it? Minimal as this music may be, the compacted strength of a thousand noise firebrands still ticks away at its mechanical heart. Wall may be doing everything in his power to bleed away the rich colours from each inhuman tone, but as many seated behind the mixing desk have learned, you can’t keep a maverick down for long. Which brings us to the additional credit Wall has taken on the record, that of “severe editing”. One can imagine what this methodology involves, not only a ruthless and focussed effort of selection in order to reduce hours of music to a single powerful blip of concentrated juiceiness, but also carrying out the activity with a stern countenance and furrowed brow, thereby presenting the very image of severity. I’m all for it. If I had my way John Wall would be appointed as a sort of musical censor in this country, cutting down overlong contemporary electronica albums to a fraction of their current length. In fact, why stop there? If he could encode his method into a computer script in some way, it could come bundled with each new installation of Audacity or Max-MSP, and automatically curtail the music at source. That would teach a few people a thing or two! At slightly over 33 minutes in length, this is a record which offers you ten times as much vitamin-enriched protein as any given slice of venison…realised at Wall’s UtterPsalm studios, and it’s also nice to see he’s able to incorporate his letterpress skills (title embossed in blind) into the design of the package, which meets the generic Entr’acte packaging conventions halfway. From 29 March 2012. 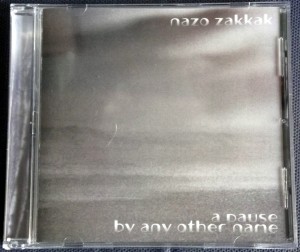 It had a dying fall

From the Californian Accretions label we have the solo piano record by Nazo Zakkak, A Pause By Any Other Name (ACCRETIONS ALP055CD). This gifted composer who currently teaches music at St Katherine College in San Diego has been improvising at the keyboard since an early age, but his Pause record is a structured composition of slow and very beautiful piano music. Zakkak considers himself a modernist and experimental musician, but tends to embrace harmonic structure and melody rather than the indeterminism and alienating techniques of much contemporary classical music of the 1960s. In short nary a trace of John Cage’s dicta can be found embodied in this music, outside of a passing reference to Morton Feldman, whose piano music this superficially resembles in its use of space and very deliberate timing. According to Cecilia Sun’s liner notes, it is to English composers of the 20th century we must look if we want to find real spiritual forebears to Pause, among them Michael Nyman 2, Howard Skempton, and Brian Eno. All those concerned in bringing this release into the light are reluctant to dub this music “ambient” without the application of various caveats, and while many listeners will be instantly reminded of Music For Airports when they hear this, it would be foolish to overlook the compositional methodology at work here. Although recorded entirely by the composer on this release, Pause is scored for four pianists, who are required to pay careful attention to the decay of each chord they play in the series, making use of the sustain pedal and listening closely to the dying chords of their fellow musicians. The act of decay itself plays a part as a trigger in the compositional process, in other words. The album arrives in a rather vague and grey piece of cover art, but it’s a not-unpleasant piece of music. From 14 March 2012. 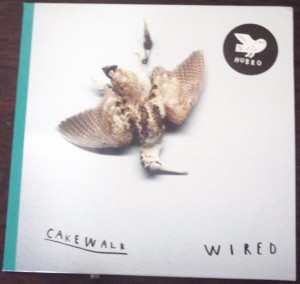 After all that composed music, how about something more performed and spontaneous to round out our day? We’ve been receiving quite a number of items from the Norwegian Hubro label this year, many of them real niftaroos. Hubro seem to specialise in bringing our attention to numerous talented instrumental bands, all capable of producing fascinating music which is impossible to classify, freely mixing within jazz, rock or improvised idioms. What also comes across is great fluency and skill in playing. No exception is the trio Cakewalk, whose debut album Wired (HUBRO CD2514) was released in May 2012. Øystein Skar, Stephan Meidell and Ivar Loe Bjørnstad play synth, guitar and drums and while they are more firmly situated in the improvised rock camp than some bands on the label, the classification pigeonhole drops away very quickly on hearing just a few bars of music. It’s just great instrumental playing with a lot of energy, fire, and innovation, without self-consciously trying to imitate styles or genres such as krautrock, jazz fusion, or psychedelic jamming music; all three players make inventive use of their instruments and generate strong, unusual sounds. I suppose it is fair to remark that the band really have only two modes – either taut fast rock riffing or swirly introspective offbeat droning – but the elements fuse together in very satisfying and surprising ways, and each piece evolves and grows naturally. What comes across strongly is the assurance and confidence in the playing, which is impressive for a debut album, but then all three players are quite experienced and have come to Cakewalk from earlier bands – among them Sacred Harp, Highasakite, The Sweetest Thrill, Kramacher, Vanilla Riot, Glow and the Hedvig Mollestad Trio. Quite a list of names there – what current explosions of talent might we be neglecting in that Nordic Realm? At one time the lazy journalists used to summarise Norway as the home of “Norwegian noise” – and nothing else! Excellent bands like Cakewalk are proving what nonsense that is.