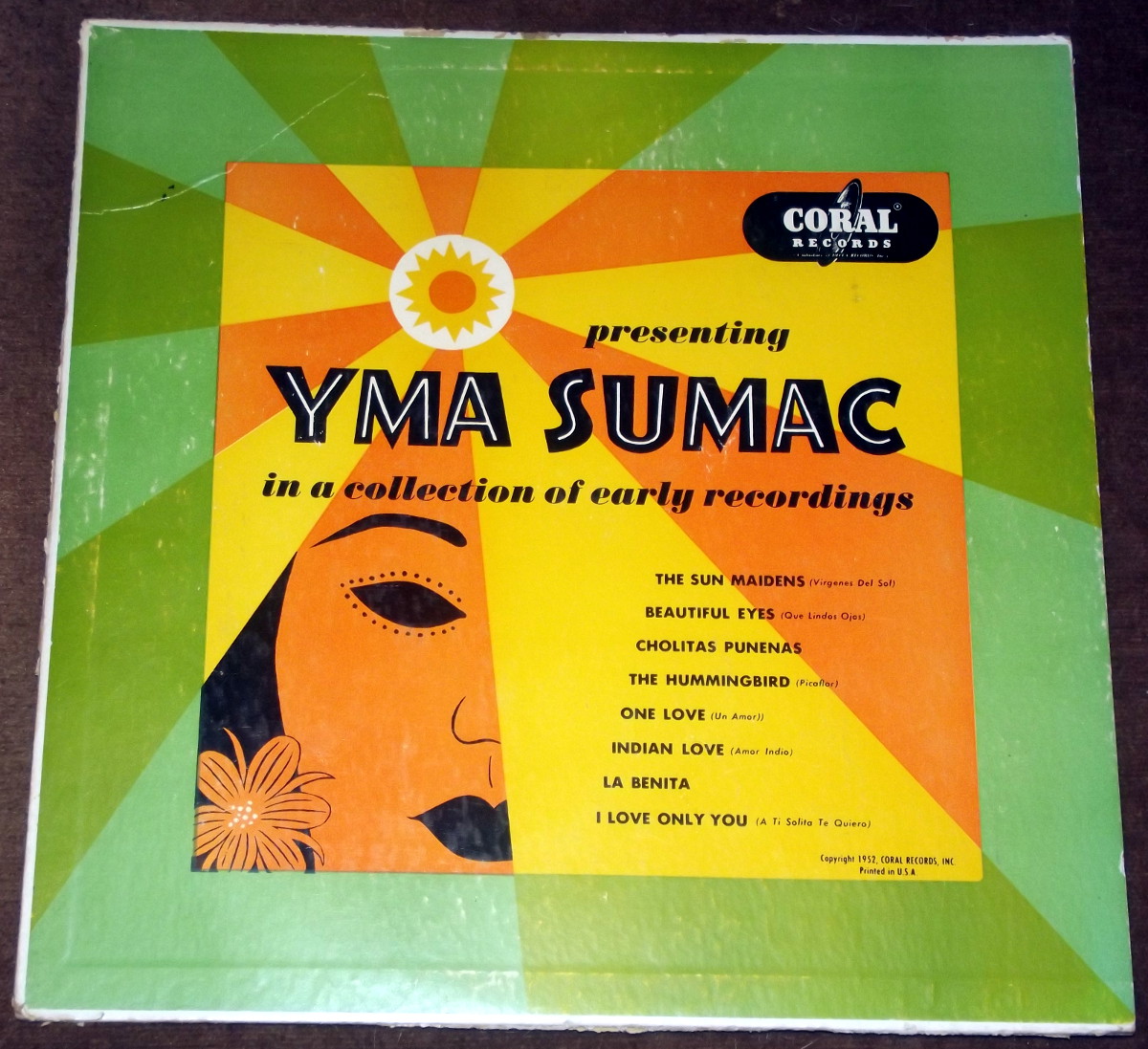 Here’s a lovely Yma Sumac 10-incher (CORAL CRL 56058) which I just received today from a dealer in Athens. I just had to have a copy ever since September this year, when I went to a record fair and saw a copy disappearing under my nose and beard into the hands of a German collector who got to the right box just seconds before me. I had never seen it before. Besides it being an item by my beloved Yma which was unfamiliar, I also fell in love with its yellow, orange and green cover design, and looked it up online. Turns out to be a collection of early recordings made in 1943, recorded some years before her famous debut on Capitol Records, but only issued in America in 1952 to cash in on her popularity after the phenomenal success of Voice of the Xtabay and Legend of the Sun Virgin. This was all news to me. And I call myself an Yma Sumac fan!!

The arrival of this fine item happily coincides with my reading of Yma Sumac: The Art Behind the Legend (NEW YORK YBK PUBLISHERS), a book by Nicholas E. Limansky. I’m just up to p 177 as I wrote these lines, and have learned the definitive tale behind her 1971 rock LP Miracles (another release which surprised me mightily when I saw an ex-library copy at a record fair one time and instantly snarfed it up). Limansky’s book is probably the best text on the subject you’ll ever read. He works very hard to give a balanced and nuanced account of this highly tangled tale, and gives fair dues to all the protagonists. I’ve already learned more about some of the key players who have been somewhat overlooked in the fan-accolades that are usually dished out to Yma, Les Baxter, and Moises Vivanco, such as the flautist Hernán Braña, the dancer Cholita Rivero, and of course Elisabeth Waldo whose Rites of the Pagan LP I have heard, but didn’t realise she also played violin on the Sumac stage tours. Limansky’s achievement in this book is to carefully and respectfully debunk all the nonsense and myths about Sumac (including all the self-made ones) and still leave the essential charm of her music completely Inca-Taqui intact. I can seriously recommend this excellent, thoroughly-researched tome to all hard-core Sumac fans.

Regular readers may or may not care much about my personal Sumac passion, which oddly enough began in 1981 when a friend Pete Woodin purchased the Sun Virgin LP on one of our regular shopping trips to a jazz & blues record shop in Birmingham (and if anyone remembers anything about this shop, run by two brothers named Ray and Alan, please get in touch). My friend plucked it out of the racks on the strength of the cover alone. The man behind the counter made a face, and played us a track in an attempt to bring us to our senses. Needless to say it had the opposite effect, and Pete bought the item on the spot. Soon after this, his hipster friend Pete Thompson found a magazine article about “exotica” LPs and sent us a photocopy. It made the connection between Les Baxter and Yma, and seared the image of the front cover of Baxter’s Jewels of the Sea into my brain. I guess a vinyl original of that item is my next eBay purchase. After that point my obsession truly began. Some indication of where it led me can be deduced in this fannish 1988 article I wrote for John Bagnall’s music zine Hairy Hi-Fi.

Having spun Presenting Yma Sumac on my Bermuda Dansette, I’m not only delighted to have this missing piece of the jigsaw in my hands, but also find the music is wonderful too, even if it’s quite some way from Baxter’s amazing orchestral confections from 1952. It’s basically Peruvian folk music presented in a popular style, but enhanced by her lively and youthful vocal trills. I particularly recommend her rendition of a song called ‘Indian Love’ which is packed with drama and dynamics. Unusual also to hear Yma singing actual words, instead of wordlessly vocalising in such ways as to show off her range – but I’ll leave that sort of analysis to Mr. Limansky. I just hope that German record collector is deriving as much enjoyment from his purchase as I am!