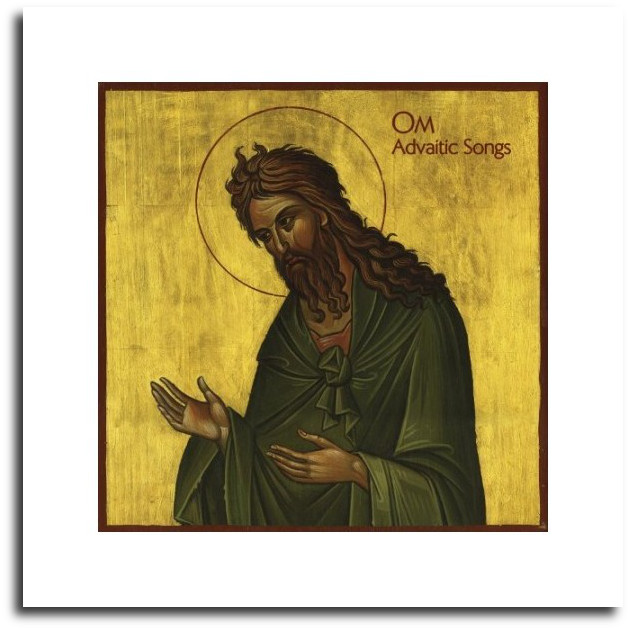 On Album No 5, Om move deeper into meditative, devotional religious territory with a strong mystical Orientalist slant while maintaining an ever more tenuous link to their droning minimalist doom metal origins.  Technically “Advaitic Songs” is an excellent recording: it has a very clear and precise sound and much of the album combines “world music” influences and Western rock, orchestral and chamber music elements very skilfully and harmoniously – but as a continuation in Om’s musical and spiritual evolution, I am not so sure that it advances the band’s journey significantly.

The opening track “Addis” states the dominant musical and lyrical direction with a female vocalist singing a Sanskrit hymn yet the title of the piece suggests Om are looking towards Ethiopian Christianity as an inspiration. Then, as if to reassure listeners (or maybe tease them), we have second track “State of No Return” which features the only doom metal on this recording of the kind we knew Om for: heavy, crushing bass-heavy riffs and no-nonsense drumming carrying violin and delicate piano melodies for some time before they finally take off gracefully and fly far afield, the bass and percussion following respectfully. In this song, the traveller referred to on previous Om albums has reached a promised land and enters a new world, figuratively and literally.

The next three tracks are roughly 10 minutes long each (give or take a minute), are pleasant to hear but seem a little confused, as if not sure they want to leave the familiar heavy drones and percussion of old Om but aren’t quite ready for the quieter, mellower sonic pastures promised by “Addis” and ” … No Return”. Comparisons can be made between this in-between, ambiguous Om with the combination of surprisingly heavy drumming and deep (though not very) bass and lighter strings and instrumentation, with the Canadian post-rock band Godspeed You Black Emperor, though Om have a more even, laid-back approach that does not need to rely on forced drama and sledge-hammering home their messages. Of these songs, “Sinai” begins well with an eerie atmosphere of still, calm synth-generated effects and a sample of chanting vocals before sliding into yet more heavy lumpen percussion, dark-toned cello and silvery sitar: the music sounds fine but the pace is too fast and the drums too overbearing to maintain the needed quiet ambience which slips away quickly, never to return. “Haqq al Yaqin” has a beautifully dark mood thanks to the quartet of cello, double bass, cymbal and tabla that accompany Cisneros’s whispered vocals; again, the rhythm feels rushed and there’s a rigidity arising from the repetition of the jerky melodic leitmotif that acts as a straitjacket on the whole song and blocks the song’s flow. More stringed instrumentation including electric guitar joins in the track’s later instrumental passages but this is not enough to overcome the song’s leaden structure.

Although the music is very good, on the whole I found it frustrating: I thought I might hear something very flowing, deeply immersive and absorbing all my attention with deep calm sounds, free from the strictures and limitations of the known sonic universe. I feel that, having reached a certain level of spirituality, the music ought to have gone into something more or less free-form with a lot of improvisation, Eric Amos free to experiment with his drumming and cymbal work and the sounds of the bass guitar, strings and other instruments manipulated to create very sinuous music that ebbs and flows like the rhythm of breathing. Instead we are treated to songs that seem very restrained and Earth-bound with their repetitive rhythm and melody loops. Let’s hope that on the next album Om can finally let go their terrestrial moorings and soar freely.

The Sanskrit hymn sung in the first track is part of a longer mantra known as the Maha Mrityunjaya mantra or the Great Death-Conquering mantra. This suggests that the theme of bird flight on earlier Om albums might be a metaphor for death and the soul’s journey towards reincarnation.