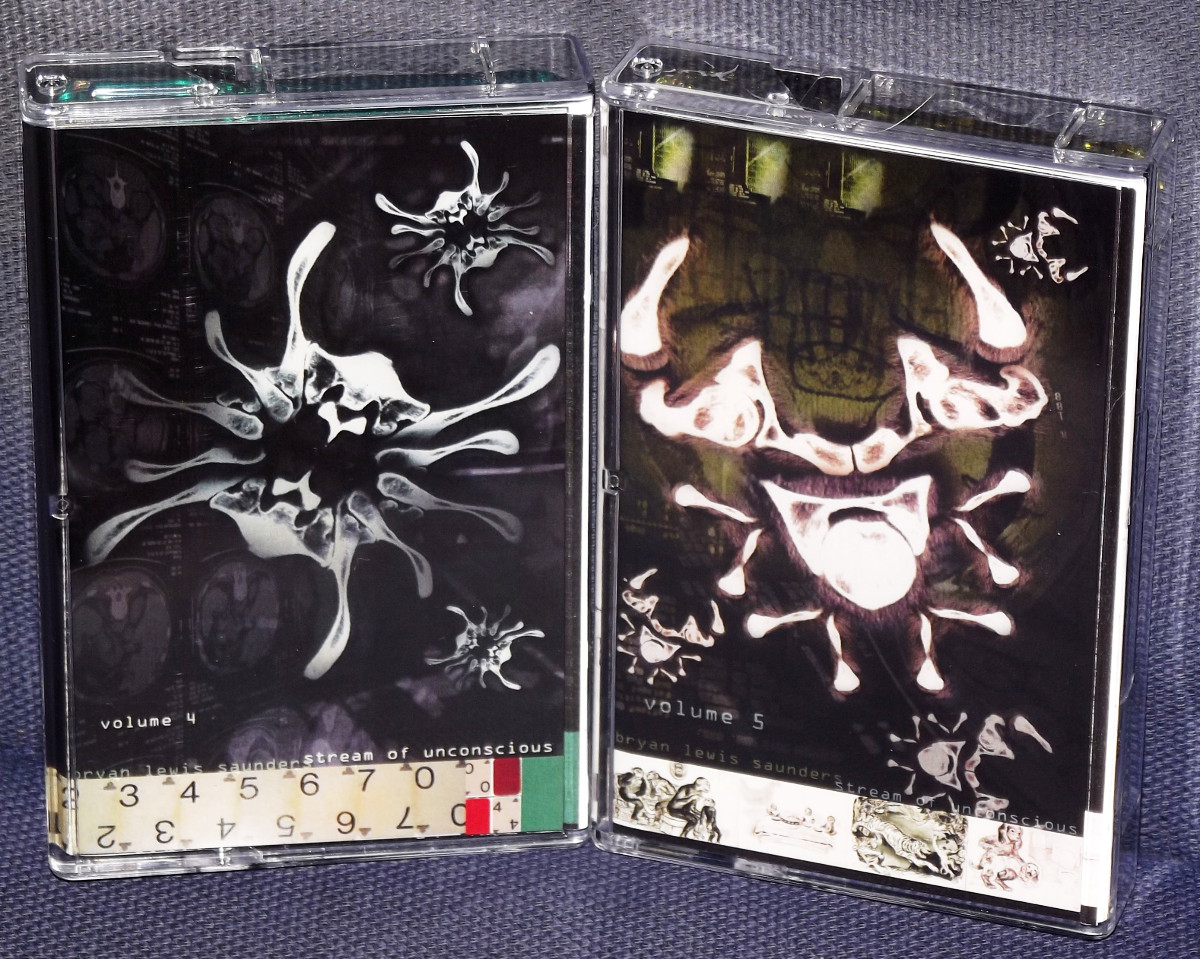 Got another couple of outlandish cassettes from Bryan Lewis Saunders which arrived 12 April 2012. I will declare an interest because although we never met, we collaborated on a book called Protective Geometry. This very extreme performance-art / writer / poet / painter from America knocked us for a loop-a with his drug-themed LP called Near Death Experience, and, making a rare appearance in the UK, he performed last month at Bristol Arnolfini and in Milton Keynes at the Secret Anarchy Garden 2012. These tapes however are to do with his ongoing project to express the workings of his hidden brain centres by recording his own sleep-talking while asleep, then transcribing the results, verbatim, onto the page. Accordingly these Streams Of Unconscious are being published in serial form as he finds suitable sound-art collaborators to contribute to the project. First three volumes in this series were noted here.

On Volume 5 (SUT-13.5), the A side ‘White Surrealist Nihilissmus’ is disrupted by the hyper-busy electronic scratching of Yoshihiro Kikuchi, who scrambles his insane electronic data through a clapped-out computer which he subjects to further abuse with his sharp fingernails and bony digits. These vicious and attenuated sounds are so thin and mean they almost etch themselves into your forehead. Kikuchi plays percussion too, beating his cymbals in the sort of urgently obsessive manner that betokens the soul of a thwarted volunteer fireman who only ever wanted to raise the alarm. Throughout, the voice of Saunders murmurs and whispers his menacing texts implacably. Sheer nightmare, only relieved slightly when the electronic din subsides into a slightly more manageable burring and whirring.

Flip over for Christopher Fleeger‘s additions to ‘Dolphin’s Revenge’. Fleeger works exclusively with field recordings here, but his choice of locales and sound sources is far from conventional – in his list, we have American burger joints, an Australian beach, a European haunted house, and something called the “wave organ” in San Francisco 1. And some river dolphins, aptly enough. Most field recording phonographer types like to celebrate the glories of nature and tend to bring us uplifting and optimistic views of the rich environments in the world. Not Fleeger, who on this occasion creates grim sonic vistas of an unparalleled bleakness, where all the world’s resources have been used up, there’s zero movement or signs of life, and a horrible stillness abiding in the atmosphere. A more fitting accompaniment to Saunders’ texts is hard to imagine. He’s whispering in a cracked voice as though he were the last man alive on earth. Without a doubt this is a truly apocalyptic 21st-century update on Krapp’s Last Tape.

On Volume 4 (SUT-13.4), we first hear ‘The Severed Head’ with a musical backdrop by Love, Execution Style. This Tennessee musician has been wreaking his mutant form of far-out experimental music for 18 years like a cultural terrorist, only taking an interest in pop as a musical form he can hold hostage in his diabolical compound, and even managing to expand his work into film and TV soundtracks. Everything about LES, including the name, suggests a faintly pathological approach to life, and one senses the creator can’t rest until all his enemies are dead. On this cut he plays a combination of musical instruments and domestic objects, including the clothes dryer and the pork chop. It’s not that the sound he makes is particularly unusual here, but the most striking aspect is the extreme disjunctiveness of the performance – events just tumble out in deliberately haphazard and eccentric manner, and nothing makes any coherent sense. Again, this is apt for Saunders if I may say so – it’s music that comes close to matching the fevered half-connections of his short-circuited cerebellum activity.

The other side is tenanted by two improvising names from the UK – saxophonist Adrian Northover, and the godlike genius Adam Bohman. The suite of sound here is called ‘Squirrel Party at Sally Fields’, and given that both of the Englishmen are supplying additional text and voice elements to the piece it can at first seem as though Saunders is almost being side-lined by his own special guests. But instead these jumbled layers of vocals create a strong sonic conflict, a very distinctive taste. Bohman intones, as ever, in his very splendid sonorous creaky voice declaring little-known and overlooked facts about South London matters. Then American Saunders suddenly slithers into the arena like a sibilant snake, overbreathing his surreal texts into the microphone. Northover’s elasticated sax tones can be heard in the small intervals adding small touches of sweet squeaky improv tootling to the strange and dream-like quagmire of noise. I guarantee you won’t have heard anything quite like it.

Both cassettes are once again very nicely presented and all the texts are printed in full in dinky little booklets designed by Alice Lane. Good luck following the words. You’ll need whatever navigational help you can get when you’re adrift in these stagnant backwaters of the brain!