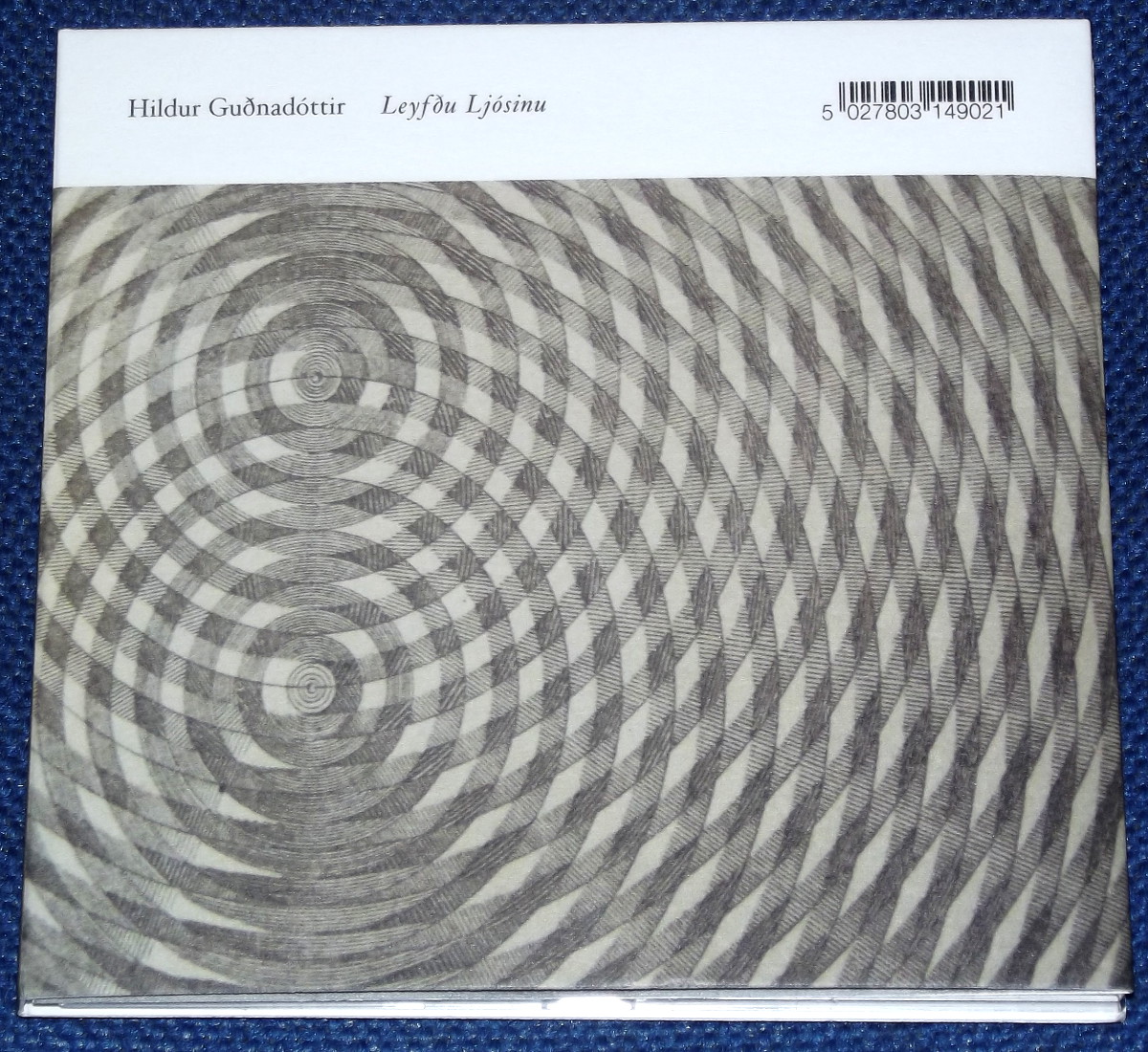 Very impressed with the beautiful melancholy of Leyfðu Ljósinu (TOUCH TO:90) from Hildur Guðnadóttir, a continuous 35-minute piece recorded live in one take, preceded by a four-minute ‘Prelude’. Using her own voice, cello, and electronic effects she transforms herself into an entire orchestra and choir, filling the available space with sumptuous melancholy music. I have found some of her other past records a bit ponderous, but this piece has a lightness of touch that is very refreshing. Although the music does build up into a cloud of competing sonorities, it never turns into a bland ambient porridge, and the sound remains clear and concise. This Icelandic composer and cellist is so confident of her craft that this music, at times, hardly appears to have been created by human hands at all, but emerges from a strange unknown crevasse like a mystical revelation. The title translates as ‘Allow The Light’, and it would not be far from the mark to read this as an allusion to the book of Genesis, and the words God spoke to bring the universe into creation. The music was recorded at the University of York and the notes assure us that there was absolutely no post-processing of the recordings. From April 2012. 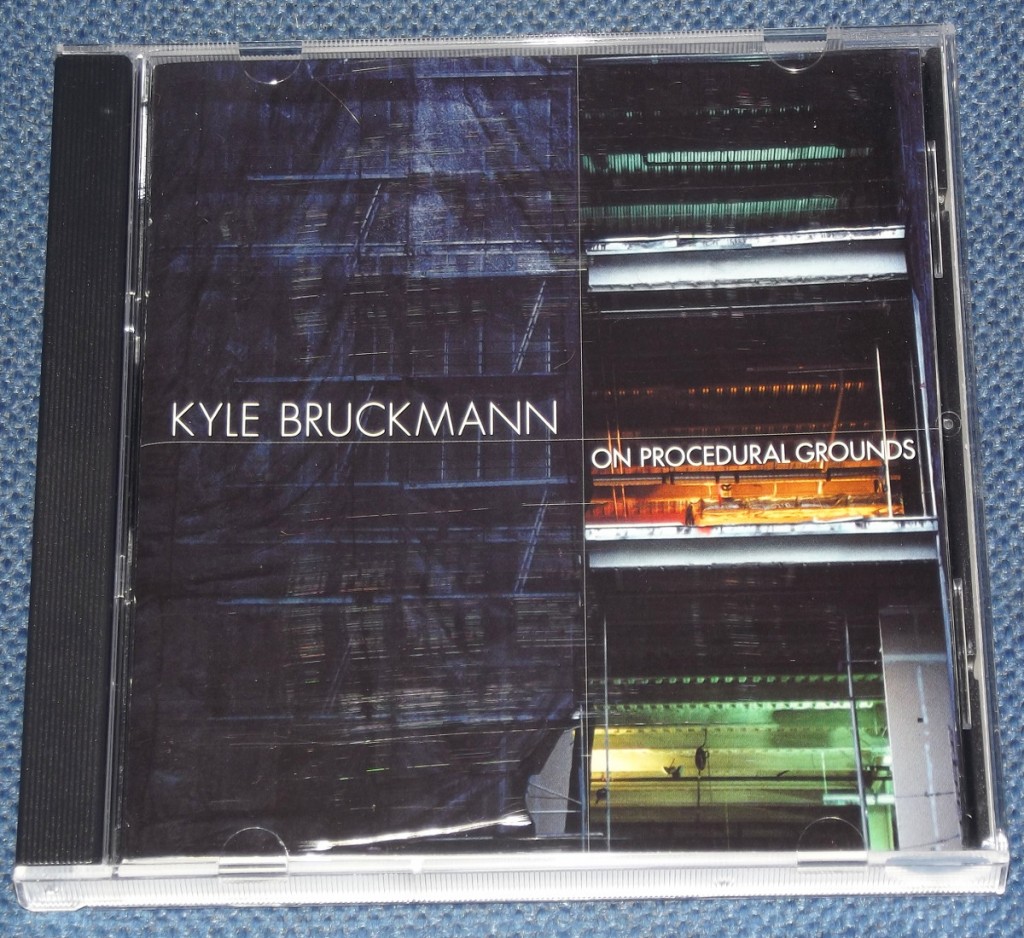 Breathe life into the dead dinosaurs

We enjoyed Kyle Bruckmann‘s Cracked Refraction in 2012, a release on the jazz-ish label Porter Records which seemed an appropriate home for music that crackled with such rocking vigour and vital swing. On Procedural Grounds (NEW WORLD RECORDS 80725-2) is released on the modern classical-ish New World Records label, and shows another dimension to this impressive American all-rounder, improviser, composer, and musical omnivore. I suppose the main event is the 29-minute title track, but I enjoy the two pieces which showcase Kyle’s oboe work. On ‘Cell Structure’ he’s joined by the clarinet of Matt Ingalls with live electronic manipulation. Hearing this piece of scored crazy-paving garden design is like being led around a scale model of a maze with added spring-loaded traps awaiting us at every turn; try to follow the logic-defying musical woodwind phrases, only to meet with a sudden explosion of abstract digital noise, or be lulled by mysterious passages where only a strange rumbling serves as an intellectual anchor for the brain. Then there’s ‘Orgone Accelerator’, a solo spot for Bruckmann with his oboe and French horn, once again treated with electronics. This one isn’t so much of an intricate Chinese puzzle as the former, but it does stop and start in highly baffling ways, while remaining true to its avowed aim of pulsating ominously like a loathsome, inflated pumpkin with a sinister orange glow.

What accounts for this tendency to keep the music permanently surprising, at times almost shocking, to listen to? Bruckmann openly declares his “bent and affinity for discomfort zones”, and Tom Djll’s notes likewise refer to “a barb of The Unexpected” as one of the hallmarks of this fascinating music. Bruckmann also intends to bring improvisation into his compositions in a big way, stresses the social interaction between the players, and creating situations where “the act of listening” is the primary policy. He composes with “the mindset of an improviser”. Even the written score is regarded as a bit of a nuisance, just a formalised way of communicating with his talented collaborators. This approach is shown most strongly and successfully on the title track, which features some fine playing from the woodwind and string section, the great Gino Robair on live electronics, and the entire Rova Saxophone Quartet, four gifted players with their own impressive history of “directed improvisations” which makes them an ideal candidate for performing in this context. This rich work parses into multiple sections, blending generous chunks of quirky modernistic jazz propelled by an irresistible beat with the more free-form, burbly and parpy-type passages of improv gobble-dee-goo. The mixture of half-swallowed clarinet ejaculations with the honeyed syrup of electronic jelly is one ingredient in this tabled feast, likewise the brilliant clashing of the meditative string section playing slow, scored measures directly alongside skittery passages of unrestrained reed-vibrating skronk. At all times, what impresses me here is the relaxed control and assurance with which Bruckmann assembles these competing forces, and convinces us it’s all as natural as can be. Unforced, non-contrived complexity. Unlike John Zorn, he doesn’t aim to jolt us with far-out juxtapositions, and the logic of his method is laid out for all to hear in very precise, repeatable arrangements, cemented together with 18 bags of pure swing feeling. His intelligence and skill enables him, and the players, to sustain this endeavour for nearly half an hour with ease.

The same strain appears in more muted and subtle form on the minimal chamber dissonances and imperceptible events of ‘Tarpit’, which features a small ensemble with woodwinds, strings, percussion. electronics, and a prepared piano. Again, the listener’s logical thought is brilliantly defeated by the ingenuity of this piece, which is both utterly simple and intricately complex at once; it feels like at least two or three separate pieces of music overlaid, working together and against each other, like criss-crossing solid phantoms that can walk through walls as well as the bodies of their spectral compadres. Mr Djll reads this work as a cautionary tale about the slow death of culture through fossilisation, i.e. those who refuse to evolve are stuck like dinosaurs or mammoths in the tarpit of history. He thus finds an affinity with Captain Beefheart’s ‘Petrified Forest’. Any sleevenote that references the Captain is a good sign as far as I’m concerned, so you know you’re making a solid purchase with this item. Arrived 17 April 2012.