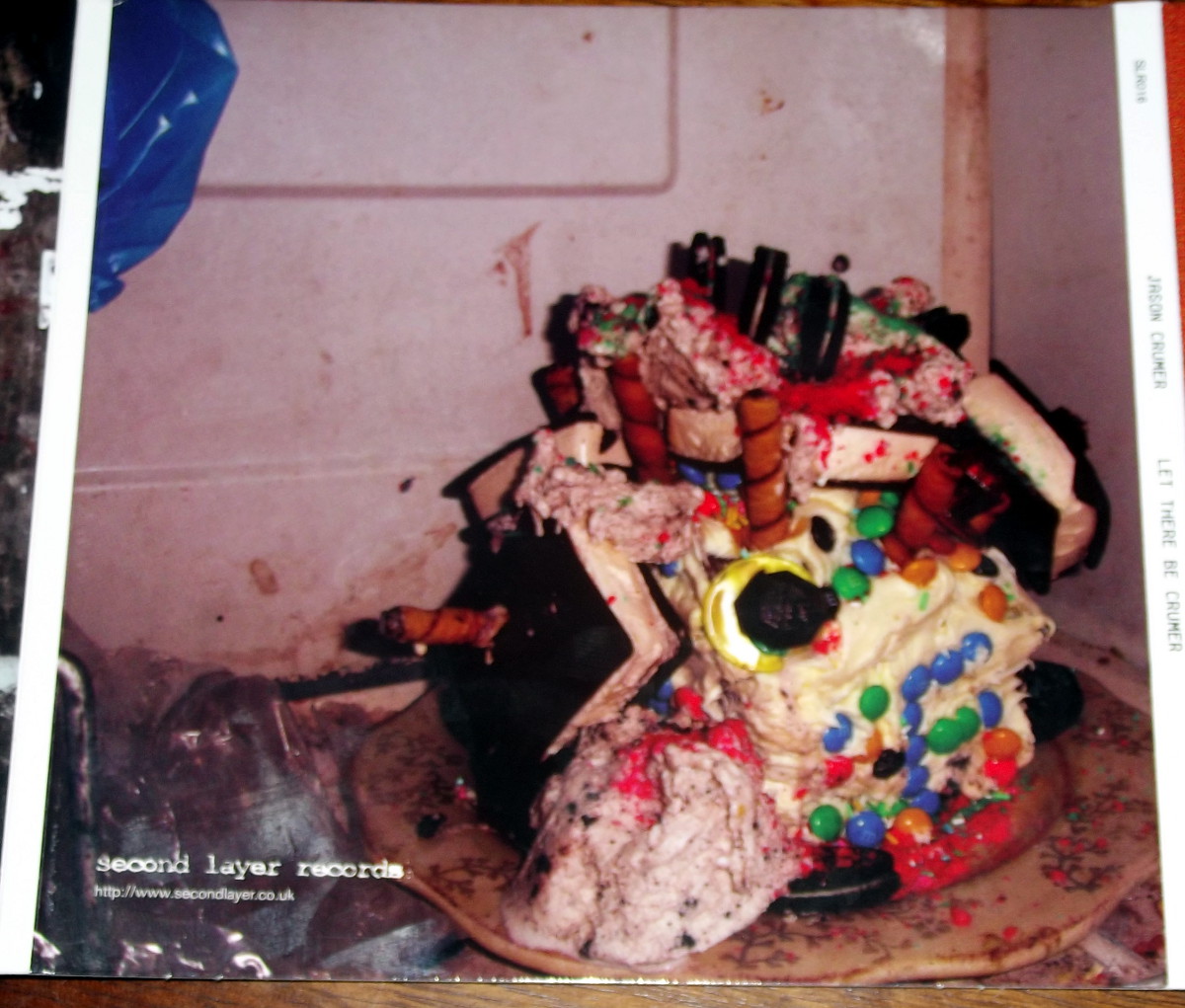 A curiously depressing and moribund piece of abstract noise from Jason Crumer. Let There Be Crumer (SECOND LAYER RECORDS SLR016) is the first I heard from this Oakland, California creator, a man who seems to court death with a rather oblique and multi-layered sophistication, as if wooing the Grim Reaper in calf-skinned gloves and tricorne hat. The music he makes is structured as a tripartite suite, which works admirably when auditioned from head to toe, leading the listener through multiple tunnels of decidedly mixed emotions, not all of them unpleasant, but somehow hard to fathom. Even the beautiful ambient music has a heaviness and bittersweet plangency to it, that somehow prevents our full enjoyment of the moments of respite that exist in Crumer’s otherwise rather bleak universe. It’s a bit like seeing the pallid sun rise at dawn through an array of grey rainclouds, while we are floating on a sea of polluted liquid in a coracle. Then there’s the triple-gatefold sleeve, almost worthy of being exhibited as a concept art statement in its own right. The internal triptych depicts stages of a violent cockfight in Asia, showing what’s at stake; agitated and desperate men, unsmilingly clutching banknotes in the cockpit as they place bets, and a dismal shot of the final outcome. I thought this final image showed dead birds littering the floor, but now I’m not sure – could they be enormous rats? A pessimistic view, which suggests human existence is both a colossal gamble and a squalid struggle to the death. Plus there’s a grisly designer cake photographed on the back cover which induces the same queasy feelings as the death’s head drawn on the disc, and as a visual analogue the cake is not too far away from that skull – if we read the coloured buttons as a row of bared teeth. The inner sleeve is also printed with surreal anecdotes set in a tiny font, just to send your brain spinning into the last stages of delirium. And if that is Mr Crumer on the cover, note how the image is treated to present a lurid visage of washed-out despair, heavily rimmed eyes to suggest lack of sleep or drug use, with an expression that still seeks understanding…the exact inverse of a James Taylor cover shot from 1971…and showing us what has become of the singer-songwriter dream that captivated a million hippies in those innocent days. The album also exhibits a strong and affecting contrast between the compelling and almost tuneful stretches of drone abstraction and the more brutal walls of extremely harsh grinding noise, but I gather that many of Crumer’s releases fit this profile and push the crazy-dynamic aesthetic as far as it can go. In short you won’t know where to put yourself, nor where to set the volume knob on your amplifier. Recommended to fans of John Duncan, particularly if you like his releases such as 1994’s Send.

Neptune‘s msg rcvd (NORTHERN SPY NSCD021) is another glorious oddity. Last heard from these American weirdnuts with their fine album Silent Partner which was the one to introduce me to their unusual world of percussion-and-electronics music, although the band has been promulgating their unique style of music around the Boston area for almost 20 years now. Time to get over the shock of those home-made instruments, which are one of their signature keynotes; let’s just accept that Jason Sandford is a sculptor, musician and just plain wayward visionary type of fellow, here providing the guitar, vocals, feedback organ, oscillator and amplified gas can to the trio’s exploits, accompanied by drummer Kevin Emil Micke and second guitarist / keyboardist Mark William Pearson. Besides the thrilling fractured-rock and electrifying pulsations of ‘Luminous Skull’, we have the more bewildering mental outing called ‘Dark Report’, a minimalist recit of unsettling poetry with only the barest percussive backdrop and shocking noisy shrieky interruptions to punctuate its odd rhythms. This track alone will separate the true believers from the drop-ins who have come in search of more oddball Krautrock-influenced music; ‘Dark Report’ is a genuine existential spooker, and grim enough to have been recorded by the original 1978 Alternative TV. Another major cut of note is ‘Negative Reversal’, a splendid bone-rattler of ramshackle metal, cracked drumming, and unpredictable oscillatory bursts, all used to deliver another cryptic lyric filled with images of skin, anatomical details, and underground-movie styled theatrics, almost a murder mystery story spat out in broken images. The closing number ‘dstl sgnl’ isn’t very uplifting either, with its forlorn spartan drumming and desultory guitar strums, again hewing close to the spirit of near-formless randomness that is the underlying trend of this record. In all, a lugubrious tone may abound on msg rcvd, but the abiding strength of Neptune is their cohesion as performers; they form a tight unit, each leaving space for the others to spread their blackened wings, and have trained themselves to be on guard against the many clichés of improvised and rock music. Particularly so in the drumming department, where they never settle for four beats to the bar – instead, these are rhythms that could wrong-foot any given herd of running giraffes or mountain goats. Neptune also understand how to use noise sparingly and expressively, thus assisting in the depiction of the uncertain emotional states hinted at in their opaque lyrics. Very strong and unusual work which deserves your listening time. This one from 29 February 2012.

The trio Grampus are from Los Angeles, and already on their debut album Ilk Ilk (PFMENTUM CD068) they make theur improvised utterances with rare assurance. The cornerstone of their sound is the modifications wrought upon brass instruments by the ever-reliable digital processor, Max/MSP. Both trumpeter Louis Lopez and trombonist Daniel Eaton go to considerable lengths to disguise, mutate and reorganise the fundamental pitches of their instruments, resulting in colourful alien tones where about 85% of the sound is totally unfamiliar to human ears, the only recognisable element being the traces of human breathing encoded in the music. The percussionist Michael Lockwood negotiates his path around these crazy, ever-expanding shapes, and his brittle attack is a stark contrast to the soft, bulbous blobs of the brass duo. Grampus certainly succeed in creating an unusual sound, and their track titles have a spiky humour. I look forward to hearing a bit more collaborative effort on their next outing, because not all these tracks cohere fully for me, sometimes descending into flabbiness too quickly. From 17 May 2012.

Mag Resistance is the duo of percussionist Mark E. Miller (Toy Killers) with the fab Matthew Wascovich, vocalist and songwriter from Scarcity Of Tanks, our favourite Cleveland band. On the cassette Voice Studies 06 (MY DANCE THE SKULL), they both provide voice elements while Miller does evil things with his mixing desk, and two splendid ten-minute rants are the result. ‘Future Of Futures’ and ‘No More Shadows’ are like political diatribes snatched from a television set broadcasting in 2026, the distorted barking tone yapping out slogans, harsh, clipped statements, and paranoid repetitions to the background of a clunkoid robotic box, sparking on all six. You gotta love the bold simplicity of this approach, like an even more stripped down version of rap music, with no tunes and no strict rhythm. In fact “megaphone and grumbling static noise” just about sums it up. But it’s the scary authority of the speaking voice, which I assume is that of Wascovich, which really makes the hidden subordinate inside of you sit up and take notice. If you listen for long enough you might just find yourself obeying any order, no matter how ludicrous. A strong and abrasive listen with a wiry core. This reminded me a lot of Uns. In fact I think these fellows need to team up with Z’EV as soon as humanly possible; the resulting project could be enough to topple the existing world order. Another from the batch of tapes received from this label 11 May 2012.