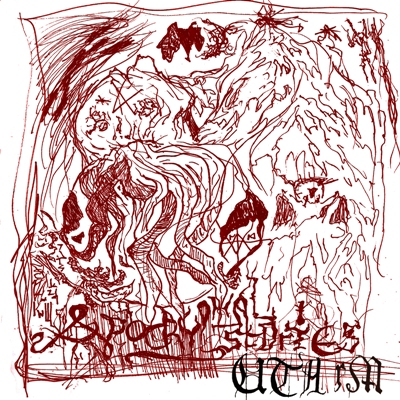 Good thing Utarm called his album “Apocryphal Stories” as I’d hate to think the five songs here were for real. Judging from the continuous demented wailing and screaming, and the twisted theatrical Satanic stylings of the music, you’d think the Utarm man has spent all his life in Arkham Asylum, that mental institution hell-hole beloved of Lovecraftian short stories and Batman graphic novels; and some would say perhaps he has indeed spent all his life in a bizarre mental institution – for isn’t our entire planet one insane asylum where the most severely disturbed and psychotic inmates are those in charge of all our major political, economic and religious institutions, claiming to know what’s best for us? “Apocryphal Stories” certainly plays as if, having awoken one day and realised his nightmare was not only for real but was also never-ending, the Utarm man decided to record an album detailing his horror and anguish at being permanently trapped with 7 billion crazies on Planet Apokolips right here on Earth.

Opening track “AltEtende Skaper” might capture the moment when the Utarm fella wakes up and finds himself sliding into an internal psycho-chaos: it begins with a slowly expanding universe of warped music-box melodies, spooky ghost lullabies and the guy’s own cries of inner torment. There’s a definite air of disorientation as if he’s waking up from a drugged state and he can barely talk and stand. Voices come out of his brain but he knows not what they are, what they’re saying, where they’re coming from or even if they’re his and not artificial implants. Full realisation hits him about the 6th minute in a huge blow-out of distorted metal guitar fuzz, pounding industrial percussion and howling vocal despair. The whole thing is gut-wrenching, heart-breaking and soul-destroying though there’s a campy edge to the destruction.

The torment doesn’t lessen with “Of Rape, Solitude and Bliss; the Triangle of Flesh”, a creepy suspenseful blackened drama of solo operatic singing, more disorientation with a shaky tempo, and a strange stage-like ambience as though a medieval play about the Black Death was playing out before us. We watch the central character tortured by sights and visions in his mind while beings of ether swirl around his head, baiting him constantly. Again, quite late in the song, there’s new existential pain as a wobbly guitar melody, distorted static buzz and something that sounds like a demon cow mooing and sitting on top of the singer drown out his screams.

And so the album plays out like a twisted Ingmar Bergman film of soul-searching amid desolate soundscapes of bristling, buzzing guitar noise, gently swirling and trilling guitar melodies, tortured screeching and always that strange atmosphere of blissful and serene yet deranged black trance. Layers of sound and noise are at once warm and soothing, and filled with agony and derangement. No matter how bombastic or demented the album gets, there’s always a very strong sense of direction; the songs could easily have gone all over the place and become totally overpowering but it’s to Utarm’s credit that the music is intense and focused throughout the album. The result is that compared to similar blackened metal/industrial/noise acts like Gnaw Their Tongues, Utarm comes across as epic, bombastic and even majestic without becoming overwhelming. There is a core of trance-like bliss in the music that’s reminiscent of drone doomsters Nadja.

Well … the avant-black metal/industrial/noise torture continues all the way to and through outro track “Above Death” with more whooping screams and howls, a strange echoing hover-drone as if our man had been dumped in an underground wind tunnel lined with metal sheets and high-pressure industrial white hiss is pissing through it. Severely damaged freak-out power electronics are being churned out of a sausage-mincing machine; the manufacturers would collapse and die in horror at the way their choppers and mincing grilles were being used here. (Especially if they were the ones strapped to the conveyor belts.)

This collection of grimmer-than-grimm fables and fairy-stories is freaky and intense … the music is scary and noisy, anguished and tortured, yet at times strangely peaceful, trance-like and blissed-out at its centre … a deranged genius is at work here.