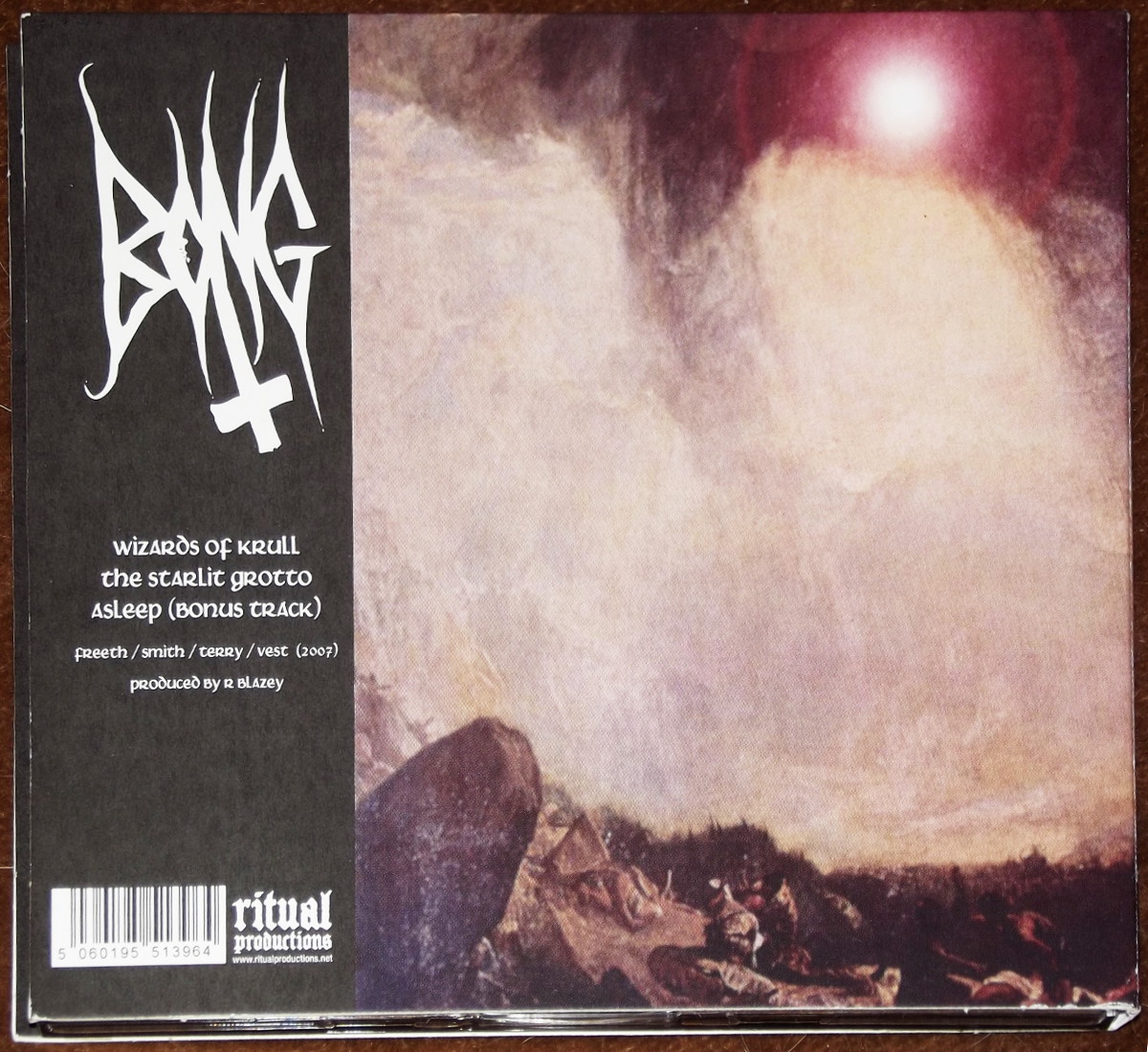 Reissued in 2012 with an extra track “Asleep” that makes the album nearly twice as long as it was originally, this self-titled debut album from the aptly named Bong is a mighty droning work that might well reference Sleep in its low sonorous vocals and intensely circular music. The original album was split into two tracks of roughly equal length, “Wizards of Krull” and “The Starlit Grotto”. There are very minimal lyrics attached to these two tracks and they spell scenes in faraway lands of faraway times, in which despotic rulers used rite and magic to keep populations in thrall while secret cults gather in underground caves to pass messages to one another in obscure codes and hieroglyphs. The recording is slow, stately to the point of being ponderous and is even arduous: droning stoner rock does not come easily no matter what listeners think!

“Wizards of Krull” could be a rite in itself, with the hypnotic looping music intended to put you in a trance so that you enter Krull and observe the ceremonies performed, maybe even participate in them. (Just so long as you’re not  the sacrificial lamb.) While percussion and rhythm guitar pound out the monotonous and sometimes harrowing rhythms, lead guitar sounds out like shofars calling worshippers to attention. Low droning voices intone the sacred messages to send all in a deep meditative state, concentrating their mental energies on pushing the rituals as far as they will go.

“The Starlit Grotto” is a very gradual piece that accumulates, bit by tiny bit, flotsam and jetsam of musical fragments and beats on a very basic structure of pulsing bass notes that repeat over and over. A spoken vocal breaks the solemn spell cast by the music: it’s as if we had been waiting for a large enough gathering of spirits or people in meditation for an atmosphere to develop that will conduct power generated by thought and mindfulness to wherever the congregation wishes it to go. Quiet concentrated and single-minded intensity is the hallmark of this track, emphasised by licks and then melodies of sitar, long sinuous bass drone and deep resonating chanting vocals. Tempting to think these spirits or people have gathered in the hidden cave to plot against the repressive rule of the wizards over the land of Krull.

Bonus track “Asleep” is at once similar to and different from the previous two tracks. In structure it’s just as minimal and restricted: a basic rhythm structure of repeating prolonged bass tones, simple drumming and a pounding beat suggesting an endurance test of sorts. The track develops slowly by building up instrumentation and has the feel of a intense ritual. The difference is that there’s also a darker and less welcoming, more sinister and forbidding mood. The singing seems more inhuman, and guitars and a thin buzzy drone suggest an spacey alien atmosphere high above and below.

All three tracks are very atmospheric and mesmerising, incredibly focussed and intense. If there’s a fault, it is that the tracks are very low-key and, for some listeners, will probably be frustrating as they have no definite tension-releasing climaxes after long build-ups. If listeners pay very close attention, they will sense a turning-point after which a track will ease off and start to end. Codas may take some time to finish and even when silence appears, the ambience still takes time to disappear.

The band’s sound is quite clear, revealing a huge cavern of space in which the secret ceremonies are held and sinister figures in black sit or stand together to meditate and join their minds to create and sustain an unseen yet felt power. “Asleep” has a bluesy feel which at times gives the track a slight air of melancholy, even desperation, which might be unintended.

The debut album is a good start to what so far has turned out to be a steadily rising career, similar to the music itself, for Bong. Keep your ears close to the ground, men of Bong, the crescendo may soon reach its peak.