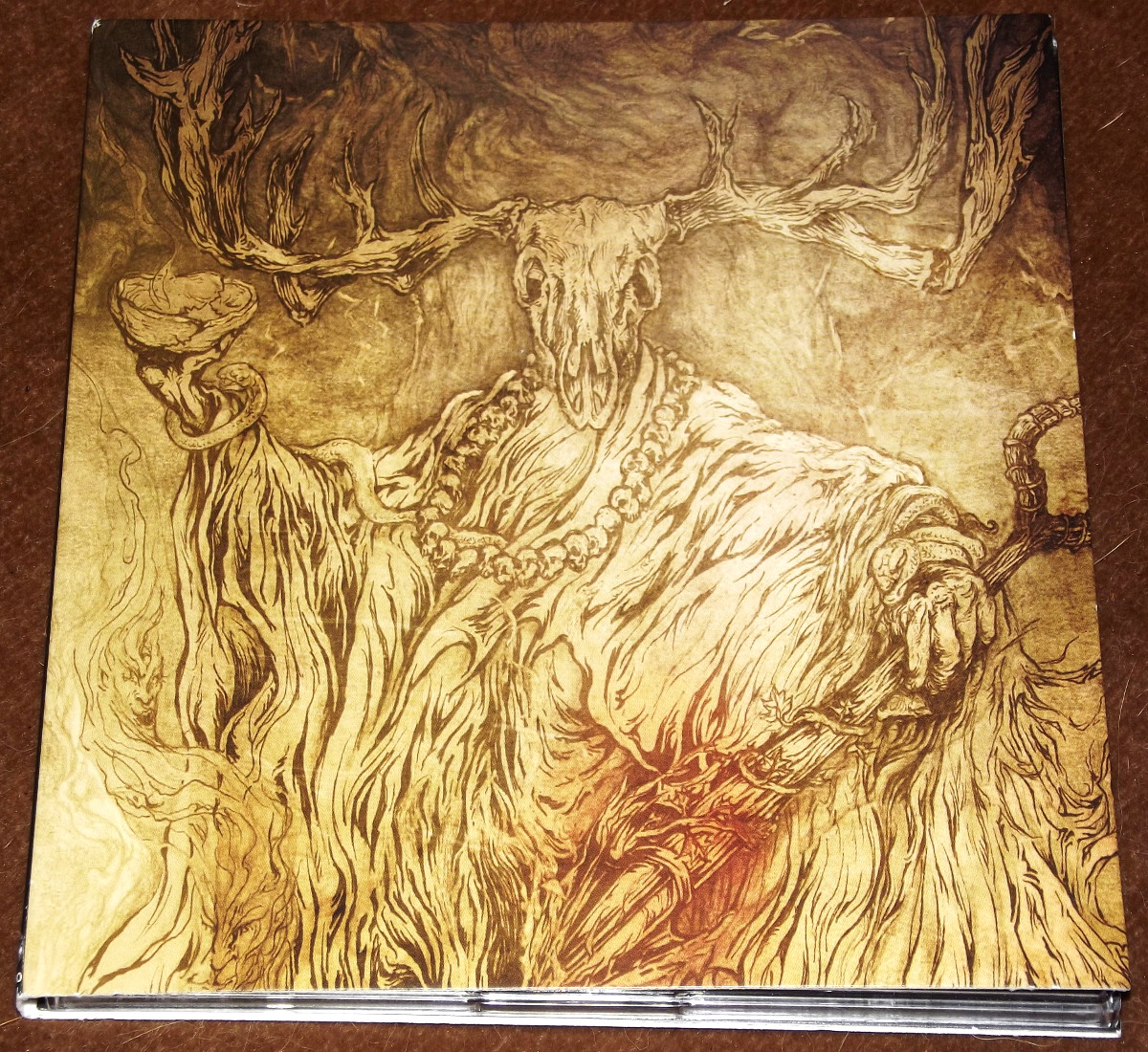 A celebration is in order for Crucial Blast Records with this album from Vancouver-based act Funerary Call, this being the label’s 100th release. Suitably the figure on the cover of this 6th album for the black ambient act is celebrating a well-earned rest, about to drink heartily of his mead; Cernunnos is the horned one’s name and it’s appropriate that he appear on this album as he was one ancient pre-Christian influence (he was originally a nature god of Celts living in western Europe) on the concept of the Devil in early Christian mythology. While Cernunnos relaxes, Funerary Call man Harlow Macfarlane conjures up a world of mediaeval hellfire from the manipulated sounds of guitar, violin and other instruments, electronics and field recordings. The music rumbles and stutters close to hysteria and insanity, and the atmosphere is cold and often dark.

There are just three tracks totalling 39 minutes and they probably describe a ritual of some sort. “Libations” and “Fragments” both feature deranged violin virtuoso performances from Lashen Orendorff while other musicians defer to his screechy delivery and provide consistent support for his maddened mewlings. The ambience on “Libations” is cold and alienating while Orendorff scrabbles furiously on his instrument; if it could speak, it would probably turn out traumatised from the abused strings.

The middle track “Fragments” is the core around which everything pivots. Macfarlane gets busy laying out electronics effects to create a mystery space void in which dark invisible entities float and lob about, rumbling deeply, groaning and farting, just so you know they’re not to be trifled with. In comes Orendorff’s violin bravely, questing in this indifferent space, appealing for answers to its questions of existence, sometimes being rebuffed, other times finding answers that yield yet more questions and conundrums. The track and its predecessor acquire their distinctive characters from the interplay between solo violin and its accompaniment. We follow Orendorff’s violin-playing respectfully and with some fear: the terrain to be traversed is uninviting and sometimes downright hostile, and we can never afford to relax in case unseen forces come and steal our souls forever. Even the violin acquires a dark and sinister edge as though the longer one spends in this subterranean hell, the more corrupted one’s soul becomes. As the track progresses, guitar echo effects start to take over in the background as the violin merges with other acoustic instruments.

Final piece “Transference from the Void” includes some very sonorous throat-singing from Ross Birdwise whose very name suggests someone who communes with nature and the spirit world as readily as the rest of us tweet or hit Facebook or Skype. Spirit beings squeal or moan in the background. This is a much more vocal piece than the previous two but strangely less creepy: the voices sound off against one another but it seems nothing of great consequence is happening here.

At times this is a suspenseful album of delicacy and beauty with a lot of thought put into the construction and delivery of sound fragments and snippets around the violin melodies and guitar effects. The tracks have a definite mood of cold rarefied black ambience. Even so, by the time we reach the end of the album, I feel we have travelled a lot in circles and covered the same parts over and over. The album is chiefly memorable for Orendorff’s violin soloing and the guitar bits which can be quite affecting.