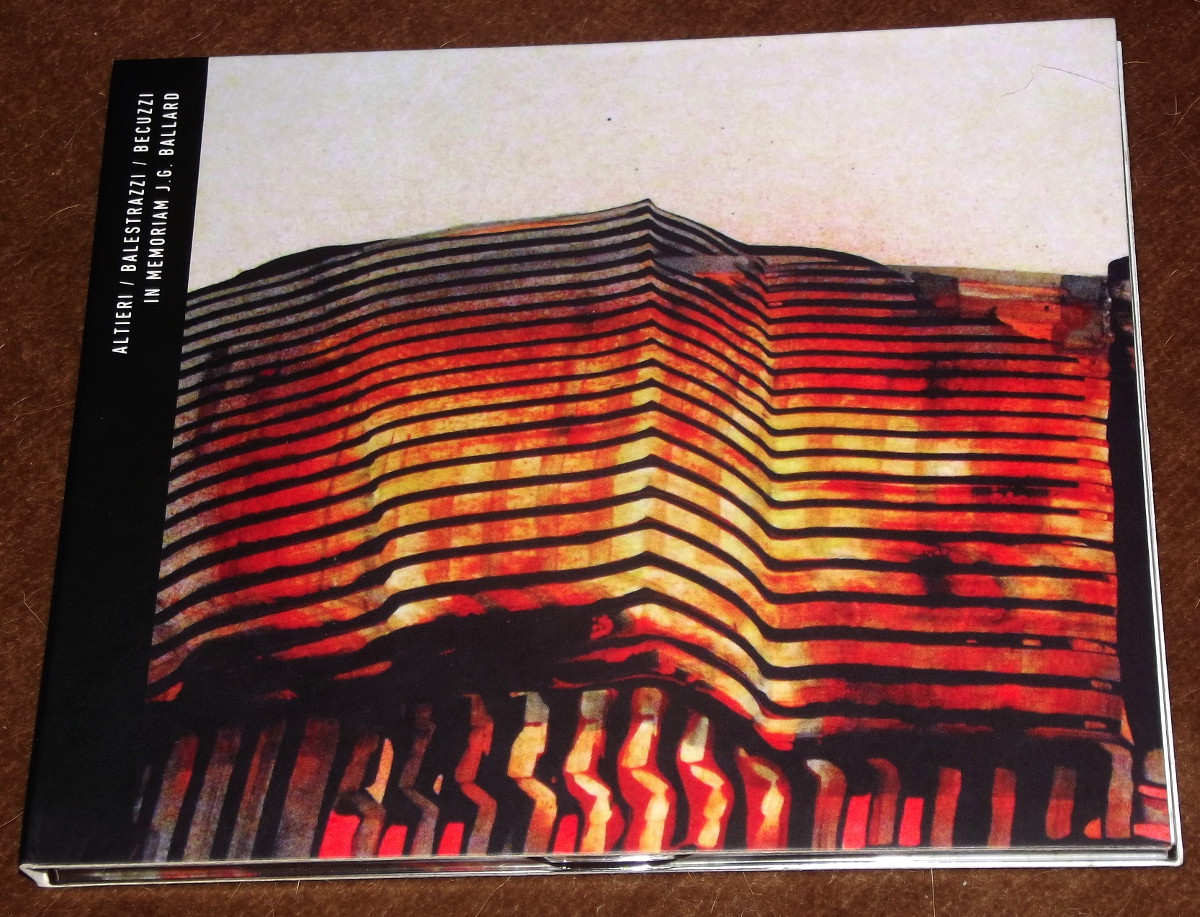 First work dedicated to the English novelist J G Ballard I’ve ever come across, “In Memoriam …” is quite a good album of melodic and rhythmic industrial/electronic music that attempts to capture something of the particular universe of the author’s novels which in their own way criticised the direction and values of Western society and the popular culture it produced. Each track is named after a novel that Ballard wrote and some of his more famous works like “Crash” and “The Atrocity Exhibition” are referenced.

To be honest, the music is more pleasant and even more unified than what I had expected. The entire album can be heard as one united work of slightly different chapters; I think Ballard’s work was rather more varied than that. Although there is plenty of power electronics hissing, seething and foaming to be found on a track like “Crash”, the industrial pulsating rhythms of that track are more soothing than alarming. I thought there would be screeching tyres, the shatter of windows and the scrunching of metal upon metal mixed in with the groaning and gasping and other mechanics of sexual intercourse to emphasise the central role that automobiles and highways play in our lives and how our relationship with the car and the petroleum that powers it is more intimate than the relationships we might have with members of the opposite sex (and sometimes the same sex as the protagonist of the novel discovers). “The Drowned World” sounds suitably aquatic but for me it doesn’t have that languid, enervated, passive atmosphere of the original novel in which the hero, a typical Ballardian blank-slate character, allows himself to blend into his changed environment and become part of its flow and rhythm.

After a while, I learn not to have high expectations of the music and start to enjoy it as something that works well by itself. A version of “The Atrocity Exhibition” that reflects the disoriented, schizophrenic, almost psychotic nature of the novel and its structure will eventually arrive; in the meantime, the track named after the novel is a busy creature of regular railway-train rhythmic structure, sharpish high-pitched drone and murky underwater ambience. Eventually the track becomes something the novel never was: monotonous and boring.

Yes, the music can be of a very interior nature and in parts is quite sinister and alien. There are some great atmospheres of smoky cloud and digital hissing created here. But I detect very little of that inquiring Ballardian mind and wonder at the extremes of human behaviour, how very irrational by narrow conventional parameters yet totally rational from Ballard’s point of view people can be in situations where the human-technological interface pushes people away from natural forms of intimacy and interactions into more machine-like and mentally disturbed behaviours.

The album ends more quietly than disturbingly: “High Rise”, far from being a ferocious, seething prison of very proper middle class English people who resort to ripping one another apart and the conspicuous consumption that follows when they find they cannot leave their apartment block, is an unassuming industrial-lite piece of pumping rhythm and sighing clouds of noise. Damn.

Hard to say if the man himself would be enthralled by the music on offer: in his last years, Ballard found and wrote himself very deeply into a niche of dystopian comedy about upper middle class lifestyles, the artificial, isolated environments in which they are found, the stresses such environments cause to people and how normal people turn into neurotic or psychotic nutjobs as a result. The music here might serve as a kind of muzak to that period of Ballard’s work. (Hmm, in that sense, maybe Ballard would like the music.) In some ways, Ballard’s death in 2009 might be the most ironic and Ballardian aspect of the man’s life since after 2009 our world has become more and more like the universe his pen created, in which democracy, community, equality, justice and freedom mean their polar opposites, Western humanitarian aid in Third World countries destroys lives and reduces survivors to neo-colonial slavery, people sneer at the homeless and desperate refugees, and modern medicine meant to heal people and reduce their pain instead turns them into rampaging killing machines.