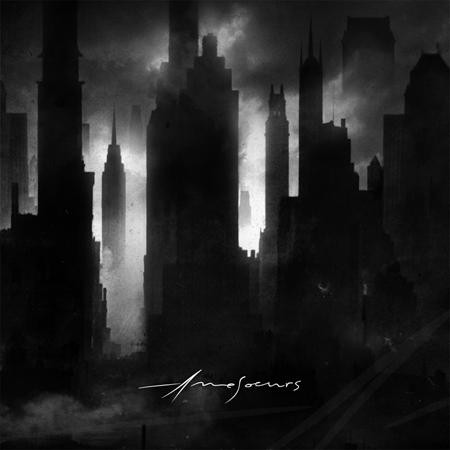 At least in a very short career, truncated in part by the unexpected success of Neige’s main project Alcest, Amesoeurs released its one and only full-length recording. The self-titled album is a wide-ranging work in expression and musical style from soft melodic pop to harsh and grim black metal to near-abstract guitar noise. The band takes as its inspiration the bleakness of modern urban life and the stress of day-to-day living in an industrial environment; in this respect, Amesoeurs is the dark twin of the lighter, more fantasy-inspired Alcest and it may be no surprise that the name “Amesoeurs” can mean “soul sisters”.

The album starts off on an optimistic note musically with “Gas in Veins” and “Les Ruches Malade” though there is the shadow of dark things to come on the second song. Gradually the album becomes rockier behind Audrey Sylvain’s fairly bland vocal. With “Recueillement”, the black metal heritage finally emerges with Neige’s raw screaming vocal and music with a hard noisy guitar shower edge though it is dominated by an urban blues style of playing and melancholy riffs. The lead guitar could almost pass for rather sorrowful banjo or mandolin, it has that doleful tone. “Faux Semblants” seems a fairly happy and carefree song (although the lyrics might be about isolation) but there is a dark soul within that puts it in company with the kind of material more northerly European bands like Lifelover and Circle of Ouroborus (both also BM-crossover bands) do.

On the whole the first half of the album is ambiguous with soft feminine pop-punk mixed in with some black metal / hard rock influence. The second half is a more schizophrenic beast, roving from harsh black metal guitar noise to the sweetest, most saccharine melancholy pop, starting with “Trouble (Éveils Infâmes)” which as black metal pop songs go is embarrassing:  only the instrumental part at the end, all screaming noisy power-electronics-styled feedback is the song’s saving grace that makes you forget what came immediately before it. It’s as if Audrey Sylvain and Neige have backed into their respective corners in a musical boxing ring and are trading blows that result in some very wild swings from one genre to another and back.

The next three songs swing Audrey Sylvain’s way for the most part apart from a frantic screaming second half to “La Reine Trayeuse” which comes as a shock to what had just been a fairly relaxed piece. This song is more remarkable for the distorted treatments applied to Sylvain’s vocal which affect the ambience of the music. Final track “Au Crépuscule de Nos Rêves” is very much a post-rock / black metal fusion piece featuring for the third time Neige’s black metal vocal as the main voice, at least until we reach the coda which turns out a stiff robotic techno-industrial looping rhythms with sinister falling guitar tones and a ghostly alien spaceship factory ambience in the background.

It’s to be expected with such wild extremes as the two genres of music featured that “Amesoeurs” isn’t a  consistent work: on several songs the combination of gritty black metal and Sylvain’s smooth singing doesn’t really gel together and the black metal pop is awkward in an almost self-conscious and embarrassed way. Even more purely black metal tracks like “Trouble (Éveils Infâmes)” have a half-hearted air about them, as if something essential to the song hasn’t worked out the way it should in spite of Neige’s efforts to perfect it. (And if Neige couldn’t do it then I doubt few others can.) The balance is roughly about two-thirds melancholy pop and one-third black metal: I’d have preferred a stronger and more equal blend of the two styles with a greater distortion of Sylvain’s voice and a stronger emphasis on mood and varied ambience. The wide open urban blues space that appears in the pop-oriented songs is effective in expressing the singer’s feeling of isolation and anomie but it also stresses the distance between the pop and the black metal so that the joins between the two are showing their stitches. This could have been a great album if the genres were in equal proportions and the production of the songs had emphasised moods particular to each song.

Pity in a way that Amesoeurs had to break up as this album really sounds like a warm-up to what could have been a better fusion of the two genres … though it’s equally likely that the black metal influence would wane even more and be little more than some edgy noise guitar in parts.